One of the Jalisco’s grandest religious festivals (rivaling that of the Virgin of Zapopan in fervor but not in size) occurs February 2 — the festival of the Virgen de la Candelaria, celebrated in many places, throughout Jalisco (Acatic, El Arenal, El Cabezon, Encarnacion de Diaz, Guachinango), but no place like San Juan de los Lagos (250 kilometers northeast of Guadalajara) in the Los Altos region of the state. 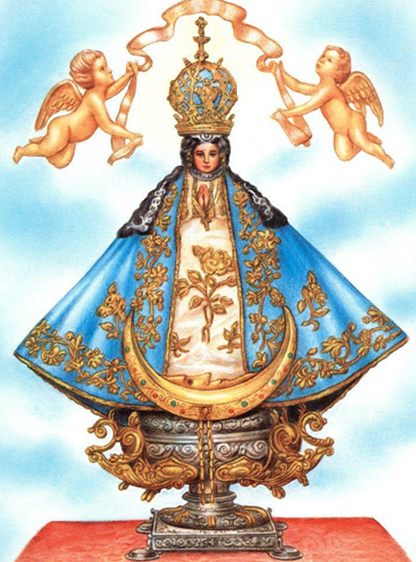 While the celebration in San Juan attracts fewer people than the Zapopan peregrinacion, it is not surpassed in an outpouring of devotion. Some 45 to 60 columns of believers, representing scores of municipalities from as many as 21 states, compose a National Caravan of Faith, the Republic’s largest pilgrimage on foot.

In order to reach San Juan in time for the ceremonies, columns from the State of Mexico traditionally start their long trek the first week of January. Groups from places such as San Miguel de Allende usually begin their rigorous highland hikes shortly after mid-January.

Local legend described the San Juan de los Lagos area as one of religious significance when the Spanish conquistadores arrived around 1530. Subsequent history notes the arrival of the Franciscan missionary Fray Antonio de Segovia — and the appearance of the tiny image (made of a light vegetable paste) of the Virgen de la Candelaria at about the same time.

Local history tells us that beginning in the 1600s a number of miracles were attributed to the Virgin. As word of these spread, pilgrims from the surrounding area began making regular visits to San Juan to worship her. But it wasn’t until 1880 that the Catholic authorities in Mexico City recognized the annual February gathering as an official, national peregrinacion.