In recent years, the town of Zapotlanejo, located ten miles east of Guadalajara, has staked a claim to fame by breaking the Guinness record – on various occasions – for constructing the tallest ever catrina. 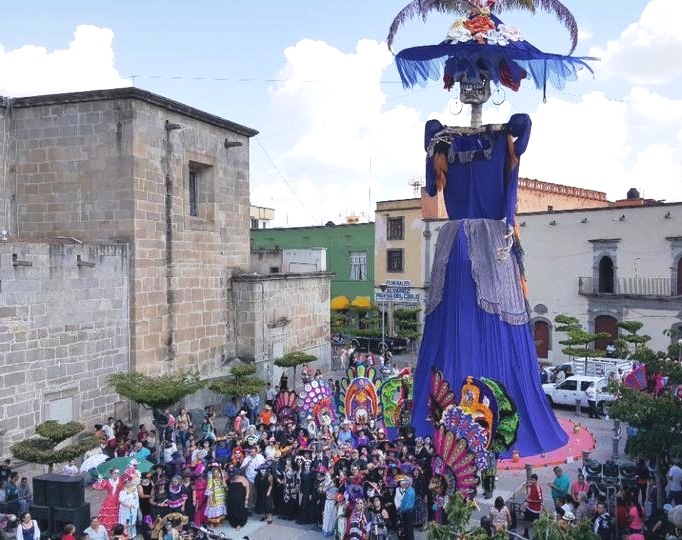 The townsfolk’s repeated efforts over the past decade have transformed a pueblo mostly known as a center for the manufacture and sale of inexpensive clothing into a magnet for visitors during Day of the Dead festivities. Hundreds of sightseers now make the simple journey to the town to admire and take photos of the massive catrina soaring into the sky over the town square.

This year, Zapotalenjo city fathers have designated their annual festival (the 11th edition) as Festival de La Catrina “La Novia de México.” Not only will the 20-meter-tall catrina be dressed in a enormous white wedding dress (setting a new world record for the biggest ever dress, organizers hope) but she will be accompanied by a slightly smaller and kneeling catrin, who will be offering his novia flowers in appreciation of his great love.

Zapotalenjo city hall has allocated more than 5,000 square meters of space in the downtown area for festival activities, which include the installation of an enormous seven-tier altar that in previous years has used 2,000 candles, 500 pieces of papel china, 400 oranges and 150 loaves of pan de muertos. Seven additional altars will be set up for viewing, each dedicated to a couple (keeping with the novias theme). Among the couples honored will be Frida Kahlo and Diego Rivera,  Romeo and Juliet, Hernán Cortés and La Malinche, and María Félix and Jorge Negrete. Exotic floral displays will also line the main pedestrian precinct.

To get to Zapotlanejo from Guadalajara take Avenida Lazaro Cardenas past the Chapala highway and the New Bus Station and continue on Highway 80 for about 12 kilometers.  Signs indicate the turn off to Zapotlanejo. From the Lake Chapala area, turn right onto the Macrolibramiento just after the turnoff to the airport. The toll road joins up with Highway 80 just before Zapotlanejo.