With charm and a slew of hilarious anecdotes, U.S. actor Peter Fonda held a captivated audience in the palm of his hand at a master class organized last weekend as part of the Guadalajara International Film Festival (FICG).

In conversation with Mexican actor and producer Diego Luna, the 79-year-old actor reminisced about the moment he and Dennis Hopper had finished writing the cult hit movie “Easy Rider.” 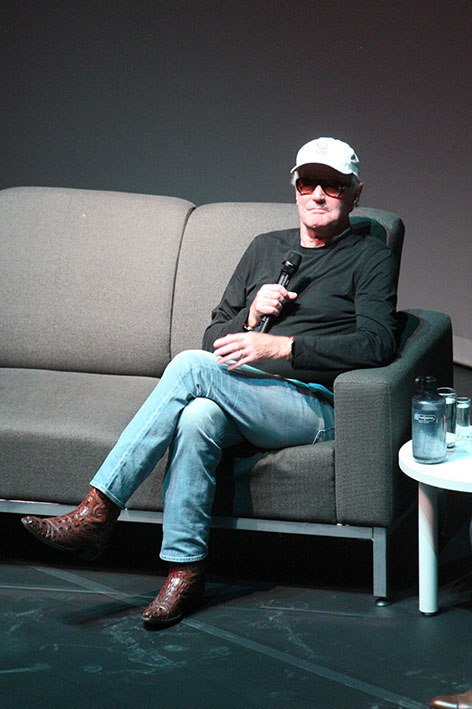 “We rolled a lucky seven,” Fonda said, acknowledging they had hit on an timely, untapped nerve that spoke for their generation.  The film – celebrating its 50th anniversary this year – was screened after the masterclass and the presentation of the International Mayahuel award to Fonda for his career in cinema.

With a wide-eyed Luna clearly impressed, Fonda related how Jack Nicholson almost didn’t appear in the movie as he was contemplating giving up acting at that time. Fonda also recalled how he insisted Nicholson play the role of the lawyer despite Hopper’s misgivings that he wasn’t from Texas.  “Jack” was also stoned out of his brain during several scenes  of the shoot, Fonda added to much audience laughter.

Fonda also spoke about his “difficult” early life as the son of a famous actor, Henry Fonda, who would simply “disappear” for long periods of time. Fonda said he wished he had known that it was because he was working.

Fonda found solace in the world of performance and he and his sisters would put on plays for “the help” – housekeepers and governesses – whom he considered more as family.

At 19, he confirmed his life’s vocation while onstage playing a drunken choirmaster so convincingly that he heard one of the audience members (a friend of his aunt) whisper, “Oh my God ... he’s drunk.” Fonda recalled that later that night his aunt confronted him about his sobriety and at that moment he understood just how much he wanted acting to be a part of his life.

Fonda also advised budding actors to never say, “I want to be an actor.”  Rather, he said, “it’s better to opt for ‘I want to act.’ The same goes for any vocation. By using a verb, it emphasizes that this is what you want to do.”

Fonda also showed a sentimental side when talking about the efforts he made to be present at his children’s graduations, because his parents never attended any of his.  At the time of the graduation of his daughter Bridget, he was on set in Europe but took three flights, including two private jets, to get to the ceremony with 45 minutes to spare.

Fonda also appeared to get slightly choked up as he recalled his role as a beekeeper in “Ulee’s Gold,” which garnered him his only Oscar nomination.

Fonda received a standing ovation after the conversation with Luna concluded. He had ingratiated himself with the Tapatio audience early during the talk, after coming onto the stage with a leather jacket swung over his shoulder and a water bottle in hand. He declared that the jacket was a prop and that the water was the second most important fuel for humans after oxygen. The actors were subsequently brought shots of tequila, at which Luna joked, “Agave, the third most important fuel for humans.”

“Viva Guadalajara!” Fonda intoned to a great cheer as he slugged back his shot.