“The Heiress,” directed by Roseann Wilshere, is delighting Lakeside Little Theatre audiences and earning standing ovations each night. Written by Ruth and Augustus Goetz, the play – first staged in 1947 and subsequently made into a movie in 1949 – is based on the 1880 Henry James novel “Washington Square.”

Jayme Littlejohn’s portrayal of plain and shy heiress Catherine Sloper is sensitively drawn. As the plot unfolds there are sympathetic murmurs from the audience at her compelling performance. 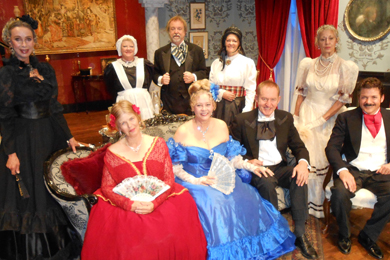 Interaction between Catherine and Morris Townsend (Ken Yakiwchuk) ranges from teasing to passionate as it builds up to the denouement, holding the audience firmly captive throughout.  Yakiwchuk’s character oozes charm and duplicitousness in equal measure. This adds to the tension when Dr. Austin Sloper, Catherine’s tartarian Victorian father, played to perfection by Tony Wilshere, suggests Morris is only after her inheritance. It is hard to believe that this is only Wilshere’s second acting venture.

In one of her best performances at LLT to date, Diana Rowland is very convincing as Catherine’s elegant and scheming aunt, Lavinia Penniman.

Elizabeth and Marian Almond (Arleen Pace and Caroline McCormack) together with Marian’s fiancé Arthur Townsend (tyro actor, Geoff Long) skillfully add essential background and texture to the main storyline as they come and go. So too does Mrs. Montgomery (Kathleen Morris) as Morris Townsend’s sister, who delivers the famous line, “I think, Doctor, that you expect too much of people. If you do you’ll always be disappointed.”

Judy Long, as Maria the maid, is kept on her toes throughout and definitely knows her role, and her place, with her faultless Irish accent and bobbing curtsies.

The scene is the parlor of Dr. Sloper’s Washington Square mansion, New York City in 1850, and the curtain opens to spontaneous and unanimous applause for the magnificent set. The exquisite palette, decoration and furnishings make it undoubtedly one of the best seen at LLT in recent years and showcases the many artistic talents essential to its creation. There are nine people on stage with 53 more working behind the scenes on this production.

Hamilton also created a stencil from x-ray film, for the realistic “silk” wallpaper’s pattern. Dana Douin applied it and made it appear embossed. Alan Bowers made the base-board and trim convincingly 3-D and Maritza Bayer painted a convincing “stair-carpet” and made top treatments for the curtains.

The set provides a perfect back-drop for the beautiful period costumes. Karen Eichler designed them and seamstress Joanna Clark undertook all necessary alterations, including remodeling hats to reflect the styles of the 1850’s.

Neither do lighting operator Richard Roche or sound operator Douglas Pinkerton (not to be confused with his father, Alex!). Lighting technician was Pierre Huot and sound technician was Karen Lee.

The musical theme, “Plaisir d’Amour,” echoes the 1949 movie and Montgomery Clift’s rendition of Martini’s 1784 song, accompanying himself on the spinet. Given the period, the choice of a modern, vocal version is unfortunate, particularly as the music plays over the last few lines of Act I Scene I, rendering them inaudible.

Gale Bildfell and Mary Anne Molinari did a good job on props, especially during the many scene changes working in the black.

The bar’s been raised again. Thanks to Roseann Wilshere’s very professional direction and the expertise of everyone involved, this production of “The Heiress” throws down the gauntlet and leaves an impressive legacy as the standard by which other LLT shows may be judged this season.