Enter “Jerry Brown Travels” into your search engine and you will come up with a site of nearly 160 YouTube videos that Jerry Brown and his wife Lori have compiled over the last two years during their travels throughout Mexico and Southeast Asia.

Their mission: to educate people on how to retire on a budget.

With more than 3,000 subscribers, the Browns’ travel and retirement blog is not a money-maker but a labor of love.

“I started doing this because I was concerned that many people couldn’t afford to retire in the United States or Canada, mostly because of the cost of living and medical care,” says Jerry.  “We wanted to provide them with other choices and we report on places we have been, like Thailand, Cambodia and Mexico. Sometimes we interview people and other times Lori and I are simply reporters.”

Once they moved to Ajijic in 2008, Jerry discovered that he needed a creative outlet. “Since I didn’t know a thing about creating YouTube videos, I searched online how to make my own, actually watching instructional YouTube videos.”

With Jerry and Lori’s love of traveling and conversing with locals, this became the ideal hobby, and their first efforts were mainly travel videos. 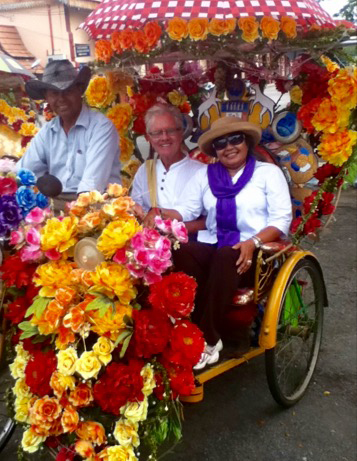 Says Jerry: “We filmed houses that had barbed wire and glass as a security system, which intrigued us. One of our more popular videos was, ‘Is it safe to live and travel

in Mexico?’ People seem very interested in that subject. While in Asia, we created a video covering the cost of hotels, apartments and food, and how much it would cost to live there on on a monthly basis.”

Their equipment consists of three things: an iPad, an iPhone and a tripod. How they find people to interview is simple.

“Living in Ajijic, we just ask around,” says Jerry. “Everybody is so friendly here. We also find people through word-of-mouth. We may be in the plaza having coffee and soon we’re conversing with strangers and giving them information about Mexico. Next thing we know, we’re interviewing them.”

Lori chimes in: “Sometimes, people will spot us and say, ‘I know you; I follow you on YouTube. One lady said to me, ‘I remember your smile!’”

Other subjects in their videos include low-cost rentals, homes for sale in Mexican beach communities, driving through Mexico, and Mexico’s medical insurance. There is an active comments page where readers can also post questions.  They also cover visas, Social Security and banking issues.

Presently, the couple are putting their focus on people who have retired in Mexico, including those in their 40s.

Says Jerry: “In the future, we want to expand deeper by producing videos on medical care. We plan to interview doctors, dentists and long-term care experts. We also want to cover the topic of whether it is better to rent or buy in Mexico.”

Ten years ago, the Browns retired, sold their home and landscape and architectural design businesses in Hawaii, and embarked on a six-year journey around the world, seeking out their ideal place to retire.

“We’ve traveled to 35 countries and, always in the back of our minds, was the question, where would we would like to retire that’s affordable,” says Jerry. “Back in 1972, when I was traveling through Mexico, living out of a Volkswagen bus and surfing, I read an article about Lake Chapala, that it was the largest expat community in Mexico on the largest freshwater lake and an artist village. That article always stuck in my mind. I finally made it here 37 years later, taking Lori with me. We had been coming to Mexico for the last eight years and found that Ajijic met all of our stuff on the bucket list … and we’re still here.

“Our plan is to use Ajijic as a home base and travel to other countries and within Mexico two to four months per year. Our next trip will probably be to Cambodia or Cuba. Lori is from Cambodia and still has family there.”

Lori adds: “The reason I want to go to Cambodia is to visit my 91-year-old aunt who basically raised me. My mother died when I was four years old and my aunt adopted me. She tells me, ‘You’d better visit me now because I don’t know how much longer I’m going to be around!’”

For more details, search the internet for “Jerry Brown Travels,”