There are two questions that many people ask themselves about vaccines: “Are they safe?” and “Do they work?” 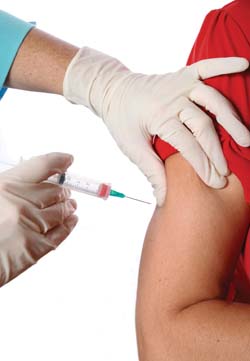 Regarding safety, they have sometimes been deadly. In 1919, one of the first diphtheria vaccines killed ten people. In 1928, a newer diphtheria vaccine was used, but 12 children died. In 1948, 68 children in Japan died from diphtheria vaccine. From 1955 to 1961, many people in the United States were potentially exposed to a cancer-causing virus from polio vaccines. In 1955, 460 people actually got polio after being vaccinated against polio. Other risks of being vaccinated can include allergic reactions and paralysis from a syndrome called Guillain-Barré.

But what are the real relative risks for someone getting a vaccination today? The 1919 incident using an early toxin-antitoxin vaccine was a disaster, and abandoned in 1920. The children who perished in 1928 died of bacterial infections after the vaccine was contaminated during use. Thiomersal, which had just been invented in 1927, was added to multi-dose vaccines in 1930. The threat of contamination was eliminated. The polio vaccine contamination happened because the SV40 virus was not discovered and known to exist until 1960. When it was discovered, the risk was identified and resolved. Cutter Laboratories’ polio vaccine caused polio because it did not completely inactivate the virus in the production (similar to the problem that killed children in Japan from the diphtheria vaccine).

Early vaccine development had some problems. Mistakes were made and lessons were learned. The technology and knowledge we now have makes past incidents very unlikely to happen again.

Although some people feel that vaccines are responsible for many problems today, most are unrelated events (i.e. patient X was vaccinated yesterday, and today the patient choked on a chicken bone while eating. Therefore the vaccine caused the patient to choke). The most common risk now is a fever and aches after the vaccination. This is caused by your body thinking the vaccine is the actual disease, and mounting a defense against it. The vaccine is made to mimic the actual disease-causing agent, so you can get some of the same “symptoms” of getting the disease, but do not get the actual disease. Fever, for example, is caused by the body’s immune response, not directly by the bacteria or virus (the Yellow Fever vaccine can cause you to have aches and fever, but you will not get liver failure and die as you could with the actual disease). Allergies are extremely rare. However, if you are allergic to eggs (or other ingredients) you should see what is used in the vaccine production.(www.cdc.gov/vaccines/pubs/pinkbook/downloads/appendices/B/excipient-table-2.pdf).

Guillain-Barre is a disease where your own body attacks the insulation of your nerves. This happens when your body is exposed to something and makes antibodies against it, but “it” looks too much like your own nerves so your immune system attacks them. Guillain-Barré usually resolves itself within weeks to months, but can leave the person with some permanent effects such as a limp, or it can in rare cases progress as far as death. This can happen from some vaccinations. Keep in mind, however, that the vaccine mimics the real infectious agent. If the vaccine can cause Guillain-Barré, so could the actual disease that you could get if you were not vaccinated.

The effectiveness of vaccines varies. The flu vaccine, for example, varies depending on age and health of the person, and how well the vaccine is matched to the strain circulating. At worst, it can be about 40 percent and at best about 90 percent effective (www.cdc.gov/mmwr/preview/mmwrhtml/rr6207a1.htm?s_cid=rr6207a1_w#InfluenzaVaccineEffectiveness).

If the current risk of getting the disease is zero (such as smallpox), and the risk of a reaction to the vaccine is 1 in 100,000, you are safer not getting the vaccine. If the risk of getting a disease is high (such as influenza), and the risk of a reaction to the vaccine is low, you should get the vaccine. The incidence of Guillain-Barré (a possible side effect) is about 3,000 to 6,000 people a year in the United States. You could get Guillain-Barré after vaccination, or you can get it from the actual disease – the odds are about the same. Meanwhile, in the United States alone, 3,000 to 49,000 usually die of the flu. Vaccines have risks, but the risks to most people from not being vaccinated are much worse.

Note: People who should not be vaccinated are those with compromised immunity and known allergies or dangerous reactions to vaccines. If in doubt, check with your doctor. Taking anti-inflammatory medication or paracetamol/acetaminophen before or after vaccination to reduce the symptoms will also reduce your immune response, and lower the effectiveness of the vaccination.