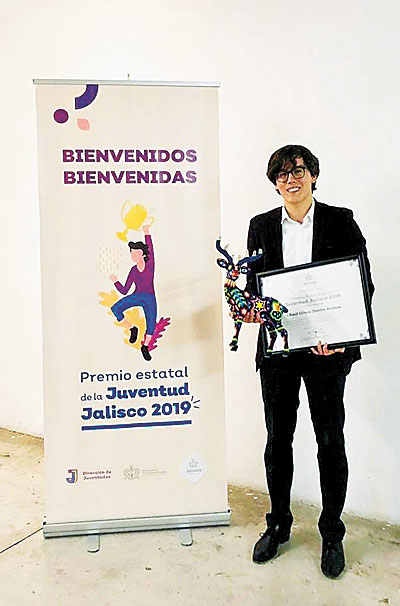 The 18-year-old pianist won the prize in the category of culture in recognition of his mastery, dedication and trajectory as a musician, taking away a framed diploma and a handsome hand-beaded deer sculpture made by Wixárica artist Miguel Bonilla. He learned of the prize just days prior to heading off to the United States, where he will continue his training under a scholarship granted by the Manhattan School of Music.

Born in Guadalajara, Ibarra was raised in Ajijic and Jocotepec, beginning piano lessons at the age of seven with local teacher Cecilia Garduño Ochoa. He continued studies in piano and also picked up the violin at the Regional Center for Musical Studies (CREM) in Ajijic. In 2012 he enrolled in the University of Colima’s Institute of Fine Arts, refining his keyboard skills under the tutelage of professors Anatoly Zatin and Vlada Vassilieva.

Ibarra made his debut as a concert soloist in 2013 with a performance of Haydn’s famed Piano Concerto in D major. Since then he has racked up numerous awards and accomplishments. In 2017, he was the first Mexican selected among 650 participants from 22 countries to participate in the International Tchaikovsky Competition for Young Musicians held in Astana, Kazakhstan.

Last year he became the top award winner at the Carmel Klavier International Piano Competition for Young Artists in Indiana, earning the Grand Prize in the Piano Concerto Division, Grand Prize in the Contemporary Composers Division and second place in the Advanced Soloist Division.

Thanking the Jalisco Youth Directorate for his latest award in a Facebook message, Ibarra expressed pride in departing his homeland “with the great honor and responsibility of being a Mexican and Jalisco music ambassador.”