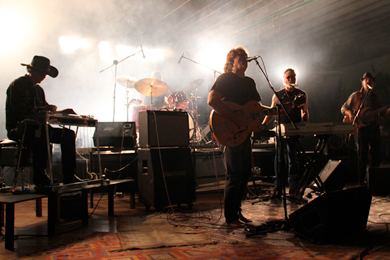 Lakeside’s popular TallBoys Band headed for the border late this week for a guest appearance at the famed Pecan Street Festival in Austin, Texas and a series of one-night stands at four other leading Hill Country venues.

Seasoned rockers David Truly, Flip Nicholson, Joel Barker and Dale Hetler are ready to rip the Texas music scene with a repertoire of classic hits from the 60s and 70s and a list of original Mexico-colored tunes that have earned them a faithful following among Baby Boomers settled on Lake Chapala’s shore and other leading expat retirement havens.

The Pecan Street Festival is renowned as the oldest and largest annual festival of arts held in central Texas, attracting crowds of more 300,000 to its two-day program of activities. The TallBoys will perform Sunday, September 30, 5 p.m., at the event’s main stage.

The band kicks off a five-day show itinerary with a September 29 gig at Poodies Hilltop Roadhouse, the Spicewood hot spot known for hosting music legends like Willie Nelson, Jerry Jeff Walker, Billy Bob Thornton and Asleep at the Wheel.

The group is also lined up to play to Austin audiences at Saxon Pub and the Beale Street Tavern, wrapping up the tour at Wimberley’s Buzzard Bar.

As they warmed up for the sojourn, the big guys with the big sounds holed up last weekend to shoot video scenes for the title song of their newly released CD “On Your Own, ” a thumping sentimental tribute to departed friends who marched through life following the beat of a different drummer. The video is being put together by Guadalajara’s CobraFilms under the direction of award-winning film-maker/videographer Ivan Lopez-Barba.

The group’s first recording, “Somewhere in Mexico,” has played on air waves around the globe and generated brisk sales in this neck of the woods.