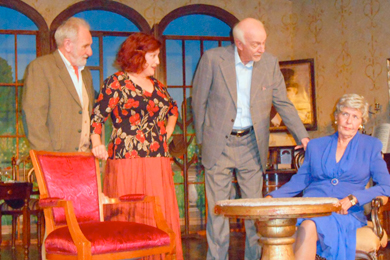 The first one out is supposed to set the bar for the rest. Certainly, this season’s opener for Lakeside Little Theatre, “Quartet,” set the bar with altitude high enough to promote nose bleeds.

The play by Ronald Harwood about over-the-hill opera singers living in a home for such might have been sad … and occasionally it was. However, with the zingers zinging to the right beat and the poignant moments making their bulls-eyes, what could have been sad, becomes an often funny re-affirmation of life, talent and love.

Director Ann Swiston did a remarkable job with the technical machinations of the play. Everything moved like silk on a brilliantly designed, constructed and decorated set. But Swiston’s real genius was in the selection of her cast. The four are all experienced, talented and relentless actors, who picked up the tale and moved with it.

Kathleen Carlson as contralto “Cissy” Robson was keen and comfy in her skin with nary a miss from her sweet, somewhat addled and practical character. Roger Larson as tenor “Reggie” Paget moved from the tranquil, self-satisfied and rational retiree to histrionics involving lime marmalade in stunning flashes that kept the audience alert. Baritone “Wilf” Bond was played by Dave McIntosh, who utilized the ribald, smarmy and licentious nature of the character to the hilt, but leaving it behind and moving into great sensitivity when the time was right. Peggy Lord Chilton became diva soprano Jean Horton, showing just enough of her layered pain and panic to make the character breathe.

The play, with its plethora of words, could have been slow or even boring. It wasn’t. In fact, audience members were stunned that so much time had passed at the ends of both the first and second acts. None of the players deserted their characters for even a nano-second. It was nothing short of sterling!

The stage manager was Win McIntosh, assisted by Daphne Peerless, and the production assistant was Phil Shepherd. The set was constructed by Alex Pinkerton and his crew, David White, Brain Selesky, Mark Schwimmer and John Blackmer. Stage decoration was by Terri Hensley and the set painting by Dana Douin, Roberta Hilleman, Daphne Peerless, Rod and Terri Hensley and Peter Luciano.

Karen Lee was in charge of props and Richard Roche operated the lights. The director designed the sound that was operated by Karen Lee and David Hutchinson. Karin Eichler handled the wardrobe assisted by the Season 48 Dresser Team. Makeup was by Maxcine Tate and the Season 48 Makeup team members.

Saving the best for last – the finale of this work is actually the glorious quartet from the third act of Verdi’s “Rigoletto” being lip-synced by the cast. The music, of course, is monumental but even greater is that each actor found his range as sung in the recording and followed it perfectly. I say “perfectly” because if there were smoke and mirrors involved, I couldn’t find them. Amazing!Giuseppe Verdi would have been proud.

Next up at LLT will be “I’ll Be Back before Midnight” by Peter Colley, directed by Roseann Wilshere, running from November 3 to November 11.