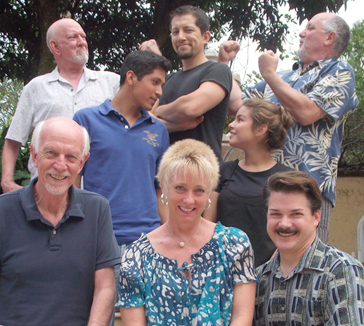 “The Fantasticks,” one of musical theater’s most beloved hits, is now on the boards at the Plaza de la Ribera (formerly Sol y Luna) theater, located at Rio Bravo 10 on the west end of Ajijic.  Five more shows are scheduled from November 24 through December 2.

My, My, How Nice Productions has put together what promises to be a terrific cast to tell the classic story of star-crossed lovers.

Interestingly, headliners in the show are talented young local thespians. The ingénue role is being played by Marie Claire Figadere (French and Mexican by way of France) and her swain by Mexican teenager Christian Garcia Duran.

The role of “El Gallo,” who narrates the tale of the two young lovers, is interpreted by accomplished Guadalajara native Eduardo Munozuniga.

Written by Tom Jones and Harvey Schmidt and first performed in 1960, “The Fantasticks” is a staple of regional and community theater.  Director Roger Larson has performed in the play professionally and knows it well.

The music direction is in the capable hands of Timothy G. Ruff Welch and Judy Hendrick.

This is a show that will leave you humming favorites tunes such as “Try to Remember,” “Soon it’s Gonna Rain,” “This Plum is Too Ripe,” “They were You,” “Round and Round” and more.

Get your tickets now. They are on sale for 250 pesos at Diane Pearl Colecciones and Mia’s Boutique.

Don’t forget that the San Pedro Restaurant and Gallery in the same building as the theater will be open. Check out the art show there with new works by Linzy Roberts, Dona Johnson and Susan Smith.