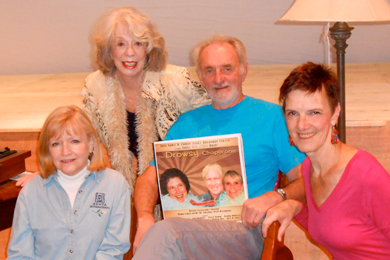 Lakeside Little Theatre (LLT) is putting the final touches to the elaborate sets for their annual musical comedy.

“The Drowsy Chaperone” features wild stereotypes, great songs, glorious music, fun, romance and lots of giggles.   It runs from February 16 to February 26.
The Tony award-winning show – written by Bob Martin and Don McKellar with music and lyrics by Lisa Lambert and Greg Morrison –  ran in New York for more than 700 performances and is a favorite with musical comedy aficionados.

A parody of a 1928 musical, “The Drowsy Chaperone” utilizes 22  singers and dancers and a live eight-piece band. The script, libretto and  score set up an infectious humor just right to make you forget your troubles and just kick back for a real good time.
The production is directed by Dave McIntosh, who has more than 50 play credits on his resume. He’s being assisted by Ann Swiston, with Barbara Clippinger doing the choreography and Judy Hendrick directing the music (and her “hot stuff” band).
Tickets are 250 pesos and go on sale Thursday, February 14, 10 a.m. to noon at the LLT box office. The box office will be open during those hours every day during the run of the play (until sold out – and it does happen).
Show times are 7:30 p.m., with the Sunday matinee at 3 p.m. The bar and the box office are open one hour before curtain. For more information concerning any changes in your reserved seating or dates, call the box office at 766-0954.