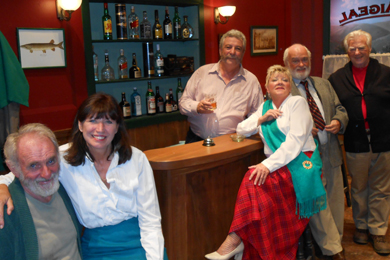 “Local Hero” is the opening production of Lakeside Little Theatre’s 49th Season. The comedy-drama is directed and adapted for the stage by Neal Checkoway, from Scottish writer-director Bill Forsyth’s original 1983 screenplay which starred Burt Lancaster and Peter Riegert.

It tells the tale of a Texas oil man, ‘Mac’ Macintyre, who is sent to a small Scottish coastal village by his astronomy-mad boss, Felix Happer. Mac’s mission is to buy out the locals so that their peaceful fishing village, Ferness, and the surrounding area can be totally destroyed for the construction of a major refinery project. The story evolves with some unexpected and endearing twists.

Casting such a large production is never easy at LLT, especially so early in the season, but Checkoway has done a great job. The main characters work very well together and are all entirely plausible and cohesive in their roles. 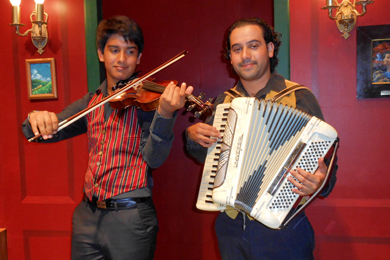 Patrick DuMouchel and Mark Bennett are extremely well cast as Macintyre and Happer, the American oil man and his boss. DuMouchel is a strong presence with just the right amount of understatement, as he carries the storyline throughout.

Bennett is exceptional as the whacky boss, fixated on Virgo and the night sky and proves an irresistible comedic force. In the early moments of both acts there are a confusing few minutes when Happer’s psychologist Moritz, played by director Checkoway, inexplicably appears and delivers his lines through the Fourth Wall while gurning at the audience. Once over, the play returns to its natural pleasant and mesmerizing rhythm.

The decision to use Scottish accents is unfortunate as dialects seldom work well or consistently. Even professionals find them difficult and a good coach and ear are essential. Pierre Blackburn (Edward) and Don Chaloner (Andrew) managed very well, but with two true Scots in the cast, the rest of the cast sound more Irish than Scottish, which sometimes distracts the audience from the dialogue.

Fred Koesling successfully maintains a heavy Russian accent throughout and even sings, ‘I guess I’ve always been a rover’ with gusto at the Ceilidh, in his role as Victor the Russian fisherman.  The beautiful live violin and piano music from Chuni and Juanpi Médeles Córdova was a nice touch and a real scene-stealer.

The beach-dweller Ben Knox was played, in his inimitable style and native Scottish accent, by Dave McIntosh who emerges at intervals from his shack on the beach with comedic results.

Incorporating the space in front of the stage, with the beach on the apron in front of the proscenium, the stage itself is part of an inspired set design by director Checkoway. Kudos to the set construction crew: Alex Pinkerton, Richard Bansbach, Bryan Selesky, John Blackmer, David White and set decoration team: Alan Bowers, Roberta Hilleman, Margo Eberly, Maryann Gibbard on a superb job. Kudos too to the unknown heroes responsible for their impressively rapid and silent set changes in the black.

Everything about Local Hero is exceptionally good and well thought out. It’s a thoroughly enjoyable ‘must see’ and sets the bar extremely high for the rest of season 49. Congratulations all round.