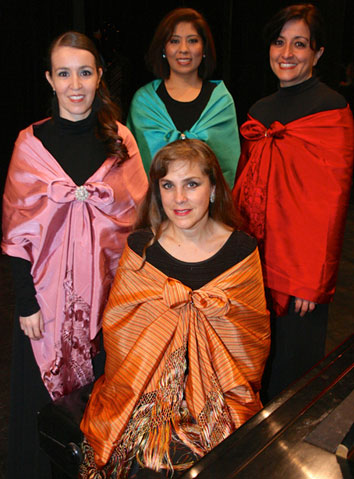 ¡Viva La Música’s! presentation of The Three Sopranos at the Auditorio de la Ribera on January 23 with their selection of Songs of Latin America, was a great success.

In 2011 sopranos Berenice Barragán, Viviana Báez and Dolores Moreno started a project to produce and perform iconic Latin American songs that integrate their three voices and maximize the individual characteristics of each voice.

Moreno was indisposed, so mezzo-soprano Patricia Hernández took over her role. She, and sopranos Barragán and Báez, were accompanied by pianist and soprano Gabriela Zepeda who provided the fourth voice for several songs.

On an empty stage, clad in long black skirts with identical blouses (Part I) or shawls (Part II) in complementary colors, and without a microphone in sight, the three stood at their music stands beside the grand piano where Zepeda sat.

The resonance of their beautiful voices and beautifully judged accompaniment were self-evident with the opening song, “Bésame Mucho” by Mexican Consuelo Vléaquez’. The polyphonic harmonies became increasingly breathtaking as the concert progressed, as did the quality and complexity of both the singing and piano playing — intensifying the approval of the audience!

Songs from Brazil, Peru, Argentina, Cuba, Uruguay and Venezuela, some familiar and some not, were superbly delivered and consistently well received. There is no doubt that this was due in large part to the highly trained musical expertise and the broad range of experience of the performers themselves.

Barragán took Master Classes with Sergio Hernandez and Dr. Harlan Snow. A member of multiple choral groups, she has performed with the Ensamble Filarmonico de Guadalajara and throughout Jalisco and has participated in the recording of five CDs and four DVDs.

Báez took Master classes with leading voice exponents including David Small in the U.S., Monica  Benvenuti in Florence and Michael Chance, the British counter-tenor. A member of La Lira de Orfeo in Guadalajara and a professor of voice since 2006, she sings in choral groups including the Capella Arte Vocal quartet; Deus, the sacred music group and the baroque Antico.

Hernández has sung in many operas and as a concert and recital soloist while Zepeda is a composer, youth choir conductor, teacher and accompanist. The pair recently performed at the extremely popular pre-Christmas ¡Viva! Ajijic, concert, The Hermosillo Family and Friends.

Báez became aware that some in the audience were struggling to follow her comments in Spanish. She effortlessly switched into perfect English when introducing the rest of the show.

It was obvious from the extended applause after every piece, that the skills and talents of the four were greatly appreciated by their audience, as was the choice of repertoire.

After intermission the trio sang a Mexican medley by Maria Grever. Viviana led off with “Alma Mia,” then Patricia sang “Despedida” followed by “Asi” by Berenice. During the second half of the program, the piano added a stronger, more influential element to several pieces, adding an impressive new dimension to the overall impact.

It was a truly magical evening. Few in the audience escaped being affected by those exquisite harmonies. Some triggered a few tears, while others effortlessly provoked goose bumps.

The finale arrived all too soon and, once the applause had faded sufficiently, the four sang an encore before leaving the stage to a prolonged standing ovation.

The next ¡Viva la Musica! concert will be the Catasis Piano Trio featuring Diego Rojas, violin, Yalissa Cruz, Cello, and Julieta Azalea Beltran on piano, at the Auditorio on March 27.