Fearless female equestrians will make an encore appearance at Ajijic’s Lienzo Charro bullring, Saturday, May 11 for the Feria de Escaramuza team riding tournament. The competition starts at noon, complemented by a Mexican-style food fair set up on the grounds.

For those unfamiliar with the sport, escaramuza tournaments involve drill teams made up of eight riders who mount sidesaddle while performing dramatic high-speed routines set to a backdrop of traditional Mexican music. Each team appears in distinctive coordinated outfits, opting for either the full-skirted Revolution era Adelita style costume or the lady’s version of the tailored charro suit. 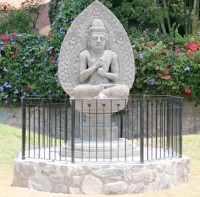 Ajijic’s waterfront park has been embellished by the installation of a towering stone fountain and statue of Buddah donated to the town by private sponsors. The fountain will be dedicated to the memory of Julia Ramos, Neill James, Juanita Reed and Zara Alexeyewa in gratitude for their contributions to the community.

Chapala will celebrate International Dance Day with a lively festival scheduled for Saturday, April 27, 6:30 p.m., at La Vela plaza, located at the west end of the waterfront Malecon. Admission is free to the public.

Posada Axixic will host a three-day exhibition showcasing arts and crafts produced in the lakeshore region, running Friday, May 3 through Sunday, May 5.

The ex-Hacienda de Huejotitan will be the setting for a concert by the Chapala Orchestra on Saturday, April 13, 7 p.m.

Eighty-one artists, members of the Ajijic Society of the Arts (ASA), entered and exhibited 200 pieces of artwork into the 30th Annual Judged Show on March 16 at the Ajijic Cultural Center. It was a stunning show featuring high quality work created by talented Lakeside folks. The categories and winners are listed below.

Sabado #1, the first in a series of Saturday cultural activities to be held once a month at Ajijic’s waterfront Malecon, will take place on March 16.