John Henry Browne.  Do you recognize the name?  No, well how about Ted Bundy?    Many more “yes” answers on that one I’m sure.   Here’s the connection.  John Henry Browne was the infamous serial killer’s defense attorney.   Browne has recently published his autobiography, “The Devil’s Defender.”

What started out as a journal seven years ago, and meant to be a personal therapeutic purge, has become a bestseller in which Browne recounts his gut-wrenching education in what it means to defend the reprehensible.  Although his name will now forever be linked to Bundy’s, there is so much more to this anti-death penalty advocate. 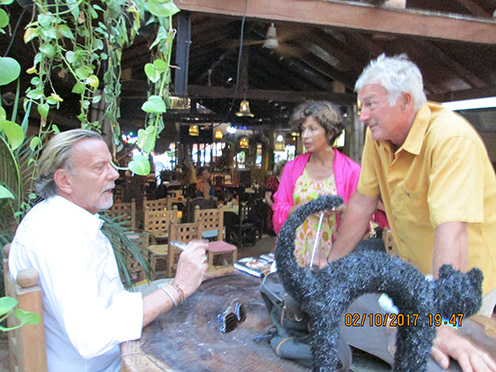 Last Friday evening, Browne spoke to an intimate audience here in La Manzanilla about his life, hiding nothing.  He spoke openly about his loves, addictions, personal loss, and his frustration in a justice system that lets the most vulnerable fall through the cracks.  He recounted tales of his college days in a hippie band, when he was given the thankless task of babysitting two of the most famous “rock gods” of the time (Jimi Hendrix and Jim Morrison), to becoming a “nanny” to children in the French Embassy in Washington D.C.  It was through this connection that Browne interacted with many of Nixon’s government officials.  To see the corruption of the government first hand only made Browne more determined to fight injustice.

From Vietnam protestor, to civil rights and prison reform activist, Browne has always accepted the challenge.   His career has included some of the most prominent criminal cases of our time:  Bundy, Colton Harris Moore (the Barefoot Bandit), and most recently Sgt. Robert Bales, who in Browne’s opinion is a victim of a needless war and uncaring government agencies.

Browne answered questions from the audience after his talk, most of which were centered around Ted Bundy.   Browne admitted that his interactions with his client had changed one of his fundamental beliefs, that a person is not born evil.

I have just finished reading “The Devil’s Defender” and would highly recommend it.

Rehearsals are in full swing for this year’s production of “Sylvia,” a two-act play, written by A. R. Gruny.  Director/producer Arleen Pace gave me just a teaser to the plot.  Set in New York City, the main character is a dog named Sylvia, who “rescues” a man going through a mid-life crisis.  Arleen would give no more away from the story, but she did say that the audience would laugh, cry, and leave the theatre feeling good after the performance.   I will take Arleen at her word.  She has been in the theatre most of her life, acting, producing and directing both in the United States and in Mexico.  In the summer months, Arleen and her husband Jon live in Ajijic, where she is an active member of a theatre group.  Here in La Manzanilla, along with George Rachlin, she founded Bare Bones Theatre nine years ago, gathering together a stellar ensemble of actors. Each winter season she produces a show that is sold out in advance for both performances. 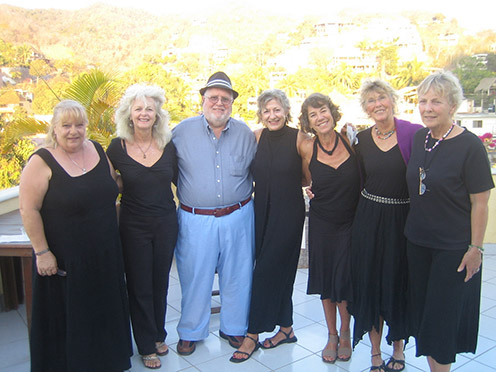 This year’s shows will be held on Sunday and Monday, February 26 and 27 at Los Cabañas Restaurant.  Ticket price remains at 100 pesos.  I would advise to get them early as I have no doubt this show will once again be a sellout.

Proceeds from the enactments are donated to various health organizations: the ambulance fund, the sewer project, a new defibrillator for the free clinic in town, and tuition for a young man studying to become a paramedic, just to name a few. 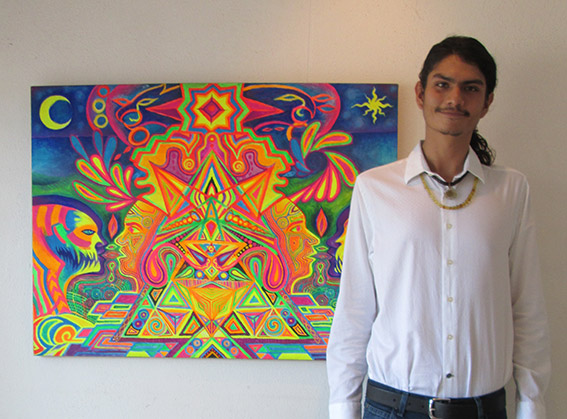 La Galeria de La Manzanilla has held their third in a series of seasonal Meet the Artist receptions.  The latest one featured Leonardo Gonzalez Galindo, the son of Efren Gonzalez, who is a local favourite both here and in the Ajijic/Lake Chapala region.

Leonardo has inherited the family gift and has created his own range of art.  He studied oil techniques at independent workshops with instructors from various countries.  He has also taught classes in different states in the United States and is active in artistic collectives in Guadalajara and Ajijic.

Leonardo’s works have been exhibited widely throughout Mexico, Colombia and Guatemala.  His work is fluid and is inspired by the constant change of surroundings and life lessons.  He has recently been working with fluorescent paints with breathtaking results. 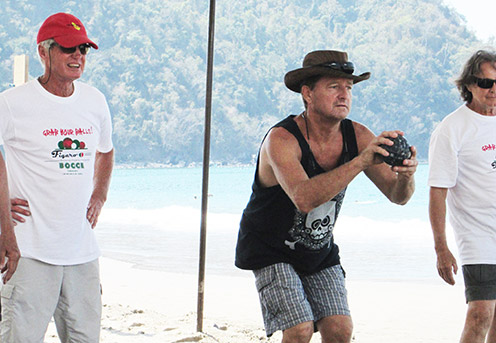 The third annual bocce ball tournament sponsored by Figaro’s Restaurant was another enjoyable success.  Forty-four people signed up to participate in this up-and-coming beach activity.

Competition was fierce as the teams faced off against one another.  Superstitions are on display in this sport, as in many others.  One player kissed his balls before launching them in the pit.   Seemed to work more often than not for him.

The winners of the event were Leonardo Meehan and his partner Korey Ireland.  The winners received a grape plaque of the God Bacchus Dionysus, designed and crafted by artist Pino, the owner of Figaro’s Restaurant.   The tournament raised 14,083 pesos, all of which will be donated back to the La Manzanilla community.

La Catalina Foundation Annual Night Under the Stars. Saturday, February 18, starting 6 p.m. in La Manzanilla’s main plaza.  An evening of food, live entertainment and a silent auction.  Proceeds from the event will help the foundation continue its Student Scholarship program, along with its English and Youth Art program.