Bare Bones Readers Theatre’s premier of “Sylvia,” a two-act play written by A. R. Gruny and directed by La Manzanilla’s own Arleen Pace, was, in my opinion, the best night of entertainment held this season.

Set in New York City, “empty nester” Greg (Ralph Zimmerman), unhappy in a boring job plays hookey from work and ventures into Central Park.  While sitting on a bench, contemplating his life, an abandoned dog named Sylvia (Jose Ginger Rodgers) jumps into his lap and a bond is instantly created.   However, when Greg brings Slyvia back to his apartment, his wife Kate (Jeanne Crosby), who has begun a new chapter in her life since the children have grown, is not impressed!  A dog is not in her life plan at all.  Sylvia becomes “the other woman” in their marriage.

The advice given to the couple from well-meaning acquaintances had the audience reeling with laughter.  There was dog park buddy Tom (George Rachlin), who had read every self-help manuscript ever written, sympathy from a hoity-toity associate Phyllis (Valerie Denford), who abhors dogs, and a session with psychiatrist Leslie (Jo Anna Hope), who needed to see her shrink after dealing with this love triangle.

Sylvia had a lot to say as well, especially to a cat on the street.  What she threatened to do to this creature had me laughing so hard I had tears running down my legs.  It also made me want to wash out my dog’s mouth with soap when I got home.   It was a stellar performance.

Cast and crew received a well-deserved and thunderous standing ovation.   Proceeds from the two performances will, as always, be channeled back into the health care organizations in our community.  Thank you Bare Bones for your continued dedication to the arts, entertainment, and wellbeing of La Manzanilla.

Staying with an animal theme here, but this is wonderful news for all pet and livestock owners in the town. Since losing our local practioner two years ago, many owners found it difficult to transport to the vets in Melaqaue and Barra de Navidad.

In early February, a young man named Abraham Gonzalez, a newly graduated veterinarian, returned to his home town of La Manzanilla to set up his practice.  Gonzalez is trained in the health care of livestock, cattle being his specialty, as well as the well-being of our smaller fur babies. Proficient in surgeries, such as spay and neutering, it will take him some time to set up a proper clinic where these can be done.

Gonzalez is determined to remain in his hometown and be of service to all residents.  He is working from his home at the moment, located near the main entrance to town on Calle Jesus Velez 25. But this thoughtful young man is willing to make house calls.

A call to his cell phone, 315-108-5840, is all that is required to set up an appointment and he will be at your door on time.  He also offers dog grooming services, pickup and delivery of your pet included.

The third and final event for this season’s Spoken Word Charity Season drew a packed house last Monday night at Casa Luz. The audience was enthralled by the presentations of Denise Brown, Anne Wheeler, Linda Crosby and Alice Walker. A total of 5,250 pesos (after expenses) was raised during this trilogy of expositions, all of which were donated back into the community.

A local resident who had been badly injured in an accident received 2,100 pesos to help sustain his family until he is able to go back to work.   Another 2,100 was donated to the Dave Sullins Memorial Art Fund to aid the various student art projects, and the balance was donated to the town’s Sanitation System project.

A joint donation of 2,100 pesos was donated by speakers Brown and Crosby to the Eduardo Morales Ochoa Medical Fund. Eduardo is an enchanting five-year-old who was born without a femur in his right leg.  He needs to make a yearly trip to Mexico City’s Shriners Hospital to receive a new prosthetic limb, as well as several trips a year to Guadalajara for physiotherapy.  This donation will go a long way in easing the financial burden his family faces. 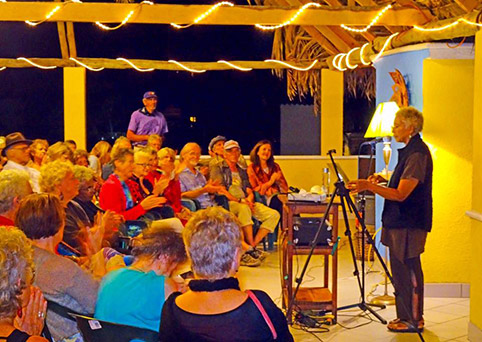 Early Saturday evening, the art students held their first exhibition on the grounds of the La Catalina Foundation School.  Each young artist proudly and eagerly stood by their exhibits.  Guests to the event were impressed by the creativity and originality of these budding artists. There were a variety of watercolor paintings, clay masks, paper mache sculptures and items such as lamps made from natural sources to view and purchase. Refreshments were available to munch on while decisions were being made.

The expo raised 15,400 pesos – 70 percent (10,780 pesos) going directly to the student artists. After expenses the rest was donated back into the Dave Sullins Memorial Art Fund and the La Catalina Foundation Student Art Fund. 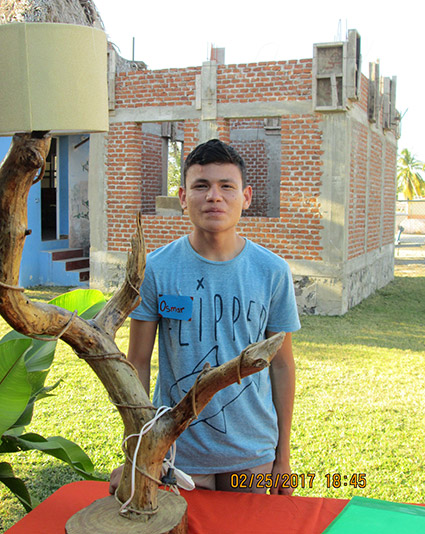 On February 13, readers of the La Manzanilla Message Board were shocked and dismayed by the announcement posted by the Art Walk Committee. The 9th Art Walk that was held on January 29 was the finest one held to date, but would unfortunately it would be the last.

At the time of that announcement there was no explanation given as to why. The news triggered a barrage of questions, speculations and rumors. A meeting was subsequently held by the members of the committee to explain the reasoning behind their decision. They explained it is partly due to some small legal issues to work out with our local Delagacion, and also because of “burn out” by several committee members.

The Art Walk, held each year from December to February, is a huge undertaking to create, and sadly over the years volunteers have dwindled down. The meeting was also a call out to participants for ideas and feedback on how to preserve this event which is such a benefit to not only the various art programs but to the entire community.

A small survey done onsite showed that there is overwhelming interest in keeping it going.  Since time is running out for meetings this season with many of the members heading back north soon, it was decided to work together via emails and our town’s message board. I truly hope that we can get together on this issue and work it out, because if not it will be the children of the town that will lose out.