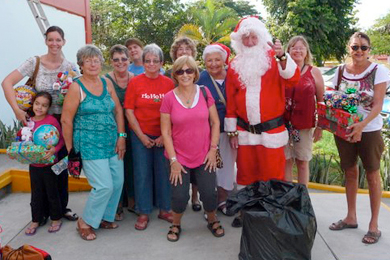 A reminder to returning snowbirds is that the Instituto Nacional de Migracion (INM) office has moved out of Bucerias and is now in Nuevo Vallarta.

The office is located in the Business Center on Paseo de los Cocoteros, the main north/south street in Nuevo Vallarta. It is not far from Paradise Village Mall, in the same building as San Javier Hospital. The hours are 9 a.m. to 1 p.m., Monday through Friday. There are free public parking lots in front and back of the building. Enter through the building’s main entrance and go up to the first floor.

On the same floor as INM, around the corner, there is an office where you can have copies and visa photos made. A bank is located in the same business center.

A small charitable act by two Bucerias residents has evolved over the years.

Ron and Arlene Tackett started driving around the poorer neighborhoods of Bucerias 19 years ago in their Christmas-lighted jeep, throwing candy to children.

The Tacketts would eventually become known as Mr. and Mrs. Santa, with Ron filling out his red and white suit perfectly and the event becoming known as Bucerias Christmas for Children.

On December 24, up to 1,200 children, some accompanied by parents or grandparents, will stand in line for a toy, a bag of candy and a chance to meet Santa as they exit the fenced courtyard of the small Catholic church on the arroyo.

The whole process began this year on December 10, with Toy Wrapping Day at the Tackett’s house.

“We actually work one year in advance, as it is impossible to raise money, purchase toys, wrap and organize everybody in a week or two,” Arlene says.

About 30 volunteers arrived at 11 a.m. to sort toys, which were purchased or donated throughout the past year, into gender and age-appropriate boxes and wrap them in Christmas paper. They finished the job at 2 p.m.

“1,800 bags, 400 more than last year, were filled with candy which was donated for the big event,” notes Arlene. “There was enough candy donated this year that we were able to give some of it to the Bucerias Bilingual Community Center for their posada.”

It costs approximately 40,000 pesos a year to buy the toys, wrapping paper, and wrapping supplies. All but 1,000 pesos was collected at this year’s fundraiser held on December 13.

Arlene says elves who want to help load and unload presents and candy are asked to be at their house by 3 p.m. If they would rather go directly to the church, Santa’s helpers should be there by 3:45. Santa arrives at 4 p.m.

As many as 250 moms and grandmothers will be there, Arlene says, and they will receive a donated bag of soaps and shampoos.

The Tacketts say they want to hand the reins to others next year because they are “ready to retire.”

“We really hope that someone will want to step up and take over, because we would hate to see it end. The children really look forward to receiving a gift as well as seeing Santa. The elves really like helping out and say it is the highlight of their year.” says Arlene.

“We want to have someone (or more than one family) work with us next year. We would pass on the Santa suit, tape dispensers and any information that would help them.  I would also go to all the businesses with them next year to get donations.”

“Our helpful friend, Wendy, told us that if new people want her to help, she will be glad to continue on in any capacity for years to come.

“We plan to be strictly in the background as soon as possible.”

Contact the Ron and Arlene Tackett at This email address is being protected from spambots. You need JavaScript enabled to view it. or by calling (329) 298-1729.

The art auction that was scheduled to take place Saturday, December 15 has been rescheduled for Saturday, January 19.  The hosts of this event are sorry they had to change the date, but  hope that people will continue bringing in items for the event. They are saying they have some interesting art pieces and antiques already.

Up-and-coming artists, or even experienced but thrifty ones, can now show their work at Floydilou Kerr’s gallery at Lazaro Cardenas 60-A in Bucerias.

“Every three weeks the gallery holds an open art exhibit on on Thursday nights. Artists can submit one piece of art for showing at a cost of 150 pesos or three pieces for 250 pesos,” she explains.

“Their work can be seen by the many people who stroll along several blocks of Av. Lazaro Cardenas, during the weekly Bucerias Artwalk, from 7 to 9 p.m.,” she says.

A 25-percent commission is taken upon sale of the artist’s piece, Kerr says.

Upstairs from the gallery is a drop-in studio with daily, weekly and monthly rates, catering to travelers, locals and snowbirds not wanting to invest a large commercial expense for a long period of time. This shared space is large and open with good light.

Kerr says art supplies will be on hand and art lessons will be available.

The gallery plans to offer a special six-month rate, which should be particularly attractive to high-season residents.

For more information, contact This email address is being protected from spambots. You need JavaScript enabled to view it..

Every year the Beta Sigma Phi service sorority holds a Christmas boutique to raise money for their various charitable projects. One item at the boutique is a Christmas tree which contains paper stars with pictures of each student at the special needs school (CAM 12) in Bucerias. This year, two families who saw the tree took a special interest in the kids. In addition to buying stars from the tree, one couple returned to the boutique a little later and made a very generous cash donation. Their wish was for Beta Sigma Phi to buy a present for each child at the school and also to help the school with their Christmas posada. With very short notice, the ladies of Beta Sigma Phi got a wish list from each child and bought a gift for every one of them. On Monday, December 17, Mr. and Mrs. Santa Claus (also known as Gordon and Ann Weiland of British Columbia, Canada and Bucerias) and members of Beta Sigma Phi attended the posada and distributed the gifts. The generous benefactor asked only for pictures of the kids in return for their donation.

Another family, with two children of their own, bought stars and asked if they could buy gifts for those kids as well. They attended the party and enjoyed having fun with the students.