Sailing, swimming, surfing and beach volleyball are probably what come to mind when people think of sports in Bucerias.

But a growing number of expat residents and visitors are discovering the large sports complex located just a few blocks east of Highway 200, between the arroyo and Av. Estaciones, for non-water and beach-related activities.

The sports complex has long been used by the local community for soccer (there are three fields), basketball and volleyball. 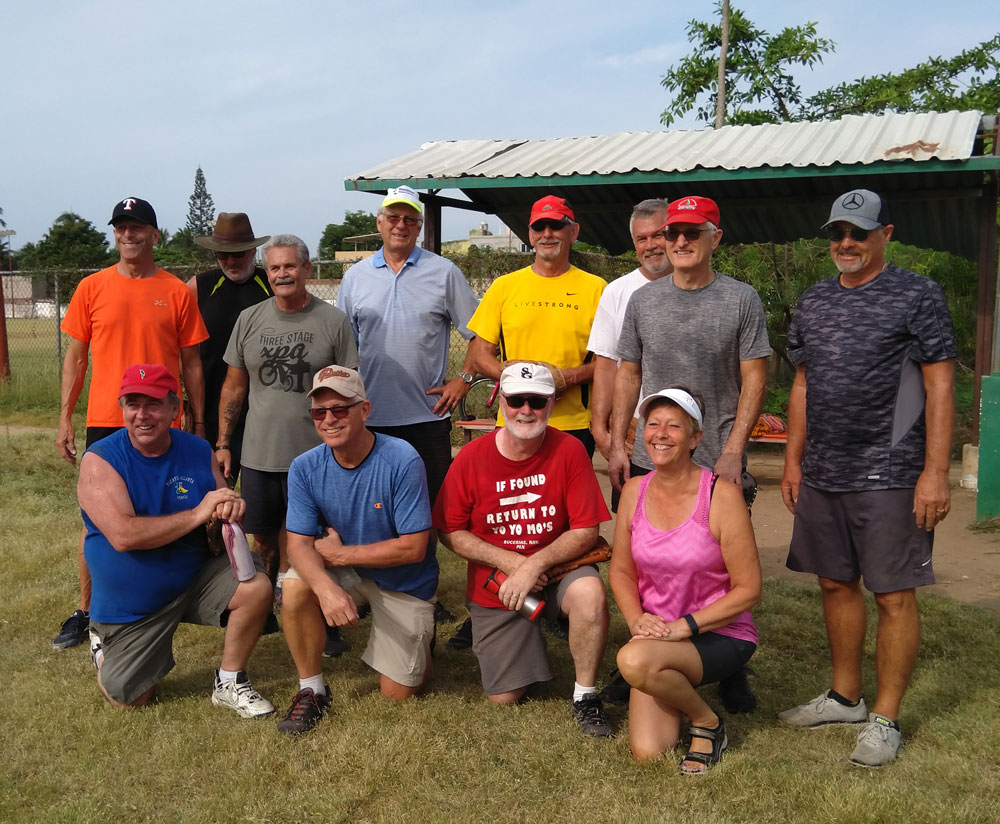 In the past few years, the regulation-size baseball field has gotten a lot more use.

Don Schaufele and Vito Mirlocca head up the informal soft-pitch softball league that uses the facility.

“It’s not really a league,” said Schaufele. “Anyone who shows up can play anytime we’re out here.”

During the high season months, games are held at 9 a.m. on Tuesday and Saturday mornings. The group is divided into two teams. Most equipment is provided, although many players bring their own gloves.

“We have rules,” said Mirlocca. “Everyone who wants to play can, everyone bats every inning, no outs are counted, and we try not to get hurt.

“People come with different abilities and we work around it, pinch runners are used often. We all do what we can,” said Mirlocca with a smile.

Plenty of camaraderie has come from this group, which was originally formed as the Guys and Dolls softball by Barry Munro about seven years ago. Members plan lunches together after games and have held other social events.

Anyone wanting to play can just show up any Tuesday or Saturday morning.

The very popular game of pickleball has found a home at the sports complex as well.

Said Dennis Mazzei, one of the organizers of the group: “Five years ago, several friends got together to see where we could locate a pickleball court. The first year we started out with two courts and 20 players.”

He continued: “The Bucerias pickleball club now has a membership fee. We have 100 members and members can play any day. Drop-ins can sometimes be accommodated but there’s no guarantee. Last season, there were over 350 individuals involved in the games. Right now, if a player wants to come as a drop in, they should arrive before 8 a.m. on Monday, Wednesday or Friday. During the high season months, games are held six mornings a week at two skill levels. 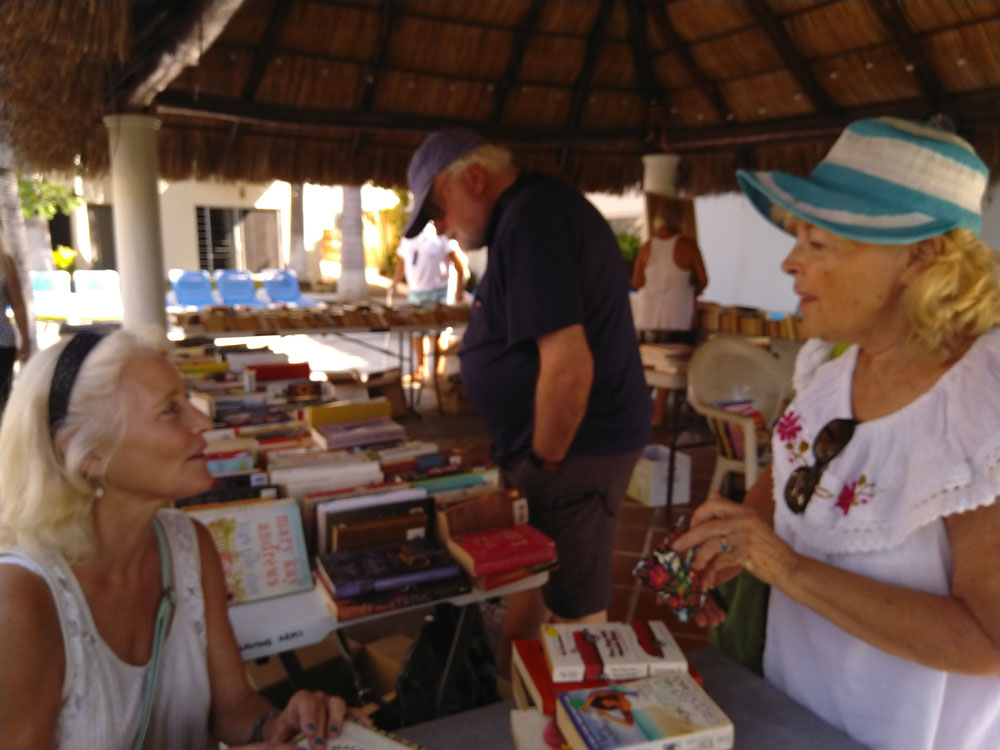 Fees from membership and drop-ins cover the cost of nets and balls, which the club provides, and maintenance and improvements to the pickleball courts. Players provide their own paddles.

• There were 246 cats and dogs brought to the Abuelos Senior Center free spay/neuter clinic sponsored by the Paws and Claws group, held November 20-24.

That means 123 female dogs, 27 male dogs, 75 female cats and 21 male cats will no longer contribute to the stray animal population of Bucerias.

“I’ve really noticed the decrease in numbers of stray and poorly cared for animals in the last couple of years,” commented local business owner Colin Maruk. “The center of Bucerias used to have a big problem with loose dogs and their droppings and each year it has been less noticeable.”

Paws and Claws spent 70,000 pesos on the clinic (less than 300 pesos per animal) and now intends to get to work refilling their coffers for future clinics

• An upcoming fundraising and fun event is the popular Photos with Santa, set for Sunday, December 15 at La Postal Restaurant on Lazaro Cardenas and Morelos, beginning at 3 p.m.

Santa, of course, will be there, ready to have photos taken with pets, kids and families. Keeping in the Christmas spirit, there will be a bake sale of home-made goodies. A raffle, 50-50 drawing and happy hour specials will round out the festivities. 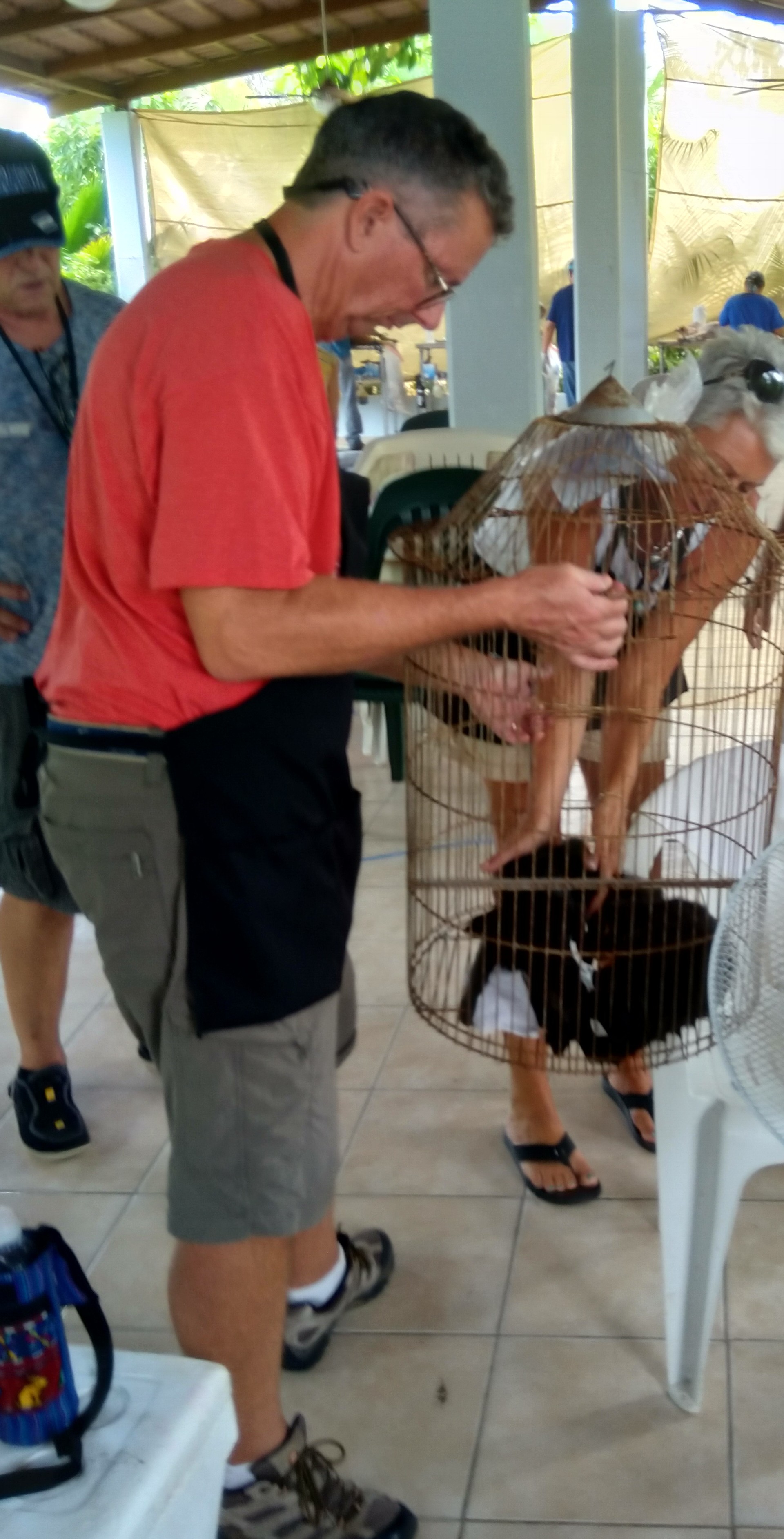 • Next up is Wine Survivor. Tickets are now on sale for the popular “reverse” raffle. The event is January 14 at El Chivero restaurant at the beach in Bucerias centro.

Wine Survivor is a reverse-draw raffle, because the last person standing wins the grand prize.

There will be 130 tickets sold, costing 300 pesos each. The price includes a 200-peso value bottle of wine that will be in the raffle.

As numbers are drawn from the hopper, that ticket is out, but participants can buy back in up to two times for a small cost. The action is fast and fun as people hope to be one of the five winners.

The top prize wins 40 percent of the bottles of wine. If all 130 tickets are sold, that adds up to 52 bottles.

Recycling bins installed by the Bucerias Recyclers (Recicladores de Bucerias), associated with Amigos de Bucerias, have been a common sight in the town for more than a dozen years.

Recycling first started in Bucerias in October 2006 under the leadership of Barry Munro and Jerry Knapp, members of Amigos de Bucerias.

In the first five years they ran this program, the project collected over 162 tons of plastic bottles.

Neil Lamb has been the head of the recycling program since 2016, but recently resigned.

Recicladores de Bucerias has their “headquarters” for depositing the collected material, plastic bottles and aluminum cans on land owned by El Eden nursery owner David Velasco, who allows its use free of charge.

To make it easier to recruit volunteers to collect and sort the materials, and drivers with pickup trucks to pull the recycling trailer, Bucerias was divided into two collection zones on two days. Different drivers tow the trailer, each accompanied by two riders.

The collection process is simple. At each bin stop, the collectors place a large plastic trash bag over the basket to empty the contents, and then put the bag into the trailer.  At the recycling “depot,” the bags are unloaded and emptied into jumbo plastic bags, which are reused several times to save money.

“Some of the collection bins have grown legs over the years, which is really disheartening,” said Lamb. “Thankfully, people and businesses have donated to adopt bins to replace the missing ones.”

There are approximately 170 baskets located around Bucerias. Individuals or businesses can sponsor a basket for 300 pesos. Sponsorship includes a sign with either a business or person’s name, or their grandkids or family names.

For several years, profits from the recycling program have been dedicated to Amigos de Bucerias program to repair the city’s streetlights.

Finding people willing to donate their time and tow the collection trailer has always been the weak link in the program, said Lamb. Only a few volunteers offer themselves and their vehicles to make the twice weekly rounds of the town.

Bucerias resident Dick Pickup has driven his pickup truck every Monday for almost 52 weeks a year, for over 12 years. Skip Burden was the Thursday driver for years, but has returned to the United States. Taylor McFadden volunteers to drive his vehicle regularly on both Wednesdays and Thursdays, with the Thursday route now split into two days. The spare driver, Ross Cable, has filled in with his vehicle when he can.

Pickup recently sold his vehicle so the recyclers are in urgent need of additional volunteers who can donate their time and vehicles.

The idea was floated at an Amigos de Bucerias meeting last spring that recyclers should buy a truck to pull the trailer. The solution was complicated when it was determined that the civil association’s charter would have to be modified to allow for property ownership. The legal cost to amend the charter became an issue, because thousands of pesos would have to be spent on legal fees. A fundraising campaign was proposed, but that got put on hold, which led to Lamb’s resignation.

However, there is new hope after an anonymous donor offered to cover the legal costs. The recyclers are now looking to buy a late-model, four-cylinder, four-door pickup, either automatic or standard transmission, with AC.