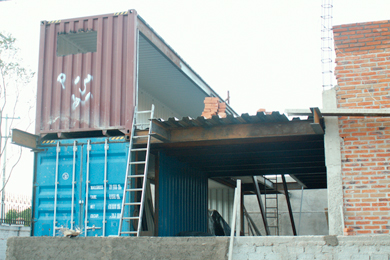 Gashaan has already built eight homes in Guadalajara using shipping containers as the base building block and has patented other designs, including a two-bed, two-bath apartment/home that he says would be “ideal for retirees looking to settle in the Lake Chapala area.”

Container architecture is nothing new – the first patent was filed in 1987 – and designers all around the world are doing amazing things with them, but the genre is still developing in Mexico.

“The idiosyncrasy of Mexico is that people believe buildings have to be constructed with specific materials, usually brick, because that’s the way it’s always been done,” Gashaan says.

The obvious recycling benefit of container architecture is just one of many, according to Gashaan. Strength, durability, availability and cost are others. “You can also build a home in half the time and move it around when you’ve finished.”

The secret is to think of a shipping container as more than just a box, says Gashaan. 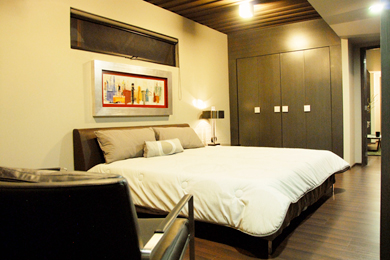 Containers can be creatively worked into home design and – as with a residence he recently finished in Ciudad Bugambilias – clever interior manipulation means that the steel structures can be invisible in the final article.

“The Mexican won’t live in a raw container, the European yes.  He’ll say I’m caring for the environment, great. He’ll furnish the container and may not even paint it.”

Gashaan adds that a few local clients have started to demand that the container be visible in the finished design. “They want to keep the container look, to show they are innovative and blend the industrial part with the style.”

After studying architecture and design in Guadalajara, Gashaan spent ten years experimenting with containers and becoming adept at working with the steel structures.  He says while the original containers may look small, he has developed a “secret technique” to “double their size.”

And because of the availability and modular form of shipping containers, projects can be as big or as small as a designer’s imagination.

Gashaan says he will soon start work on a seven-storey hotel in Manzanillo that uses 14 containers and a Presbyterian church on Guadalajara’s western beltway constructed from 40 containers. 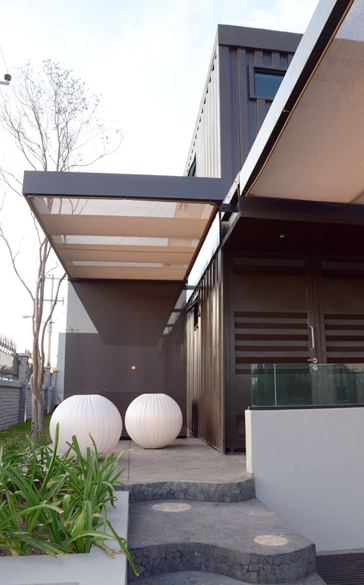 In a simpler, but no less creative vein, Gashaan has developed a “ready-to-go” patent for a restaurant/bar using just one container that comes fitted with a drinks bar, kitchen, bathroom, sound system and video connections.

“The beauty is that if the business doesn’t work out because of the location, as it often does with restaurants and bars, you can just move it somewhere else.  It’s just the kind of unit that would look great on the Malecon in Chapala or Ajijic.”

Although traditionally slow to adapt to new trends, the Mexican architectural community is coming round to container design, says Gashaan, who acknowledges that most of his clients are not short of a dollar or two. “I figure that if my work is accepted by those with money then it will be easier to move into the mass market in the future.”

Gashaan says using containers in popular housing projects is viable but it depends on the will of governments, who often fail to identify the bigger picture.

However, Gashaan says he will be able to sell his prefabricated, 90-square-meter apartment for around 1.2 million pesos. He says the living space will come with all the creature comforts and is “perfect” for a young or elderly couple. He plans to launch his patent soon by taking it on a “nationwide tour.”

What excites Gashaan so much about using containers as building material is their “anything is possible” attribute.

“Imagine if the government had built the Pan American Games Village in Guadalajara using containers and not seen it as a ‘business project.’  It would have solved a lot of their eventual problems.  They could have packed it up and moved it all to areas of the city where people are crying out for homes.”

Pointing out that Guadalajara is now one of the continent’s most cosmopolitan cities, Gashaan believes container architecture’s time is on the cusp of arrival.

“I reckon that even in two years’ time, we’ll be starting to see many plazas, fraccionmientos, bars in this city, all with container architecture. And in a decade, they will be everywhere.”

For more information on container architecture call Taufic Gashaan at (33) 3334-8487 or email This email address is being protected from spambots. You need JavaScript enabled to view it..