At first it seemed like butterflies might end up outnumbering human spectators at the recent Sunday concert celebrating International Jazz Day. 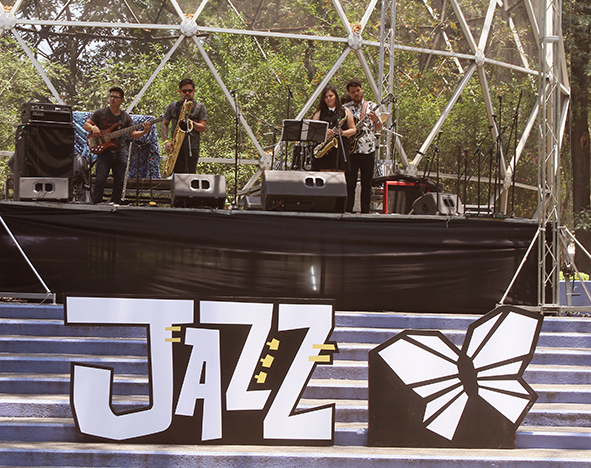 But it was only 2 p.m. The event, organized by the city and consisting of a single stage set up on a short, brood flight of steps below the giant spherical cage that is Parque Agua Azul’s butterfly conservatory, eventually drew a healthy crowd – by local jazz standards, at least.  That the four more conventional of the six groups making up the bill attracted the biggest crowds is to be expected; that the two most left-field, progressive groups managed to command and retain the sparser audience’s attention speaks well for Guadalajara’s jazz scene as a whole.

In 2011, April 30 was named International Jazz Day by UNESCO, a U.N. organization whose mission is the protection and preservation of cultural patrimony around the world.  According to Susana Chavez of the state’s Culture Ministry, UNESCO’s aim in doing so was to help “disseminate the music that helped stimulate the civil rights movement in the United States and that inspires cultural interchanges all over the world, exalting concepts such as equality, unity and peace.”

But what is jazz? Is there any one definition and if so, who gets to be its arbiter? Sara Valenzuela, a festival organizer and musician, seemed to think that jazz is, in part, best defined in terms of the way in which it becomes transformed by interaction with different cultural traditions.

“It’s important to celebrate this day, but through the local scene, giving space to bands that are making relevant, interesting music,” said Valenzuela.  She went on to describe the difficulty of picking six bands she and her fellow organizers felt represented the breadth of the scene in Guadalajara.  “It was hard to curate because there are a million bands out there, but it’s a meaningful, accurate portrait of what’s happening in Guadalajara right now.” 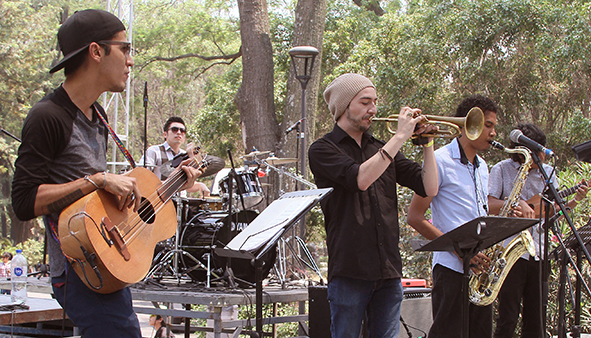 Asked to share his opinions about Guadalajara’s jazz scene versus Mexico City’s, Chen Quintero, saxophonist and leader of festival opener Cienfuegos, evinced a mixture self-effacement and sly defiance, a typical Second City attitude.  He had only just walked off the stage after a one-hour set, his eyes glowing with post-performance euphoria.

“We make new music. Mexico City players are technically better, but they don’t play new music.” Thoughtfully jangling the change in his pocket, Quintero added, “We tend to form bands.”

Jazz can be divided according to two approaches: one which consists mainly in constructing improvised variations upon a standard repertoire of songs – many of which come from the musical comedies of early-20th Century America – and one in which new music is composed (and improvised) by one or more members of a group.  Furthermore, there are bands formed in large part as a vehicle for a star soloist, and others which are cohesive units whose group dynamic is as important, if not more so, than any one of its constituent member’s sonic peacocking.  It was clear both from Quintero’s comments and from the music itself that Cienfuegos belongs to the camp that prizes collectivity and original music.

Toktli, the festival’s sophomore act, while just as collective-minded as its predecessor, is shot through with an entirely different genetic code, one informed by the complex but danceable rhythms of Son Jarocho, a folk music from the Mexican state of Veracruz. 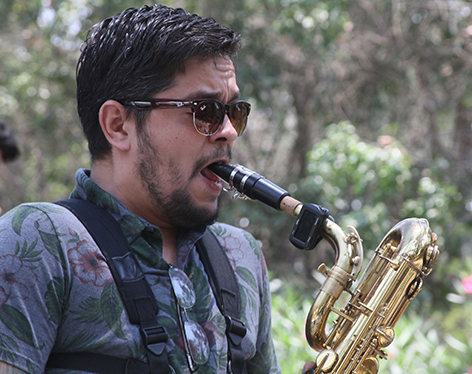 Son is our blues.” That is how Vico Diaz, bandleader and leona player for Toktli, summed up Son Jarocho’s contribution to his group’s sound. Not unlike the 12-bar blues in America, Son Jarocho provides a rhythmic and harmonic template upon which to spin any number of musical variations.

Diaz, when asked for his own thoughts on Guadalajara’s jazz scene versus that of its hulking rival to the southeast, opined that “the scene here is more fusion-oriented.”  That is, the musicians are not content to continue playing the same few hundred battered old hymns in the prayer book of jazz, attempting instead the creation of something new by the marrying of different forms. To this end, Toktli (“sprouted from the earth” in Nahuatl) features a less-typical instrumentation: in addition to the afore-mentioned leona, a bass guitar-like instrument with a deep, resonant sound, there is the jarana, a small stringed instrument that, in addition to sounding out chords, provides the infectious, heavily syncopated 6/8 rhythm characteristic of Son Jarocho.  Tenor sax, trumpet and drums combine with these two non-traditional (in a jazz context) traditional instruments for a sound with few if any peers.

The rest of Sunday’s entertainment was provided by a roster of bands staffed by a lot of very capable musicians playing in genres as diverse as big band jazz, latin, funk and soul jazz.  However, Cienfuegos and Totlki, two scrappy underdogs working in an already marginalized genre, stood out from the pack with their capacity for surprise and their irreverence.  If UNESCO’s well-meaning preservation efforts are to have any meaning in the context of jazz, a protean art form which rejects efforts at categorization, then these two ensembles should continue to find solid footing on jazz’s ever-shifting landscape.

For more information regarding the music of Cienfuegos and Totlki, visit their band pages on Facebook.