Ukuleles.  More and more, it seems like they’re here to stay.  By “here,” I mean the United States, Canada, Japan, and everywhere else outside of Hawaii where the little instrument has lodged itself deep within its host body, impossible to safely extract. 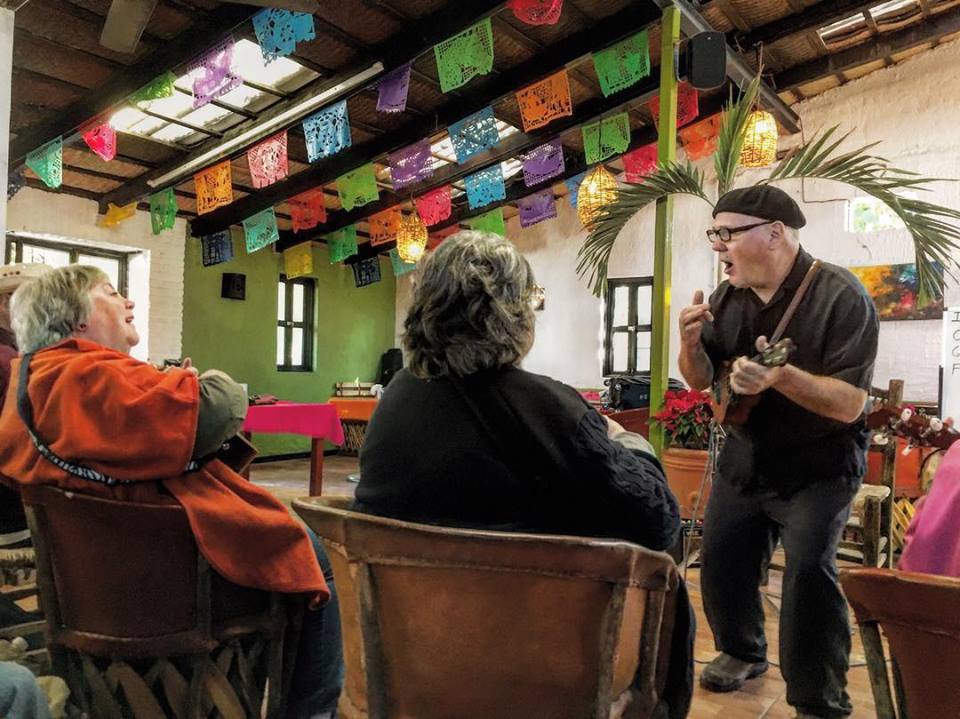 It wouldn’t be an intellectual leap to chalk that tenacity up to the instrument’s association with fellowship and bonhomie, something for which people of European descent always seem to be thirsting.  And those basking in the warm glow of life’s sunset seem particularly susceptible to its promise of shared experience.

“Here” is also the tranquil lakeside town of Ajijic, where the appearance four years ago of a ukulele club on its cultural landscape is as natural and inevitable as finding morels mushrooms in the damp, valdivian forests of the Pacific Northwest.

Club Ukulele de Laguna started in 2013 as a casual meeting of friends on the porch of one of the club’s founders, Sheila Ruof, who I found sitting on a bench strumming her ukulele by the town’s idyllic, sun-soaked malecon one Saturday afternoon.  She was taking a break from tirelessly coordinating her club’s annual blowout, the Ajijic Ukulele Retreat, which reels in ukulele teachers from Taiwan to Portland for a three-day flurry of masterclasses in right and lefthand techniques, lessons in music theory and rhythm, ear-training, and many other musical disciplines neophytes may find useful before accompanying their own, a friend’s, or a whole group’s rendition of “Somewhere Over the Rainbow” or “God Save the Queen.”

A compact woman draped in a loose turquoise shall, Ruof has the mien of a hip, laid-back mother superior.  Insisting firmly the article not be about her, the Pennsylvania native and former “suit,” as she put it, was nevertheless a generous fount of information detailing the club’s origins and current activities.

“Four years ago, a Canadian snowbird here introduced me to the ukulele,” said Ruof. “Soon I had a handful of friends playing on my porch.  That handful grew very rapidly.  We had a dozen people and we needed to find a bigger space.”

Ruof and her friends, including co-founder Judy King, found a home in Maria Isabel Restaurant, the sprawling lakeside property with roomy back and front patios that is often referred to as the “Old Posada,” one of Ajijic’s first eateries.

In the years since the club’s founding, Club Ukulele de Laguna’s membership has grown considerably. During the winter months, when retired folk flock to Ajijic, enrollment mushrooms to around 50 people. 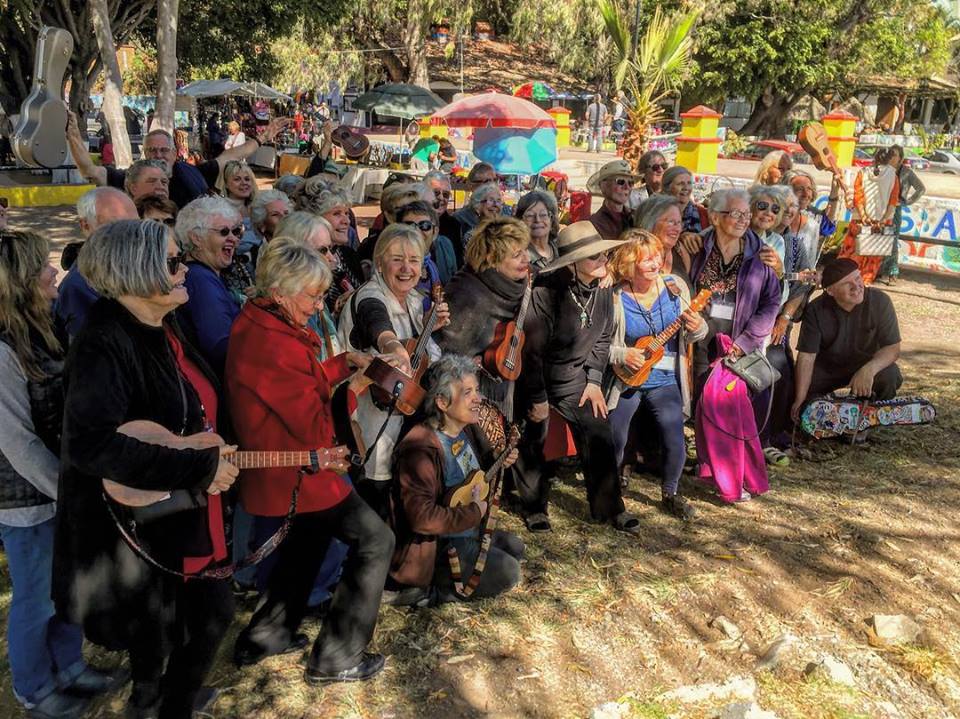 And increased membership has led to improvements in the retreat’s offerings.  According to Ruof, this year’s invitees represent a significant upgrade in terms of both the teachers’ profiles and the breadth of their geographic dispersal.  They include Kemo Hussey, who, in the words of club founder King, is considered the “Tony Bennet of the ukulele,” and the man Sheila Ruof says is responsible for the instrument’s popularity in China, David Chen.

One remarkable thing about the retreat is its pedagogical variety, illustrated by the contrasting but complimentary approaches of Hussey and Portland resident Jim D’ville.  While the predominantly female and over-50 attendees sat earnest, credulous and attentive with their matchbox-sized musical devices hugged close to the chest, the two men held two distinct kinds of court during their respective classes.

Hussey, hailing from Hawaii and exuding an effortless, Zen-like placidity, talked in a barely audible whisper beneath a giant arcing tree in the back patio.  His plangent discourse, while difficult to understand, melded beautifully with chirping birds, wind whispering in the bows of trees, clinking silverware, murmured Spanish, and the occasional yap of a street dog.

Fortunately, Hussey’s soothing vocalizations were aided by gestures to a white board to his left, on which was written a very handy Solfege diagram (do, re, mi, fa, sol, la, ti), a time honored means by which to train a beginning musician’s ear.

Completing the pedagogical picture was Suzanna Sandke, landing somewhere between Gallagher and Jim Gaffigan – Jerry Seinfeld, perhaps, but if said master of observational humor was a female “ex-hippie” (as she called herself) from Burbank, California clad in flowing fabrics.  She proved, among all those interviewed for this article, the most valuable (and voluble) repository of modern ukulele history. 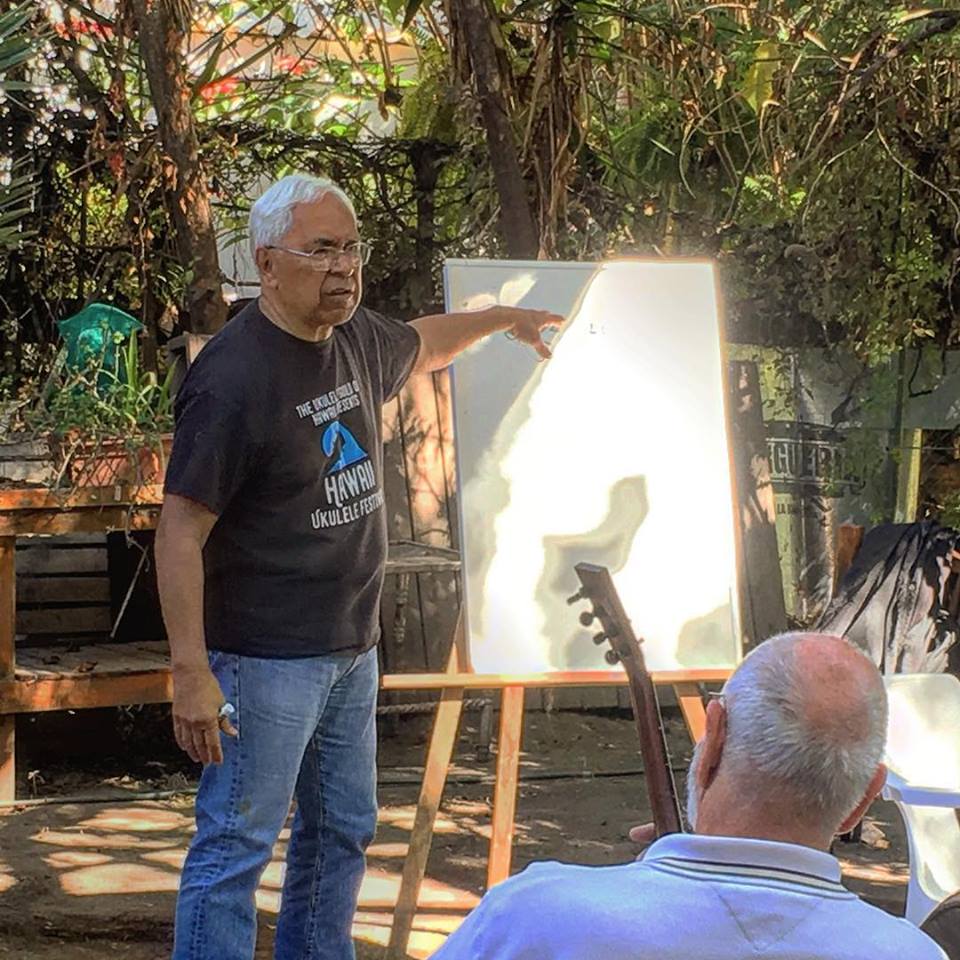 Sandke traces the moment when the ukulele entered into the consciousness of Westerners back to the early 20th Century, specifically to the Seattle World’s Fair of 1917-18, during which Hawaiian musicians were prominently featured, to much acclaim among flappers and the like.

“And then, of course, in the 1950s Arthur Godfrey came back again,” said Sandke, moving on the ukulele’s second spike in notoriety.

Afraid to stop her lecture’s momentum, I refrained from asking who Arthur Godfrey was as she jumped to the early 2000s, when the full invasion of the internet into people’s lives made picking up the ukulele a much simpler matter, in addition to facilitating the face-to-face interaction of teachers and students from around the world. (Godfrey, by the way, was a mid-century U.S. television personality who helped touch off the ukulele craze of that era.)

One element of the Ajijic Ukuleles Club its members kept emphasizing was its educational wing.  Known as the Academia Ukulele de la Ribera, it came about in 2015, two years after the club’s inception.  Its student body fluctuates between 30 and 40 students, ages 7-18.  The program is funded in part by ukulele rentals to adult club members who are still testing the waters, unsure of the wisdom of an outright purchase.

Because it turns out that ukuleles, for their toy-like size, are very expensive, something Kevin Beddoe, co-owner of San Diego-based Canard Ukes, is well aware of.  His products, made by partner and main luthier John Canard, go for an average of US$3,200 (they start at about $US1,750).

Despite their steep cost, Beddoe reports vigorous sales in Ajijic and other Chapala towns.

“We sell more Canards in this region than anywhere in the world,” said Beddoe, a tall man with the low key, sedate charisma and even-toned speech patterns of a Socal businessman who carves gleaming barrels on his surfboard in his free time.  He and his partner sell their premium product all over the world, from New Zealand to Canada, Japan to Western Europe.

Not to say the value placed on a well-made ukulele is exorbitant, necessarily, but what seems to get people in Ajijic investing in them is that ineffable, irresistible quality of fellowship that it promises, as well as its relative simplicity and ease of use.

“It’s the communal aspect,” said Ruof.  “We tend to sing old favorites and rock ’n roll songs, things that everybody knows. We do it together.”

Those who are writhing in regret at having missed the opportunity to learn at the feet of ukulele giants can take comfort in the fact that, according to King, both Hussey and Chen plan to return for next year’s retreat, and Sanke and D’ville are eyeing rentals in town.