Residing in an area of Guadalajara that is full of amazing restaurants of all price ranges, I still like to find a good, new one (and hope it doesn’t go out of business with all the competition). 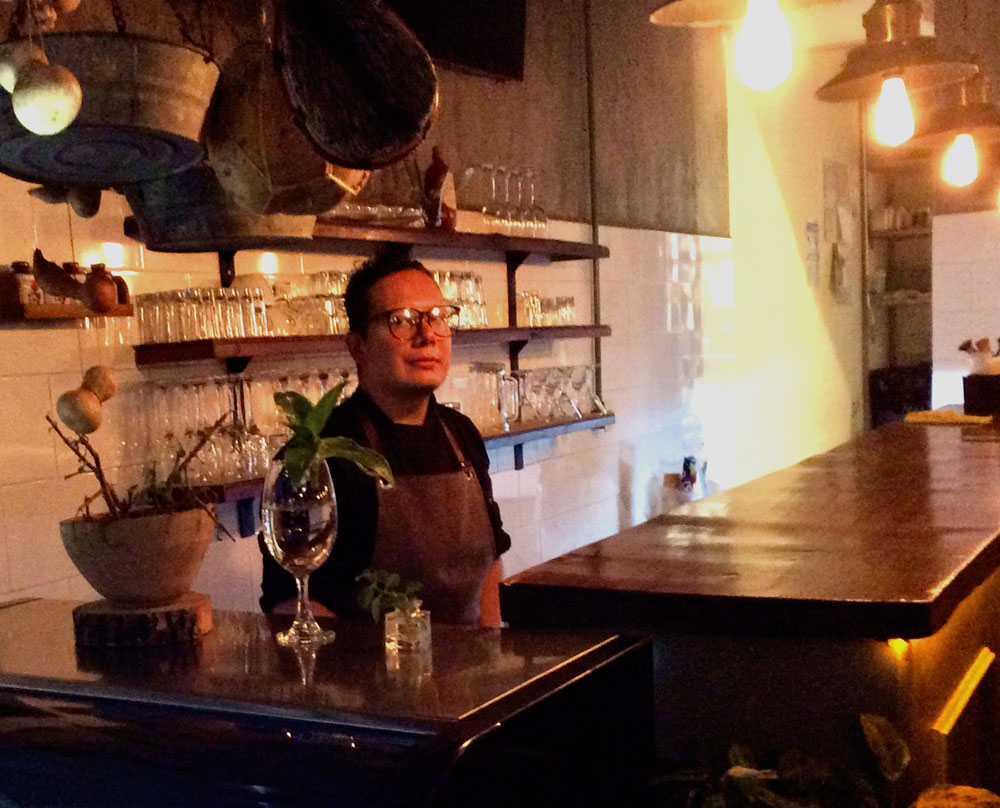 A friend discovered Ronda Cocina Española, and promptly came down with dengue half an hour after we decided to meet there later that afternoon (see story page 1). The friend thankfully recovered after just a few days, but wasn’t up to going out quite yet, so I made my way to Ronda alone, and was glad to find this small restaurant (12 tables) on a quiet, leafy street across from a tony, new apartment building just west of Chapultepec, where high rises are sprouting like mushrooms on a spring day, as people from Michigan like to say.

As is my custom, I arrived well after the Mexican dinner hour, so I had my pick of tables at Ronda and sat in its small back patio, which was so very tranquil, I could have meditated there. The menu, only the front and back of one sheet, is nevertheless ample. (Ronda also has a good-looking list of wine by the glass and bottle.) Since my current dining preference is pescatarian, I was going to get the Atun Pinciano for 160 pesos or Salmon en Salsa de Eneldo (dill) for 225 pesos.

But instead, the Paella Ituarte (Mediterranean style), priced at 140 pesos for a half kilo, caught my eye, and so I succumbed to the promise of saffron rice with shrimp, clams and chicken along with verboten spine tinglers such as chorizo español and jamon serrano. To assuage my guilt over the chorizo, I ordered an appetizer called Samfaina (65 pesos), a dish of mezquite-grilled eggplant, tomato, onion and sweet red peppers topped with queso de oveja or sheep’s milk cheese. 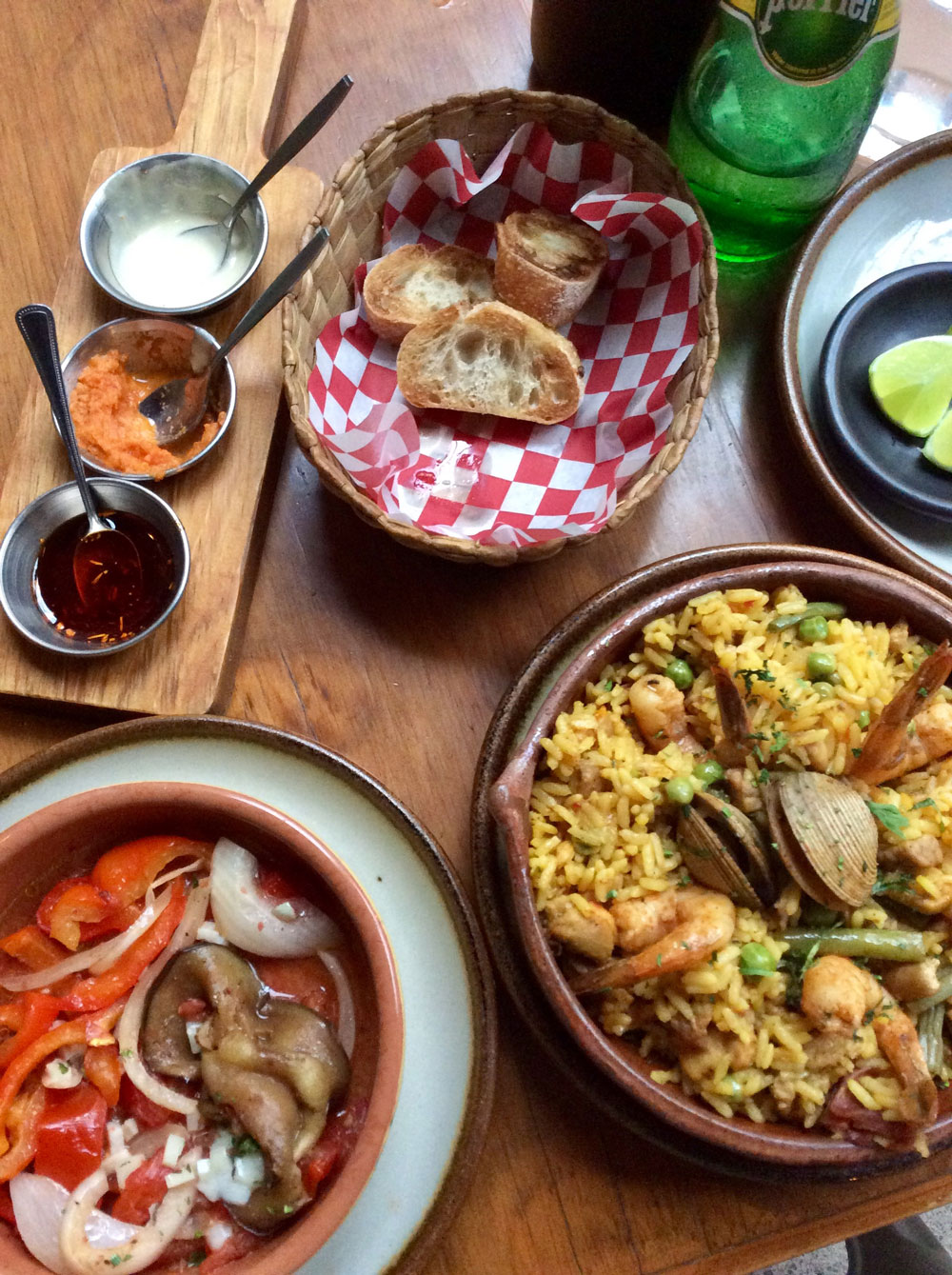 The samfaina was served promptly, nestled in a small earthenware dish—a nice, understated offering with a slight sweetness that could have been from caramelization of the vegetables. Alongside it were toasted bread rounds and a little board of three dips. Warned by the waiter that the oily chile dip was a bit picante, I sampled only two drops and was glad I restrained myself. But I loaded on the other two — the orange-colored romesco and the creamy white alioli, probably made with mayonnaise—and became an instant fan. In fact, the waiter brought me an extra board of dips and basket of toasted bread without being asked, possibly because he saw me scribbling and knew which way the wind was blowing. I could have made an economical meal out of only the samfaina and dips, but …

When the paella arrived in 10 or 15 minutes, heaped in its little earthen dish, crowned with four shrimp and two clams, and with enticing morsels such as peas and green beans peeking out from the golden rice, it was nice and hot. I once had paella in Marbella, Spain—46 years ago—and can confidently say that Ronda’s tastes exactly the same. Just kidding.

In any case, it was very good and once it cooled a bit, I could better detect its subtle but pleasing flavors, probably from the chorizo and jamon, since the dish’s principal spice, saffron, mostly gives color (along with some claimed health benefits) and does not have a lip-smacking flavor.

In fact, the seafood was so predominant in Ronda’s paella, and the amounts of controlled substances such as chorizo and jamon so negligible, as to pretty much cancel out my earlier guilt. This paella is, in fact, a great way to satisfy a chorizo jones without much damage to the mitochondria. (Okay, I am not sure what specific damage the sodium nitrite and nitrate found in cured meat actually does, although international health bodies such as the WHO have been issuing warnings about the carcinogenic properties of these chemicals for decades.)

After feasting on the samfaina, paella, dips and bread, I still had a yearning for dessert, even though—you guessed it—dessert is not high on my personal list of healthy foods. The question was: Was I going to go all out and have Xurros (in other words, churros)? At that moment, however, I was less transfixed by the sinfulness of churros than by the question of whether they are Mexican or Spanish. I had always thought they were Mexican, to be dipped in that classic, Mexican drink, hot chocolate. But, Wikipedia has woken me up to the reality that churros are probably not only Spanish in origin but, going even farther back, Chinese!

Well, eating Chinese at a Spanish restaurant in Guadalajara was going too far, so I opted for the other dessert at Ronda—Crema Catalana (52 pesos)—which at least kept things on the Iberian peninsula.

The waiter kindly asked the chef, Daniel, to keep the oven-glazed sugar topping on this flan-like dish to a minimum, so Crema Catalana, crowned with three blueberries and a baked orange slice, was a creamy, warm-cool, barely sweet, happy ending to the meal.