Lee Hopper began visiting his father at Lake Chapala in the 1960s. Now in his sixties, the bilingual Mexican-American has returned to make the area his home and, he says, help make a difference.

In early March Hopper came up with an idea to help youngsters learn the old ways while getting different generations of families to socialize at the plaza.

Capirotada is loosely described as Mexican bread pudding, although the similarities end with the bread and the raisins. There are as many variations of capirotada as there are cooks making it. 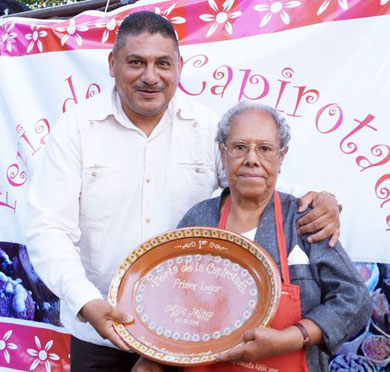 The local dessert is a dish, often served on Fridays during Lent. According to a local friend, the basic ingredients symbolize the passion of Christ. The bread represents the body of Christ, the syrup is his blood, the raisins are the nails of the cross, the whole cinnamon sticks are the wood of the cross and the melted cheese is the shroud.

With or without symbols, on Sunday 25 local cooks brought pans and cauldrons of their favorite versions of capirotada to the plaza for judging. All were hoping to win some of the great prizes on offer, including meals in local restaurants, aprons, bottles of tequila, hand-painted ceramic platters, movie tickets and, of course, bragging  rights. 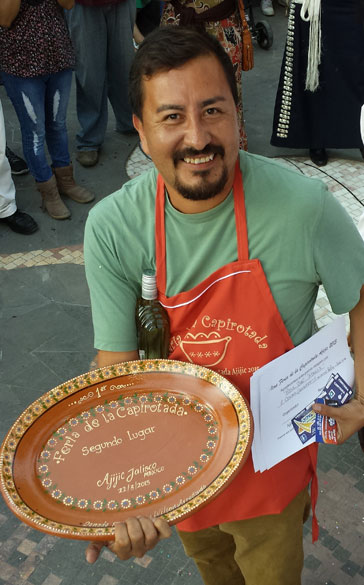 While the six judges doled out gifts to the five best dishes, the real winners of the day were the several hundred tasters who strolled among the tables chowing down on first one and then another generous serving of the sweet bread dish.

Ajijic family matriarch Maria Beltran, 84, received a unanimous first place nod from all six judges with her perfect old-fashioned capirotada. While her son, Pablo, had entered the competition, he seemed more excited to have his mother win. A daughter, also known as an expert cook of traditional Ajijic dishes, was also on hand and bursting with pride.

Also receiving equal points from all six judges was second-placed cook Jose Melendrez, who had entered twice, putting a slightly modern twist on both recipes. His apple capirotada was good, but the judges marked it down a tad because the apples were not quite tender and the flavor was a bit understated. His secon

d entry added coconut milk, shredded coconut, almonds, pecans, dark and light raisins and other goodies. This recipe hit the high mark earning him a bevy of gifts and prizes.

As people continued to rotate around the kiosk sampling the capirotada dishes, Hopper wiped sweat from his brow and beamed.

“If we can put this together in less than three weeks, think what we can do for next year with a whole 12 months to work on it,” he reflected. “This is the first time capirotada has been celebrated anywhere in Mexico. Next year we’ll come back bigger and better. We’re thinking of making the world’s largest pan of capirotada and of trying to get the Guinness Book of World Records people here. Now that would be something.”