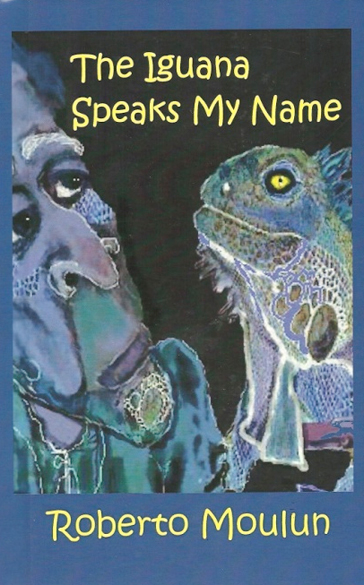 The Iguana Speaks My Name

Like life itself, this fine novella, “The Iguana Speaks My Name,” is largely without plot, but because of that both place (the village of Panimache in Guatemala) and persons (the villagers) come to life without the restrictions of plot, without reader concern for “what will happen next.” Plot in so many stories by so many other authors pushes us relentlessly toward conclusion, much like going on a long journey and seeing only the well marked path, not noticing – as we do in Roberto Moulun’s stories – the woman in the cove, standing under falling water that “kissed her red nipples alive,” whose long black hair, as she twirled, “covered her like a silk fan.”

The second half of Ajijic resident Roberto Moulun’s remarkable book is a collection of short stories, “Ten Backyard Stories from Panimache,” stories which generally revolve around a situation that does indeed organize itself into a simple and appropriate plot, all told with the same power and grace of “The Iguana Speaks My Name.”

In “The Iguana Speaks My Name,” Quince, our narrator, is worldly, educated, thoughtful, reluctantly sophisticated, yet by choice he returns to Panimache, the village of his youth. There, his house “had a grace and beauty … no matter how badly the weather treated it, no matter how neglected it had been through the years.” As you pass through his red gate and into the street, you step “… onto the hard cobblestones of Calle Quatro de Febrero, which was the official name of our street. It was not a good name for the street. It had been given in mournful memory of the victims of the earthquake, which devastated the town on that date. But no one ever called it that. The street was known as Calle de Farolito, because of the house of the little red light – the only cathouse in the village located on the corner of the street, proclaiming that life, no matter how sinful, beats death by a long margin.”

It is a time of civil war in Guatemala, but the people of Panimache “went about their business smiling in bliss, like the Fool of the Tarot about to step into the abyss.” The soldiers themselves acknowledge that “The victims are always the same – the Indians and the poor.”

As we begin our little stay in Panimache, we meet characters like La China, the whore who “looked like Olympia in the painting by Manet; Alizarin, the artist who waits for a letter that never arrives and who supports himself by baking bread using old recipes from his home in France; the postmaster, Don Cosme, “who smelled of anisette and his young assistant”; we also meet Margarita, “lovely in her ripe womanhood,” and Quince’s childhood friend Uno – whose father Don Emilio called his fourteen children by numbers and who playfully adopted the narrator as his 15th child and dubbed him Quince. We even come across two green parrots, taught by evangelists to yell from their cages, “Jesus loves you; Jesus loves you.”

The town of Panimache also is a character, whose streets were “gnarled like the hands of old women; the town itself was old without having known the dissipation of youth. It transpired the self-righteous morals of someone who had never had a chance to sin.”

I love the rich, profound, evocative, sophisticated, and often unpredictable prose found in lots of South American literature, in writers like Gabriel García Márquez and Isabel Allende. Nevertheless, the very nature of this type of prose makes its adherents vulnerable to the temptations of excess. In the prose of García Márquez, for example, I sometimes feel he grabs his image by its scaly tail and then hangs on so long that he is pulled too far into a dense jungle, while the story itself remains waiting for him until late into the night. Not so with the images of Roberto Moulun, who remains faithful to the brief courtship between his story and a metaphor. While Quince is listening to Alizarin lament the lack of a letter from his beloved in Germany, he himself begins to daydream: “Soon my memories ran off, as watercolors do if one is not careful, and I had only feelings left without the forms that would make it possible to share them to others.”

In Moulun’s stories, even simple similes are fresh, often masterful: “his house, a comic construction of adobe, whitewashed like the face of a mime”; “A handful of light bugs misfired like wet matches”; “The villages followed one another, like pretty sisters on their way to school.”

In Part II, “Ten Backyard Stories from Panimache,” we meet again some of the characters we had become accustomed to in “The Iguana Speaks My Name”: people like Quince the Narrator, and Uno, his best friend, a jungle guide and nature photographer for National Geographic — actually they had “grown up together, better than brothers”. Most of the characters are new, though. And, in Part II, we often leave Panimache to visit towns with names like Solola, Jaripito, Mazatenango, again the towns themselves becoming characters: “Mazatenango has known better times. One can tell, because all of its streets are cobbled, and now the stones roll loose like bad teeth. The town is indifferent to its past and holds no hope for its future. It asks only to be left alone, to be left behind in the heat and dust, a tired town, empty of dreams. But one cannot leave her. One loves the pueblo as one loves an old wife.”

In these stories, as in “The Iguana Speaks My Name,” there is sensuality lurking in the dark shadows, even a dangerous sensuality, where a belle dame sans merci may with her beauty bewitch you out of your very soul and even to your death, as in “Siguanawa, The Spirit Temptress,” which begins, “The night was sultry, feminine and tender, like a mulatto woman from Camaguey.” On the other hand, we find a delightful sensuality in stories like “The Novena to San Martin,” where a situation worthy of Boccaccio allows us to eavesdrop upon a jealous and lovesick suitor who is nursed back to health and sanity by his landladies, two lovely and identical twins.

These Guatemalan villagers we come to care for live close to the bone. There is desolation, sadness, sudden loss, unrequited love, huge longing, and not much hope. Nevertheless life here is still more authentic than in more sophisticated towns and cities; and life, to quote again a passage I used near the beginning of this review, still “beats death by a long margin.”

Author Roberto Moulun, who now lives in Ajijic, Mexico, was born and raised among the indigenous people of Guatemala. His father was French, his mother Spanish. As a young man, Moulun left to study in Mexico City, eventually becoming a psychiatrist, largely practicing (for 60 years) in English-speaking America. English, the language in which he writes this book, is his third language.   On Saturday, February 23, Moulun is the featured speaker at the Meet the Writer luncheon held at Oasis Cafe in Riberas del Pilar at Lake Chapala. For details send email to:This email address is being protected from spambots. You need JavaScript enabled to view it..