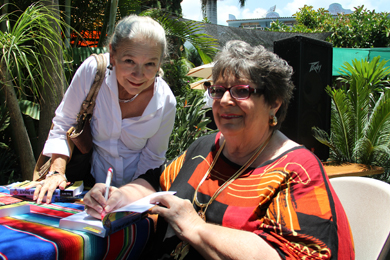 In her first book, “Living at Lake Chapala,” local writer Judy King has compiled a treasure trove of information with equal appeal for seasoned expat residents, newcomers and folks still contemplating a move to the area.

Breeze through the opening section — a scant 15 pages contained in four chapters — to get a sense of the balanced content, covering everything from the nuts and bolts of day-to-day living to the author’s personal insights on grasping the essence of putting down roots at lakeside.

By then you’ll be hooked on King’s straightforward writing style and be easily tempted to read the entire tome cover-to-cover in a single sitting. After that, you’ll want to keep the book handy for future reference on practical matters, such as how to make a telephone call, employ domestic help or deal with health care issues. Comprehensive guidelines for settling in to residence at lakeside include tips on renting, buying, building and remodeling a home, based primarily on the author’s early experiences here as a real estate agent.

If you’re among the local consumers who depend heavily upon SuperLake to fill the pantry, but often grouse about the price tags, be sure to read “Importing What You Want” (Chapter 56). King’s interview with friendly store manager Pancho Montes provided fodder for a rundown on all that is entailed in stocking the shelves with an array of familiar and exotic imported products, putting everything from American brand basics like sugar and flour to Hamburger Helper, Marmite and truffle oil at the fingertips of local shoppers.

But the real heart and soul of the book rest in King’s essays on authentic Mexico, comprised in the 15 chapters appearing under the heading “The Adventure that is Mexico,” and most explicitly in the final segment entitled “The Lessons of the Adventure.” Those pages reveal that she is one of the rare expat settlers to have taken the full plunge, stepping beyond simply managing survival in a strange and seemingly unfathomable culture to actually relishing her adaptation to Mexican customs and lifestyles.

“Living at Lake Chapala” was unveiled Friday, July 26 at a reception held in the garden of La Nueva Posada where King contentedly greeted guests and scribbled personalized autographs on the book’s title page. To introduce the new release, she and poet James Tipton alternated at the podium to entertain the crowd with short readings from the text.

“The only item on my “bucket” list was to hold my own book in my hands and now I’ve done it,” King remarked proudly as she launched into a reading of the brief introductory chapter. In the second paragraph she explains her own motives for moving to Mexico in 1990 with a telling quote from Paulo Cohelo. “If you think adventure is dangerous, try routine. It is lethal.”

A wealth of material

In 2001, with a decade of full-time residence in Ajijic under her belt, the native Iowan and southern California transplant, paired up with Karen Blue to guide other new and prospective expat homesteaders by launching the Mexico Insights seminar program and Living at Lake Chapala, a complementary monthly on-line subscription magazine.

Five years later King was forging ahead solo in those pursuits, adding on to her workload in 2008 when she took over editorship of the monthly print magazine Lake Chapala Review.

In March of this year King decided to suspend the Living at Lake Chapala ezine and mine the wealth of material accumulated over the years for a trilogy of self-published thematic guidebooks.

Volume two of the Mexico Insights series is titled “The Mexico Kitchen: Tastes and Tales of Jalisco.” The third book will be “Fiestas! Mexico’s Celebrations of Fireworks, Family and Faith.”

Highlights of the “Living at Lake Chapala” coming-out party were King’s amusing demo of common Mexican hand gestures in which she recreated an entire wordless conversation between two men standing on opposites sides of a soccer field, and the reading of Chapter 74’s “Party in a Box,” a humorous, self-deprecating account of hosting a child’s birthday party that perfectly exemplifies her personal epiphany on the contrast between Mexican and Anglo approaches to get things done.

Rounding out the festive occasion, King invited her guests to a toast with Paloma cocktails, a refreshing blend of tequila and grapefruit soda, and to savor a spread of Mexican flavored botanas prepared by long-time pal Lorraine Russo, the Nueva Posada’s executive chef who is collaborating on the next book.

“Living at Lake Chapala,” priced at 300 pesos, is now on sale at La Nueva Posada, Diane Pearl Colecciones, SuperLake and King’s carry-out comfort foods stand at the Monday Market. A Kindle edition is available through Amazon.com.