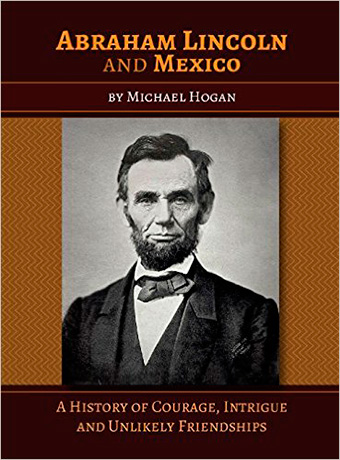 For years, Michael Hogan has inspired students to question political and cultural certainties. He taught them how to read critically and how to translate primary sources into clear historical insights. His latest book is the embodiment of his teachings. In “Abraham Lincoln and Mexico,” Hogan sets out to challenge the triumphalist narrative of the Mexican-American War. It is a clear and uncluttered text anchored firmly in a critical survey of primary sources and contemporary research.

Famous and forgotten characters populate this snapshot of the long relationship between Mexico and the United States. Their actions, hesitations, personal failings and virtues influenced the course of the Mexican-American War. Men like Henry David Thoreau and Senator Thomas Corwin were horrified by the atrocities committed by American troops in Mexico in 1847. Inspired by a disgust of violence and slavery, Thoreau would go on to write his classic essay “On Civil Disobedience” while Senator Corwin risked his political career by speaking out against the war.  The New England anti-war movement, abolitionists throughout the young nation, and groups of conscientious objectors, resisted Polk’s policies on similar grounds.

Hogan’s Lincoln serves as the nodal point in the chronicle of the beginning, middle and end of this war: from Lincoln’s opposition to Polk’s territorial ambitions to the eventual cross-border cooperation to defend Mexico against French aggressions. “Abraham Lincoln and Mexico” contextualizes the historical and contemporary relationship between the two countries and also highlights their intertwined fates. While the book offers a damning critique of the more disturbing features of American foreign policy, it never ceases to recognize the grit of past conscientious protesters that continues to inspire present-day activists.

This book is as much about the American leader’s moral objections to the war against Mexico and slavery, as it is about his faltering moments and his political maturation. Unlike other accounts of the Mexican-American War which have robbed Mexicans, former slaves and immigrant soldiers of their complexity, Hogan reminds us that they were not passive victims of injustice, they were also men and women who rose up against that injustice and fought. Matías Romero, was the tireless diplomat whose heroic efforts may not have prevented the loss of Mexican land and lives, but definitely helped save Mexico from another invasive force. Furthermore, Hogan fights the stereotype that casts black troops in secondary roles. Black soldiers fought for their freedom and then some continued to fight alongside Mexicans as volunteer forces.

“Abraham Lincoln and Mexico” is also important for Mexican students. Politicians have long over-attributed wrongdoing to the United States and have exploited the resentment inspired by unjust policies. However, it is as important for Mexicans to acknowledge the complex history of the United States as it is for Americans to understand their Southern neighbor. I share Hogan’s hope that “Mexican historians will also see that the great victories of Mexico over the imperialist armies of France and Austria are in no way diminished by acknowledging the aid of the volunteers, black, white, and Native American[.]”

Today, there are two major trends vying for American support. One seeks to unify under an inclusive umbrella that embraces a vast number of identity groups while the other preaches extreme exclusion in racially and ethnically-charged terms. Blind patriotism writes and rewrites historical myth, it does not aim for accuracy and historical consensus; its objective is to create a “fit-for-purpose” narrative. The historical myth denies wrongdoing and it creates the dangerous self-perception of superiority and near infallibility. This is why “Abraham Lincoln and Mexico” should be considered an important resource for institutional and non-institutional learning in both countries. This book does not present an oversimplified version of the events and it does not engage in U.S. and Mexican stereotypes. Hogan accomplishes what he set out to do: he humanizes the long-admired leader, displaying his flaws and strengths, and he also humanizes those who served alongside Lincoln, military men, civil servants, Mexicans and Americans.