A new biography on the extraordinary life of the late Leonora Carrington, the British artist who made a name for herself in Mexico rather than in her own country, hit the real and virtual shelves last week.

“The Surreal Life of Leonora Carrington” is penned by Joanna Moorhead, a writer for The Guardian newspaper who was related to Carrington on her father’s side.

Although she had heard snippets about her father’s cousin,referred to as “Prim,” growing up, Moorhead had always been led to believe that she was a “black sheep” who had run off to become an artist’s model after failing to net a husband as a debutante. But when she delved further into her relative’s life, Moorhead was astonished to learn that, prior to World War II, Carrington had given up her privileged life in upper-class England and eloped to Paris with her lover, the famous surrealist painter Max Ernst. And while she knew Carrington had become a somewhat successful artist in her adopted country of Mexico, Moorhead did not understand the extent of this fame her until she traveled to Mexico City to meet her mysterious aunt, now in her late eighties.

Over the course of the next five years, Moorhead made multiple trips to Mexico and developed a close relationship with Carrington, piecing together a fascinating life story that went from the heart of the Paris surrealist movement of the 1930s, to a Spanish jail, to asylum in Portugal and eventually to Mexico City, where she settled, created the bulk of her artistic legacy – and extensive writings – and raised a family. 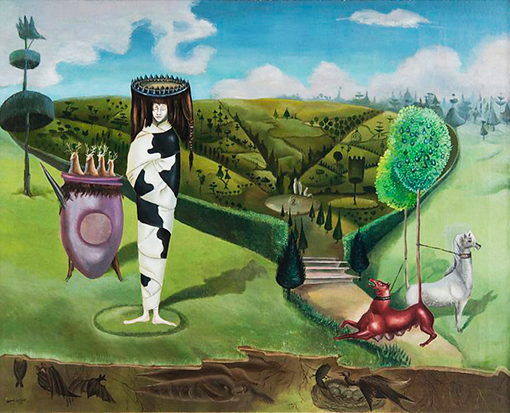 After penning an article about her aunt for The Guardian, in 2010, Moorhead curated an exhibition of Carrington’s works in Chichester, Sussex  – the first time her work had been seen in a

public space in the country of her birth since 1991. A major show at the Tate Liverpool followed in 2015 and the U.K. art world finally started to appreciate this long-lost talent.

Moorhead’s book is eagerly anticipated, as it comes from a fortunate position: as a relative and creative soul mate who gained a unique insight into a remarkable, independent, wise and talented woman, whose indifference to the fame she achieved in Mexico is a refreshing antidote to a world driven by celebrity culture.

As Moorhead noted in an article the Guardian last week coinciding with the publication of her book, she quickly discovered that formal interviews with her aunt were off limits, that their relationship was different. “The first time I got my notebook out of my bag, she looked at it and shuddered. I explained that I needed to take notes, because I was going to write an article about her. ‘Write an article if you must,’ she said, ‘but you can put that away. You’re not a journalist here.’”

As to why she wrote “The Surreal Life of Leonora Carrington,” Moorhead explains: “I did it for myself, because I recognised her as someone with a great deal of wisdom, someone who tapped into some of the deeper reaches of the human experience; but I also did it for all those relatives she had left behind. I listened to why she had to leave; why she felt constrained and restricted, like the mummified woman in her painting ‘Green Tea,’ and how she knew that if she was to live out her destiny as an artist, the only choice was to get away.”

“The Surreal Life of Leonora Carrington” is published by Virago and is available at Amazon.com and other internet book sites.  Hardback and Kindle.