“Señor Bradley’s Guide to Mouthing Off in Mexico” diverges from a work-a-day linguistic handbook in a few ways: it is unclinical and casual in tone, expressions a partisan affection for Mexico and its linguistic idiosyncrasies, and utilizes a discernible voice. 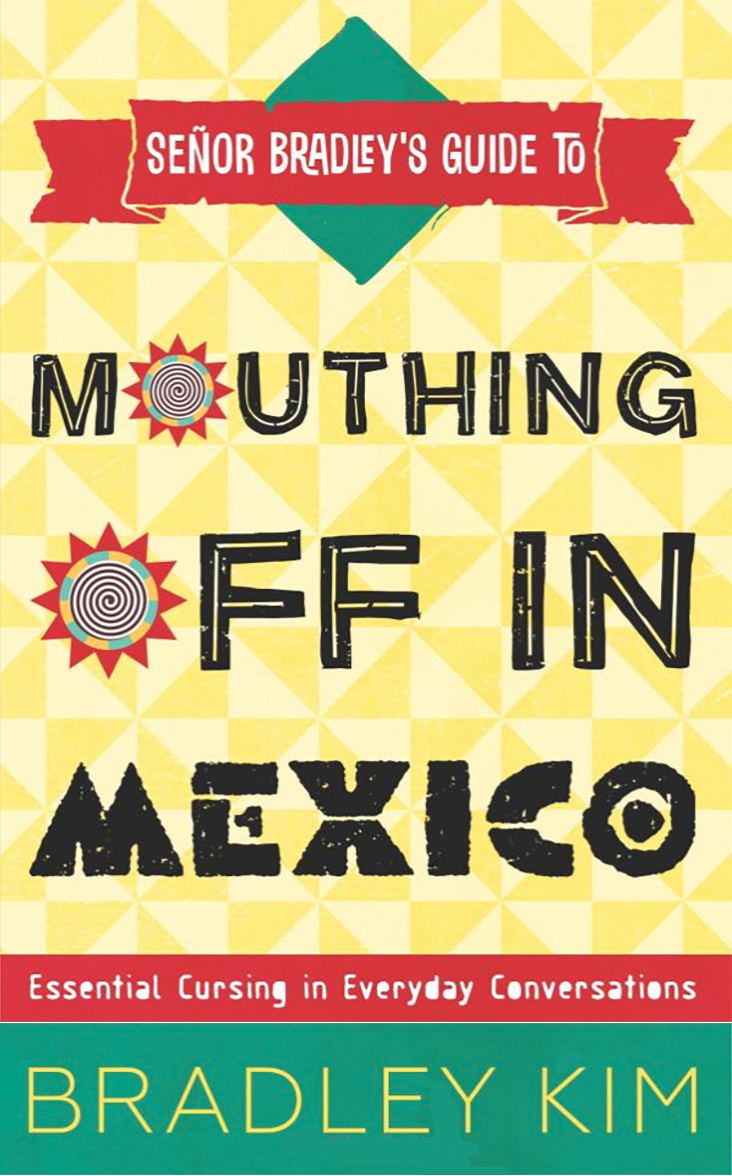 Also, accompanying many of the book’s words and phrases are handy bits of advice for navigating the random byways of the country’s customs.

Last and most important, Kim’s book is concerned almost exclusively with Mexican Spanish’s fecund, pungent subcutaneous layer, rather than the official scholastic version.  Beware those who seek within its pages the means by which to engage in a genteel tete-a-tete in King Ferdinand’s court.

While it’s not a traditional how-to language book, Kim does an admirable job of organizing his slim volume into various social and anatomical categories.  He starts with an arsenal of phrases and words useful during a night on the town – itself subdivided chronologically from pre-game drinks all the way through to dehydrated self-loathing the next day – and then proceeds to catalogue the epithets and nicknames commonly applied to “loose” men and women, synonyms for various genitalia, and the more base bodily functions.

Following the book’s preliminary assault upon lexicographic decency is the meat of the work, what he terms “The Big Five” – a quintet of ubiquitous and highly flexible words which can be heard tripping off the tongue of many a Mexican citizen as he goes about his day.   They are, from mildly abrasive to paint-peeling (in fact, Kim gives each term 1-5 chiles, according to their strength): carajo, madre, chingar, puto and verga.

Of these five malicious little linguistic swiss army knives, chingar might have the most uses.  But he gives each word its due, and furthermore gives examples of how two or more can link up to form, Voltron-style, truly corrosive, ‘roided out mega insults to make Don Rickles blush all the way up to his liver spots.

What I find most laudable – and what may for some constitute a sticking point – about Kim’s approach is how unconcerned with upbraiding tissue-like sensibilities it is. He presents even the most unsavory idioms with a breezy lack of judgement.  His aim, after all, isn’t to provide a commentary upon Mexican society vis-a-vis its slang, but rather to unfurl and present without apology to you, the reader, the unruly skein of parchment upon which is scrawled the quotidian, colloquial Mexican idioms as they exist in all their unvarnished glory.

Radiating from between the lines of the work is Kim’s emotional connection to his semi-adoptive country.

“I love the beautiful sunsets, the absence of traffic and high rise buildings that block the sky, the ability to go to dinner with someone on a moments notice instead of planning it weeks in advance,” explained Kim to the Reporter.

“I love being able to drink one-dollar beers right on the beach.”

Before compiling this diminutive opus of Mexican profanity, Kim lived the life of the proverbial man in the grey flannel suit, working in California as a customs broker in the import compliance department of several Fortune 500 companies.  From 2008 to 2016, Kim resided in the Pacific coastal city of Mazatlan, having moved there after becoming fed up with the rat maze-like repetition of commute-cubicle-commute that characterized his working life.  He currently splits his time between that city, which he has great affection for, and Helendale, California, an unincorporated town southwest of Barstow in the Mojave desert.

If there’s one criticism which could be leveled at “Guide to Mouthing Off in Mexico,” it’d be that it ends too soon.  But that is by design; the book is, in fact, the first in a series of four books he intends to roll out in the near future, all dealing with the myriad nuances of Mexican Spanish.   You can keep track of their publication status and his other activities vis-a-vis goldenzonepublications.com.