Every night of the week, La Fonda de la Noche, nestled on an urban street corner behind a thick, distinctive hedge of trees trimmed into archways, serves up a selection of Durango-style dishes to patrons tucked away in about eight small dining rooms scattered throughout the three floors and terrace of what at first appears to be a tiny eatery. 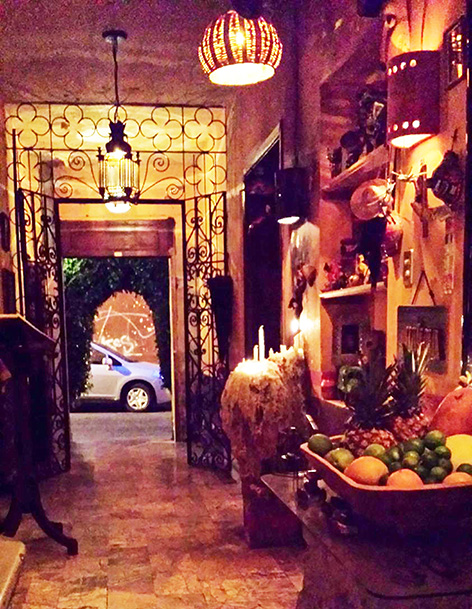 While an inelegant translation of its name — Diner of the Night — may suggest a greasy spoon, the restaurant is instead notable for its magical, twinkling atmosphere (no televisions!), its beautiful tablecloths, its offering of eight main dishes and three or four appetizers (which remain almost the same every night), its recorded bolero music (a Latin American style of the 1950s and 60s) and the personal involvement of its longtime (22 years) owner-chefs, Carlos Ibarra and Raul Rios.

On a recent evening, a waiter speaking excellent English, explained the offerings and we selected chiles en nogada (132 pesos), a very Mexican dish of sweet poblano chiles stuffed with meat, nuts and pomegranate or strawberries and covered in a creamy sauce.

For a beverage, the agua tropical, made of six types of fruit and a bit of sugar, at 32 pesos, was a good choice. Beer is also available.

In addition, we enjoyed a unique, crispy appetizer dubbed “Suspiro” (sigh), which is a thin slab of Mennonite cheese that is grilled on a stainless steel sheet and served with two homemade salsas for dipping the broken-off cheese “chips” into, one very hot, the other milder.

A regular patron who lives nearby, on the other side of an ancient-looking church, La Capilla de Jesús, and the public market of the same name, waxes eloquent about La Fonda de la Noche.

“My favorite is the Combination Plate, which isn’t on the menu, and is a bigger portion than some of the other dishes, but still not expensive.” (It is 111 pesos.)

“I can always count on the music being something I really like,” she added. “It gives a romantic atmosphere, yet I feel comfortable going alone.”

Another offering, pozole (corn and pork stew), is the style typical of this area, Jalisco, not Durango, explained co-owner Carlos Ibarra.

“The menu principally comes from my mother,” he explained. “The enchiladas, sopas, tostadas and medias lunas [savory, filled pastries] are from the sierra community where I grew up in Durango. Raul Rios or I make everything — all very natural.”

“Many of our customers come here regularly,” said a waiter, “and our reputation comes mostly from word of mouth, not advertising.”