Former Hollywood chef German Gonzalez will now be seen in Jocotepec in a new larger venue.

German, the owner of a chic 25-seat bohemian restaurant called Rincon de Frida in the town center on Hidalgo Sur, is soon to transform that establishment into a 70-seat restaurant, name intact, and move it to the grounds of the well-established Posada El Pescador hotel on the carretera.

A native of Jocotepec, German left as teenager. His grandfather had himself left Mexico to become a farmer in California as part of the World War Two-era bracero program; German’s uncles still live in California’s San Fernando Valley, where they took care of him and his formal education.  Later, he began his own education as a chef in the Hollywood hills. 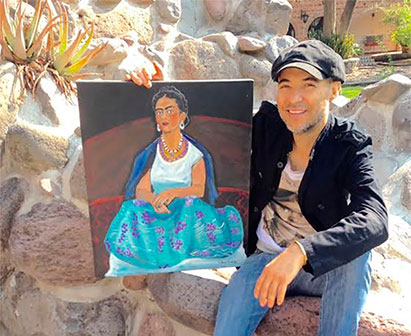 Always an art lover, with a leaning to interior design, German worked for some of Hollywood’s best eateries. Two memorable places were Café Opereta (now closed) and Café Aroma in Liberty Park.

Armed with tastes in the trendiest of the trendy and evangelical convictions on healthy eating, German returned to his home town at age 32 to open the original Rincon de Frida.

“Now, at the new Frida’s on the carretera, I plan for our neighbors in Ajijic to come to us for a change, where they’ll enjoy a touch of class. We have hotel parking, plus a wonderful outdoor cobbled mall for monthly art exhibitions by local artists,” he said.

German’s globe-trotting hobby has brought a harvest of brilliant food ideas, recipes and creative décor influences back to his home town of Jocotepec.

“I bring my experience from Chile, Ecuador and central Europe - plus, of course, the Left Bank in Paris - to help enrich the experience for our guests at the new Frida’s.”

The cuisine will continue with a light, fresh and healthy tone with a highlight on soups, including mushroom, carrot and Gonzalez’ signature dish, Huitlacoche corn soup.

Fish, chicken and shrimp-based dishes will soon be offered as well.

Cocktails include mojitos and margaritas, which look good enough to eat as much as drink. The Chiapas coffee, brewed to order, is reason enough alone to stop by.

“My admiration of Frida Kahlo — a talented Mexican artist and a strong woman — dominates but doesn’t overwhelm our new, more spacious home,” he said.

Entertainers, including the popular singer Lola la Tequilera, will be invited back to appear monthly on the restaurant’s larger terrace stage.

German welcomes the public to a cocktail party, Sunday, June 18, from 5 to 7 p.m., for the first chance to see the new Rincon de Frida’s revealed.