I am guessing you have not discovered the Ajijic’s newest brewery, because if you had, you would be there every weekend.

The Cervecería 8 Maltas is located on the west side of town, with the road entrance across from La Pueblita. Once you turn off the Carretera, it’s just a jump to the left and then a step to the right. Their formidable structure is on the west side of the dirt road, and parking can be found along the roadside.

I have mad respect for people with vision. In addition to the active warehouse brewery, the kitschy indoor dining and the grassy garden tables, they have built six Airbnb studios around a very attractive pool and hope to expand their dining options by creating a rooftop lounge. Both times I have been there, we chose to sit inside, due to the industrial vibe and cool décor. The large entry with a roll-top garage door opens to patterned tile flooring, metal tables and chairs that have been custom painted with the logos, floor–to-ceiling glass windows overlooking the brew tanks and a whimsical mural near the kitchen.

They keep eight beers on tap and each is equally delicious and different. Some of the draughts are their own and some are brewed elsewhere, but the variety is complementary, and I highly recommend ordering a sampler and tasting all of them. Once you have determined your favorite, you can purchase either a pint or a growler. 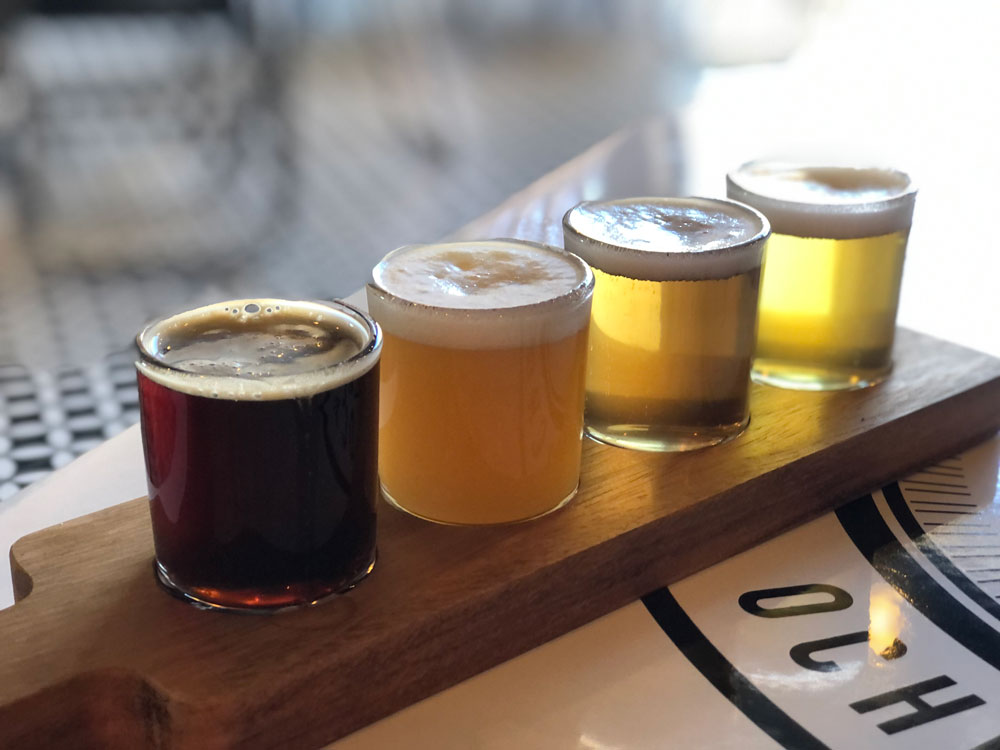 Their Black Bean Baltic Porter is dark and frothy and yet light in its delivery.  Their Pilsner was refreshing and lemony and very drinkable. The Strong Ale is deceptive in its naming, as I found it to be my favorite. At 6.5-percent alcohol, it was my Goldilocks choice: not too dark, not too light, somewhere in the middle. They regularly change out the kegs to keep the menu fresh, and if your favorite of their particular homebrews isn’t on tap, there is a good chance they have it by the bottle. Their selection of bottled beers is extensive and they also feature gin and tequila cocktails.

While we were partaking of our samplers and enjoying the sunny mountain views, the smells from the kitchen were very encouraging. We started with their fried calamari, which is the best I have ever tasted. It was crispy, lightly battered and so incredibly textured. The crunchy exterior captured the seasoning and salt in its nooks and crannies and the interior was tender. Next was a plate of their tuna ceviche. The mango habanero dressing offers a warm but friendly heat and coats the combo of red onions, cucumber slices, green olives, chunks of fresh tuna and kiwi! Who knew that kiwi and green olives complement tuna, but they do! The texture of the kiwi and the tuna are so similar, and the kiwi offers a cool element to the habanero. It is a real surprise and pairs perfectly with the Pilsner.

The fish tacos are served three-to-a-plate, and the presentation is attractive and straightforward. The fish was seared and caramelized, but juicy on the inside. Pickled onions, green sprigs of cilantro and a slice of peppery radish made for ideally balanced bites, but adding a dollop of their smoky green salsa put the taco right over the top.

And last, but not least, we split the grilled ribeye “burger” we had heard so much about. Delicate nuggets of ribeye were nestled between homemade brioche buns, bathed with drippy gratin cheese and slathered with a creamy sauce containing diced pickles. The jus from the ribeye mingled with the mayo of the carrot and cabbage slaw, and soaked right into the slightly sweet brioche, which is baked with whole grains of malt to garnish the top.

House made potato chips, again appropriately seasoned and not a drop of greasiness to them, should be sold by the basket as a salty enticement to order more beer.

Cervecería 8 Maltas’ wait staff is attentive and personable. The management is present and eager to ensure a good experience.  They are open Thursday through Sunday from noon to 9 p.m. You can find them on Facebook.