Tell someone in Guadalajara that you are going to eat at a food truck and the reaction could be, “I don’t eat on the street,” with all the worries about cleanliness that implies.

First of all, only one or two of the nine trucks in his Food Park Court Guadalajara serve traditional Mexican fare — in this case, arrachera steak and popular seafood concoctions. The others serve Italian food, hamburgers, roast beef sandwiches, sushi, fusion fare and, soon, bagels and Indian food. (There is also a fixed bar, Erding, and a fixed wine island with Mexican, Chilean and Argentine wines.)

“The idea is gourmet,” Padilla underscored, “but on the street. Most of the guys here are professionally trained chefs.” 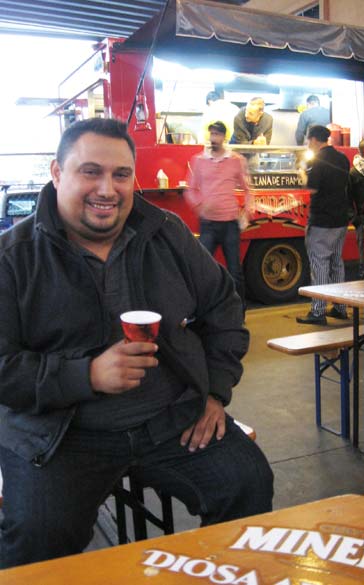 “Cleanliness is not a problem,” pointed out Ivonne Ruelas, a smiling attendant at a truck named Rampante, showing off her stainless steel equipment (including an oven and sink), running water, gas and electricity. Padilla explained that each truck also has a grey water disposal tank and access to a common area for washing utensils. (Food is served on disposable dishes.)

Padilla speaks excellent English honed by living in Vancouver for eight years. He said he got the idea to organize a food truck park from seeing the trend take off in the United States in the last year or two. Jose Ramirez, co-owner of Rampante and another truck, Brick Lane, noticed a similar trend in London where he worked for two years, before moving in 2012 to Guadalajara and starting Brick Lane  — the first food truck in Guadalajara, he claims.

While eating “on the street” is a matter of defiant pride to many native Guadalajara residents, Padilla says that reaction to his food truck concept from people with entrenched interests has been a bit negative.

“Most restaurants on Chapultepec serve wings and beer,” he noted, “and food trucks sometimes offer superior food at lower prices. So there has been pressure from restaurants to remove food trucks from the street. There were four or five on Chapultepec but they were removed. So when I saw how difficult it was to keep a food truck on the street, I looked for the correct conditions to make money.” He located the current spot a half block west of the Niños Heroes sculpture at the Chapultepec promenade’s southern extreme and set up the necessary inspection and licensing procedures for all the trucks in one fell swoop.

In contrast to restauranteurs’ reaction, customers’ acceptance of the food truck park during its nearly two months of existence has been outstanding, Padilla says.

Ruelas happily agreed, noting that, “Last weekend all the tables were full Friday night and all day Saturday.” In keeping with the establishment’s young, high energy environment, a blues band, Bad Boy Blues, plays every other weekend.

While there, I ordered a fusion dish at Rampante — lasagna de flor de calabaza (squash flower lasagna), a pleasant vegetarian dish with creamy sauce and a browned cheese topping, which included a small salad of very nice mixed greens for 75 pesos. I was glad for the roof protecting me from the rain but because of cold temperatures and wafting fumes from the smokers present (the whole outdoor park is a smoking zone), I carried the lasanga out.

Besides no entrance fee, a large number of wooden picnic tables and resounding music throughout the small “park,” customers may enjoy the free bathrooms. Hours are 2 to 10 p.m. on Tuesday, Wednesday and Thursday; 2 p.m. to 2 a.m. on Friday and Saturday; and 2 to 8 p.m. on Sunday. Entrance is on the north side of Avenida Niños Heroes directly across from a Pemex station and between Chapultepec and Marsella. Information: (33) 2014-2896. Website: www.foodtruckpark.mx. Facebook: foodtruckparkgdl.