Peering into its gloomy interior, the eye slowly adjusts, revealing a massive heap of mechanical typewriters stacked at odd angles about eight-foot high, stopping just two feet shy of scraping the ceiling.   Out of the middle of this forlorn heap of black, brown and beige obsolescence peers a small, rumpled man in late middle-age with the mien of a drowsy koala.

Jose de Jesus Hernandez Meza has been a resident of Nueve Esquinas, a compact urban jigsaw whose eponymous feature (nine corners) is formed by the haphazard convergence of three lanes, for 40 years.  Twenty of these have seen him tinkering with the epistolary machinery of a bygone era in his walk-in closet-sized shop, called Reparacion de Maquinas de Escribir (Typewriter Repair Shop).

Hernandez opened a glossy – and, as it turns out, expired – brochure plucked from the dusty shelves that line the wall opposite the front door. 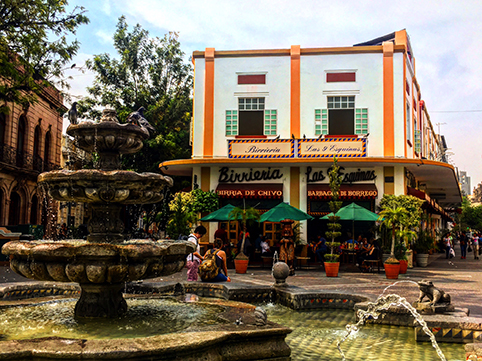 “This place isn’t here anymore,” Meza said, pointing at an advertisement in the brochure for a restaurant called Menuderia Colon.  He turned a few more pages and with his forefinger tapped a picture of palm trees on a white sand beach with a chalice of ceviche superimposed in the foreground. Emblazoned in orange letters at the top of the photo were the words Mariscos Migue. “This one is gone, too,” he murmured.   Then he looked up from the brochure and gestured mournfully in the direction of two old churches around the corner, uttering a similarly eulogistic phrase for the two ecclesiastical structures.

Rosa Gallardo, a member of the staff at El Compadre, the oldest birrieria in Nueve Esquinas, had a less funereal attitude towards her neighborhood than Meza, the typewriter repairman.  Standing in the doorway, she took in the plaza with a sweep of an arm.

“A long time ago, the train station was right here. Food vendors would post up here and there to meet hungry disembarking passengers,” she said.

El Compadre and two other birrierias, Los Paisanos and 9 Esquinas, form the neighborhood’s holy trinity of the Jalisco-born specialty birria, a rich, dark goat stew which could itself be considered (with pozole and menudo) a member of an even more holy trinity of comforting stews, one dedicated to curing maladies various and sundry (i.e., hangovers) rather than saving souls.

“Ours is the oldest birrieria [in the neighborhood], about 85 years old,” said Gallardo.  “They’re much younger, around 20 years old,” she added, nodding her head in the direction of Birrieria 9 Esquinas.

El Compadre was founded either in the late 1920s or early 1930s (dates varying not only from person to person, but also according to a single person’s momentary fancy) by Lupe Hernandez Palomar, one of the enterprising souls feeding the throngs of people exiting the steam-belching caravans of black iron which screeched to a stop at Plaza Nueve Esquinas.  Gallardo explained that, initially, Palomar operated his business on the steps of the property he had recently purchased, rather than inside.

“It was very informal, even more informal than the taco stands you see everywhere nowadays,” she said.  She explained how the building itself had to go through a few different life cycles before it became a restaurant, starting life as a house, then metamorphosing into a boutique, after which it became a cantina, and then, finally, a restaurant.

Despite an interior expansion, the property – like most of the buildings in the neighborhood – has remained almost exactly as it was at the time of its purchase by Palomar. Gallardo explained that it has to do with a concerted effort by the residents to preserve the history and heritage of their neighborhood.

“You’re not allowed to modify these buildings almost at all. They were named monuments of the nation,” she said.

Two doors down is Birrieria Los Paisanos, opened by Palomar’s brother, who had once worked at El Compadre.  According to Gallardo and her co-worker, Teresa Radillo, the split was amicable, unsullied by any sordid familial squabbles.  Radillo, folding napkins at a small table lit by late afternoon sunlight, painted a picture of the neighborhood as it existed then.

“All this [Nueve Esquinas] was a bunch of taverns, inns and cantinas. People came in to town on their donkeys from towns around Lake Chapala to sell their wares,” said Radillo.

Asked how she had seen the neighborhood change in her own lifetime, Radillo shrugged and said she thought there were a lot more bars now than before.  She paused for a second, then muttered something about “vagrants” before returning to her work.  At 5 p.m., the lunch/breakfast-only restaurant was quiet enough to discern the bubbling of birria broth coming from the kitchen, the primary soundtrack for Plaza Nueve Esquinas since Lupe Hernandez Palomar set up shop between 80 and 90 years ago, the wafting of his Pan-like concoction beckoning the travel-limp and famished to come hither and be nourished before continuing on with the day’s errands.