Guadalajara’s Miguel Hidalgo y Costilla International Airport, one of Mexico’s most important transportation nuclei, is acquiring more and more the aspect of a wildebeest expiring on the African savannah, yanked every which way by animals of varying size and strength.

The key players vying for this chunk of aeronautic carrion are: a farm collective demanding restitution and refusing to cede their remaining land for the construction of a second runway; a government organization refusing to pay the collective what it deems fair and just compensation; the airport management company in charge of building the second runway; and a consortium of business interests demanding all involved, as well as the federal government, resolve the conflict in order to get business flowing and the runway built. 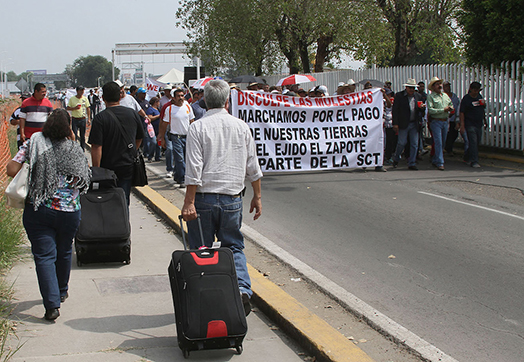 In 1975, several hundred hectares of land were expropriated for the construction of the Guadalajara International Airport.  Those being forced to relinquishing this territory were members of an ejido (farm collective), who were given the sum of 2.7 million pesos in exchange for the confiscated territories.

Cut to 42 years later: the ejido, known as “El Zapote”, is still contesting what they see as the government’s at-best-perfunctory attempt at reimbursement for the expropriated hectares.

El Zapote’s main adversaries are the Secretariat of Communication and Transportation (SCT) and Grupo Aeroportuario del Pacifico (GAP), a corporation contracted by the Mexican government that maintains and runs 12 airports around the country, including Guadalajara’s.

The latest cooling of relations between the SCT and the ejido occurred when the former backed out of an agreement, made on April 14, 2016, that would have seen El Zapote awarded 2.3 billion pesos, plus an additional 703 million for the purchase of “various goods”.  Instead, the SCT hired the Institute of Administration and Evaluation of National Assets (INDAABIN) to conduct a new analysis. The findings of this study resulted in the SCT offering the ejido just 62 million pesos, about 20 pesos per square meter. The collective rejected this assessment out-of-hand.

While it may be easy - and perhaps appropriate - to look at this situation as a David-and-Goliath scenario, Jalisco governor Aristoteles Sandoval places the blame on those who were in charge of arbitrating the dispute last year.

“The problem isn’t with any omission on the part of the state or federal government, but with the judges who left the amount to be paid open to ambiguity,” stated Sandoval.

Jalisco’s business and industry chambers and Sandoval are exhorting President Enrique Peña Nieto to resolve the issue and get the gears of business turning again.

They also view the construction of the second runway as an urgent priority, claiming it would greatly hone Jalisco’s competitive edge nationally and abroad. However, timelines presented by the chambers and GAP for the project’s completion differ drastically.

GAP, the entity responsible for the new strip’s construction, has scheduled the first phase of production to begin in 2020, the second in 2024, and the third and final phase between 2025 and 2026.

Meanwhile, Jalisco business chambers demand the runway be open for business by 2018.

This coalition of 31 business interest has gone so far as to publish a full page letter in Guadalajara daily newspaper, Milenio, wherein they state their demands for those involved (the SCT, GAP, El Zapote and law enforcement, in addition to high-ranking government officials like President Nieto) to resolve the almost half-century-old disagreement quickly — for the good of business, and by extension, all of Jalisco.

“In the context of our dynamic and diversified economy, which is constantly growing, it is unacceptable that our airport not be held to higher standards,” reads the conclusion to the letter’s introductory statement.

The farmers of El Zapote, meanwhile, lack the resources to place such an ad.  What ground they have been able to gain these 42 years is thanks to a weapon which is often the only effective recourse for people with little voice or means: their constitutionally-protected right to protest.

Last week, however, in an acknowledgment of the public’s frustration with the by-now-ubiquitous blockades, the ejido announced a suspension of protests and marches in the terminal area.

“Despite the continued lack of respect demonstrated on the part of the federal authorities and GAP towards members of El Zapote, we’ve decided to cancel our daily marches out of respect for our fellow Jaliscienses, airport users, and society in general,” read a statement issued by the ejido.

It was made known yesterday that El Zapote intends to recommence protest-related activities next Monday, July 3.