While at a glance it may seem little more than  innocuous fancy, a second look at the work of Zacatecas-born painter/sculptor Rafael Coronel reveals a decidedly odd bent of mind, one which has an uncanny ability to conjure up images that while otherworldly and, yes, fanciful, are also eerie disquieting. 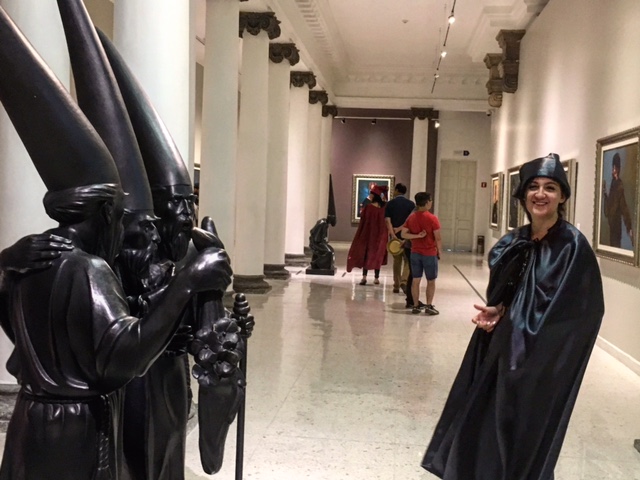 Through the middle of August at the Universidad de Guadalajara art gallery (MUSA), you will have the chance to immerse yourself in Coronel’s special brand of macabre surreality, and perhaps even submit – via gallery sanctioned cosplay – to the marginalized spirit of your bygone childhood.

If you’ve had the occasion to visit  Instituto Cultural Cabañas, Guadalajara’s UNESCO crown jewel, you may have already been introduced to Coronel. Upon entering the large initial courtyard you turn right and walk 20 paces under a shaded colonnade to a much smaller, sun-bleached one, where you will encounter three obsidian-colored figures in robes and long peaked caps, each grasping a disembodied head not dissimilar to their own.

This same trio of what could be described as magicians, medieval clerics or Celtic druids is the first thing you see upon entering the long, rectangular sala which houses Coronel’s show “Alegoria de la Razon” (Allegory of Reason) at the MUSA.

Born in the state of Zacatecas’ eponymous capital, it’s unlikely that the now 85-year-old Coronel would have become anything but an artist, having been born into an artist family where, among others, his grandfather was a church decorator and his older brother Pedro a painter.  During his long career the younger Coronel often rubbed elbows with Mexico’s art elite, including its most eminent of grey eminences, Diego Rivera, whose daughter, architect Ruth Maria Rivera Marin, he married.  They had three children before she died in 1969 at the age of 42. 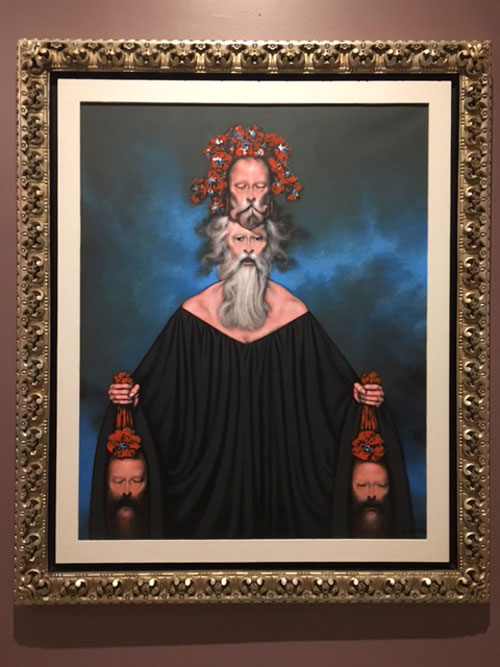 Not one, seemingly, to conceal his influences, the show gives several shout-outs to long-dormant volcanoes of visual art in the form of Caravaggio’s stark chiaroscuro and several close-to-verbatim quotations of the human grotesques of both Francisco Goya and Pieter Bruegel the Elder.   There is very little in Coronel’s work, however, of the Judeo-Christian ideological-moral baggage found in the aforementioned masters’ oeuvres.   Rather, Coronel’s canvases evoke a kind of pre-humanist atavism where the concept of good and evil have yet to be invented.

In his UdeG show, this moral ethos is expressed most fully in a series of canvases which are part and parcel with the aforementioned sculpted trio of disembodied-head-toting wizards.

I say “disembodied” rather than “severed” because there are no bloody stumps – no signs of violent decapitation: a blissful state of non-being.

Coronel’s, then, is a universe which, rather than being “immoral,” is one where its cloudy-eyed, vaguely pre-Christian residents float in the velvety blackness of pure, amoral irrationality, a world governed not by logic, but by the strange coherence of dreams.

It is this inner logic of delirium and madness that governs how young children perceive the world and construct fantasy, which is why, perhaps, “Alegoria de la Razon” offers museum-goers the option of donning robes and caps of navy blue, raiments by which to enter more fully into the exhibit’s pagan spirit.

This sartorial feature has the welcome effect of releasing the stale, mildewy air of obligatory cultural appreciation out of the gallery-going experience.  While a search for depth and semantic complexity is no doubt admirable in small doses, the herculean intellectual gymnastics exercised by many dedicated “appreciators” for the extraction of profound significance has, to my mind, its parallel in the excruciatingly painful passing of large kidney stones.

Therefore, best come to Coronel’s exhibit with the un-complicated ebullience of one who is interested in little more than simply deriving pleasure from the contemplation of beautiful surfaces.

“Alegoria de la Razon” by Rafael Coronel – who also has an excellent gallery dedicated to him in Zacatecas, itself a worthy destination – runs until August 12.  Entry to this and all other MUSA exhibits are free.  The facility is open everyday but Monday, 10 a.m. to 6 p.m. Go to musaudg.mx for more information. MUSA is at Av. Juarez 975, corner of Enrique Diaz de Leon.