A tranquil Wednesday afternoon in a Plaza Galerias burger joint turned into a bloodbath that left two people dead and six injured. 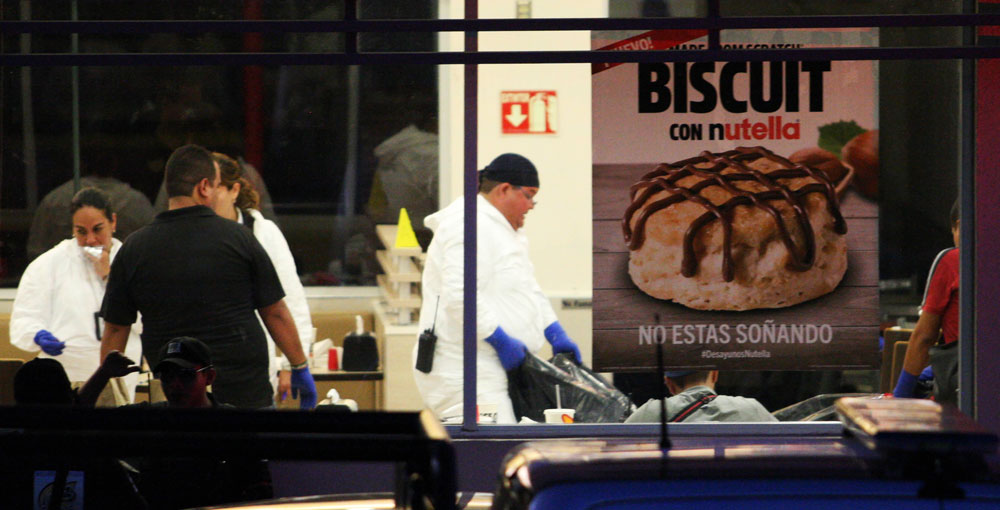 At around 4 p.m. on July 31, several gunmen entered the Carl’s Jr. restaurant in Guadalajara and began shooting at a group eating at one of the tables.

According to witnesses, various rounds of small-arms fire were exchanged as diners hid beneath tables or tried to flee the mayhem.

Maria Luisa Aguirre, the wife of the governor of Nayarit, was in the establishment with her two children and bodyguards at the time of the incident.

Several reports suggest that it was the bodyguards who actually exchanged fire with the assailants, but the Fiscalia General del Estado (FGE) has not commented on this.

One of Aguirre’s bodyguards was shot in the throat and neck and his condition is reported to be “grave.” Aguirre and her children were unharmed.

Following the incident, the Nayarit state government issued a statement denying that Aguirre was the intended target.

Witnesses estimated that around 30 shots were fired. Solis said the gunmen only used handguns.

Thursday, the FGE identified one of the deceased as Martín Arzola Ortega, 42, a known narcotraficante sometimes referred to as “El 53.” Authorities also confirmed that he was the intended target of the attack.

Arzola Ortega is considered one of the founders of the Cartel Jalisco Nuevo Generation. He was arrested by federal police in Tlajomulco in 2011 and, according to Spanish-language daily El Occidental, received a 24-year prison sentence in 2015. He was serving his sentence at a maximum-security prison in the State of Mexico when, sometime in 2018, he was released.  El Occidental said the details of his release are unclear. Some unofficial sources say these have purposely been withheld from the public.

The other deceased person was around 20 and has not been identified. He is believed to be one of assailants who targeted Arzola Ortega.

The other five injured persons – including two women – were all innocent diners apparently caught in the crossfire. However, an unsubstantiated report said at one point an assailant purposely fired at diners.

The injured were treated by Green and Red Cross medics before being taken to nearby clinics or hospitals. Solis said they were all “out of danger.”

The incident provoked a massive mobilization of security forces involving municipal, state and federal units. A large area around the restaurant was cordoned off while witnesses were questioned.  Carl’s Jr. staff could be seen conversing in small groups with shocked looks on their faces.

Although the restaurant is situated in the parking area just outside the covered Gallerias Mall, it is a prominent feature of the popular shopping complex, which also has Walmart, Suburbia and Sam’s Club outlets.

Nayarit Governor Antonio Echeverria arrived in Guadalajara Wednesday evening and visited his wife’s bodyguard at the private hospital where he is receiving treatment.

Referring to the incident at his Thursday morning press conference, Mexican President Andres Manuel Lopez Obrador lamented the fact that Jalisco is “experiencing a lot of violence,” but stressed that the federal government was helping state authorities here control the situation.