Following his January 19 extradition to the United States, Joaquin “El Chapo” Guzman Loera was arraigned on a 17-count “superseding indictment” the following day in federal court in Brooklyn, New York. 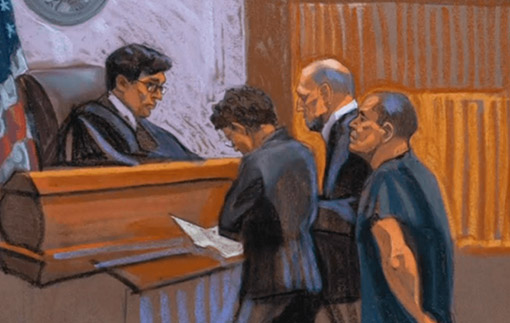 News reports stated that alleged drug kingpin displayed no visible expression as he listened to questions from a judge and declared himself not guilty of the charges.

According to a Department of Justice (DOJ) press release, Guzman was responsible for importing into the United States and distributing massive amounts of illegal narcotics between January 1989 and December 2014, and conspiring to murder persons who posed a threat to his narcotics enterprise.

Guzman is also charged with using firearms in relation to his drug trafficking and money laundering relating to the bulk smuggling from the United States to Mexico of more than US$14 billion in cash proceeds from narcotics sales throughout the United States and Canada.

The DOJ said that as part of this investigation nearly 200,000 kilograms of cocaine linked to the Sinaloa Cartel were seized.  The indictment seeks forfeiture of more than US$14 billion in drug proceeds and illicit profits.

The charges also allege that to evade law enforcement and protect the enterprise’s narcotics distribution activities, Guzman and the Sinaloa Cartel employed “sicarios,” or hit men, to carry out “hundreds of acts of violence in Mexico, including murder, to collect drug debts, silence potential witnesses, and prevent public officials from taking action against the cartel.”

The DOJ says that during the Sinaloa Cartel’s territorial war with the Juarez Cartel, Guzman directed his assassins to “kill thousands of drug trafficking competitors, during which many of his victims were beheaded.”

Robert Capers, the U.S. attorney for the Eastern District of New York, told reporters that U.S. prosecutors have more than 40 witnesses ready to testify against Guzman.