This is still Fiesta Season. That means noise here in Mexico. Day and night. The rockets are constant. And frankly, at six in the morning, it’s not a disturbance. It’s got to be the reason Quetzalcoatl never returned.

I’m used to it. But it rattles my poor dog. I’m not kidding. I had to wrap her head with a scarf to try to reduce the sound and calm her nerves. 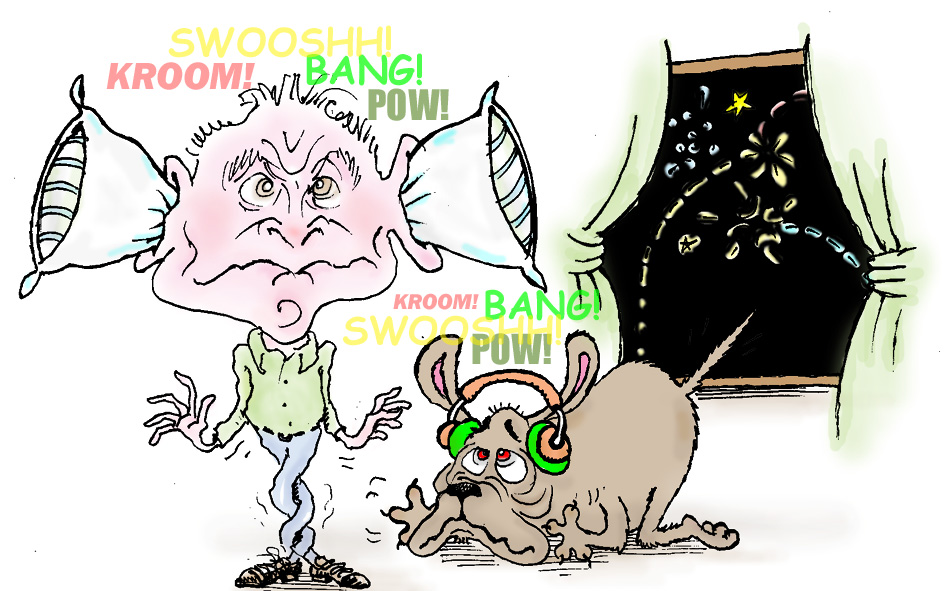 The rocket rallies always start in early morning as a long-held tradition reminiscent of centuries ago when Mexican villages were often awakened by pre-dawn raids. But the barrage of pyrotechnics can last well into the evening. These cohetes can range from modest fire crackers to rocket firings that could knock the Kepler probe out of its orbit. The end of November was an intermission while shattered window panes were replaced. November always ends with well-wishes to San Andrés, patron saint of Ajijic, and continued prayers that he will grant us a traffic light at Revolucion and the carretera.

From December through to the middle of January, Mexico carries on through an extended calendar of events which continue to be celebrated and punctuated with all manner of spectacular rockets and explosives shot into the sky, taking with them on occasion the unfortunate rocket-firer himself. What the heck happened to Jingle Bells.

The whole calendar of events ends, of course, with Christmas and New Year’s Eve and the Epiphany (and a lot of roof dogs with powder burns).

My favorite pyrotechnic is something called the Torito. This is the young man (who else) who runs through the streets with a papier mache bull loaded with firecrackers on his head. Everyone cheers and congratulates him as the explosives whizz off his head in all directions, until he is finally intercepted by medics with a restraining harness. This whole fireworks business in Mexico started with the arrival of the Spanish. So for those of us swearing and cursing and jumping up and down each time we’re surprised by a rocket blast that sounds like it removed a portion of your skull, you know who to blame. Polvora (gunpowder) was an invention the Spanish stole from the Chinese, who discovered it while playing with their chemistry sets.

That takes us to present day Mexico, where the pyrotechnic tradition has now become a way for the Mexican faithful to demonstrate how religiously sincere they are. It is believed that the louder and the more spectacular the rocket showers and thunderclaps, the more deserving of divine graces the sponsor of the event will be.  This notion encourages competition and showing off for His/Her favor. So why light a little candle at church or pass a few pesos on to the poor, when you can set off a booming barrage of 20 rockets in quick succession and have the Almighty’s head spinning. Never mind the wars He’s trying to settle or the pestilence He’s trying to prevent, rocket blasters get his complete attention and that insurance check people are always waiting for comes post haste.

Now, in most parts of the United States these explosive devices are outlawed for being too dangerous. The safer approach, as we Americans all know, is that if the kids want to raise a celebratory fuss, they hop down to their local gun store and pick up a .357 Magnum, a hell of a lot more fun than a cherry bomb. Yes, one thing you can say about the States: Safety First.

By recent accounts in the news, the Mexican authorities are beginning to enact noise pollution and disturbance laws, with a genuine intention of enforcing them. So it will be interesting to see their results. Or not.