The new government of President Andres Manuel Lopez Obrador received a stark warning on the 25th anniversary of the uprising of the Zapatista Army of National Liberation (EZLN) in southern Mexico. 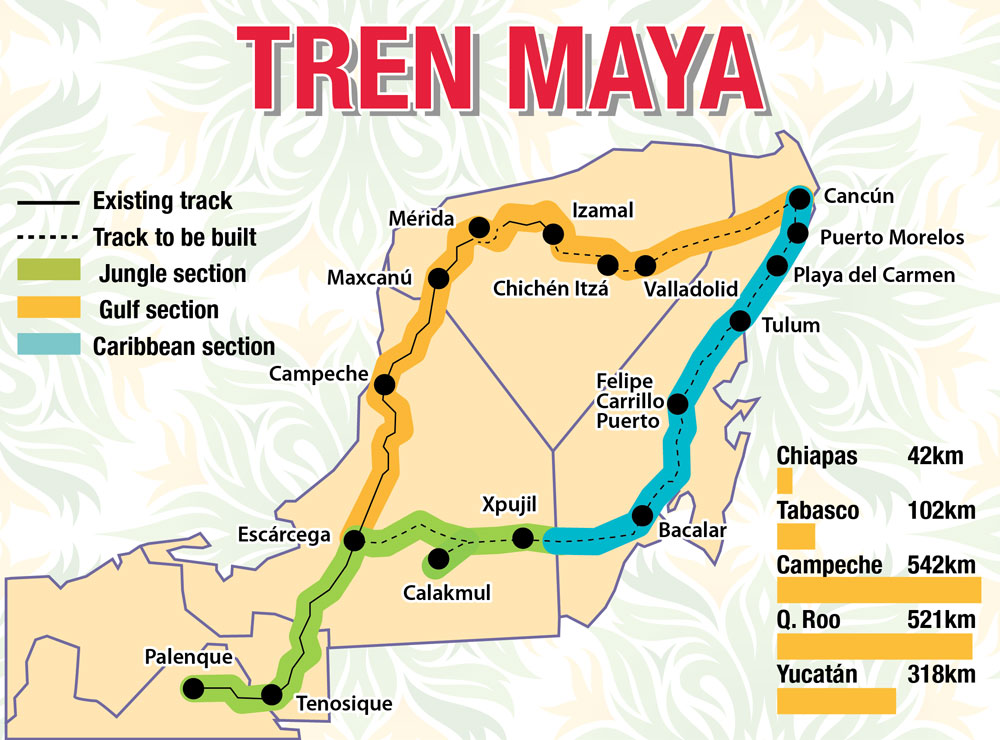 In the final minutes of December 31, leaders of the indigenous rebel group issued a statement saying they will not allow the president’s pet Mayan Train project to proceed.

Lopez Obrador has already set in motion plans to construct the 900-mile tourist train running from the Yucatán Peninsula through the states of Tabasco, Campeche, Quintana Roo and Chiapas. He strongly believes it will bring greater prosperity to thousands of economically challenged people living in the region. Many environmentalists, in addition to the EZLN, oppose the project on the grounds that it will seriously affect the biodiversity of the zone.

The message of the rebels – who control a significant number of “autonomous municipalities” in the Lacondon Jungle in Chiapas – was clear.  “Even though you consult thousands or millions (a reference  to Lopez Obrador’s much criticized public consultation on the Tren Maya), we won’t give up.  Even though you get permission from your ‘f——— mother’ we won’t be silenced.”

The warning was delivered to a crowd of around 12,000 people in Caracol de La Realidad in the heart of EZLN territory by commanders Berenice and Everilda, who  – among others – have replaced Subcomandante Galeano (previously Marcos) as the official spokespersons of the rebel group.

Marcos shot to international prominence when he declared war on the Mexican government on January 1, 1994, leading an insurgency which saw around 3,000 armed Zapatista insurgents seize towns and cities in Chiapas. Although the Mexican Army quickly forced the rebels back into the jungle and a truce was agreed upon, the EZLN has never lifted its declaration of war. Efforts to broker a deal between authorities and the rebels have met with some success (the San Andres accords of February 1996 eventually recognized the autonomous communities), but the EZLN has refused to disband and has decided not to become involved in the mainstream political debate.

In various communiques over the years, the Zapatistas have reiterated their support  for “all the exploited and dispossessed of Mexico,” and expressed their sympathy with the international anti-globalization movement, as well as the struggles of oppressed peoples, including the Palestinians.

Without mentioning specific actions they may take to block construction of the Tren Maya, Commander Everilda vowed to defend the “pueblos Zapatistas” from projects that “destroy humanity” and fail to respect comrades who have “fallen in our struggle.” She emphasized the differences between the autonomous towns – where political decisions are deliberated and decided in community assemblies – and the rest of Mexico,  which she said is compromised by national and global capitalists.

Lopez Obrador was a major target of ridicule for other Zapatistas speaking at this week’s  anniversary celebrations. Subcomandante Moisés called the new president “a manipulator” who tricks people into believing the population backs him. He also criticized the plan to create a National Guard, noting that  its predominantly military component means that it will be virtually indistinguishable from the armed forces.

Since taking office, the Lopez Obrador administration has stressed its commitment to advancing the rights of Mexico’s indigenous peoples, extending an olive branch to the Zapatista communities in particular.

Interviewed recently in Proceso magazine, Adelfo Regino, an advisor for the EZLN in the mid-1990s and now the director of the Instituto Nacional de los Pueblos Indígenas, emphasized that the Zapatistas’ fight has been “fundamental in the process of transformation and change that Mexico is now experiencing.”

Regino recalled that the rebellion 25 years ago broke out on the day that the North American Free Trade Agreement (Nafta) was signed into law. At that time, he noted, it came as a surprise to many that much of Mexico was mired in abject poverty at the exact moment the nation was about to enter the “modern age,” he said.

Regino stressed that the Lopez Obrador administration was committed to extending the constitutional recognition of Mexico’s indigenous peoples and their right to self determination.

In his daily press conference on January 2, Lopez Obrador said the negative comments of the EZLN leaders did not bother him.

“We live in a free country, there is no repression or censorship. We’re not going to confront any group; we want peace and reconciliation,” he said.“We are not going to do anyone harm. On the contrary,  we will listen to everyone and give preference to the poor.”