Painter Sadek Reynolds says that growing up, his mother crafted everything from dolls to crocheted rugs before her yarn store went under, only to live off of disability once her back gave out. 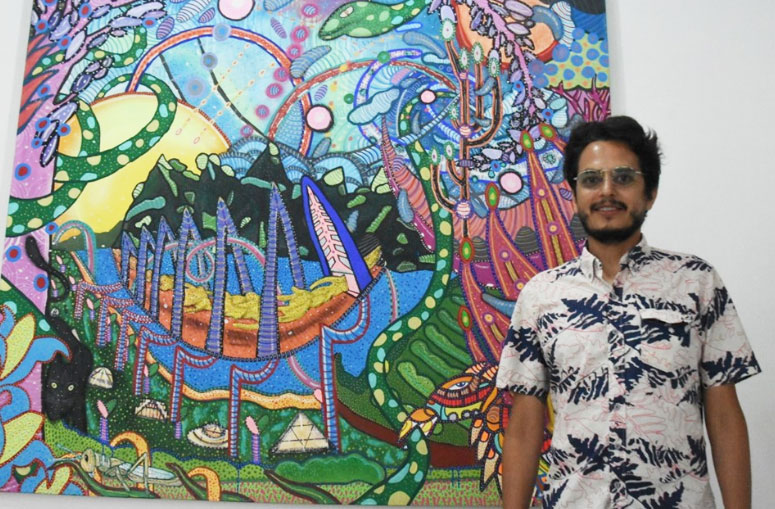 “With that starving artist mentality embedded in my memory, artists who transform their creativity into bona-fide careers always earn my utmost respect,” says Reynolds, a master of cosmic, geometric and fractal design, who resides in Guadalajara’s aesthetic Santa Teresita neighborhood but is originally from Mazatlan, Sinaloa.

Reynolds studied nursing at the University of Guadalajara before embarking on his current career path full-time a decade ago.

“I paint every day,” says Reynolds, who splits his time between creating art and raising his young daughter. “I also paint a mural every month or so, depending on the project.

Reynolds says he “really started learning how to paint” at the age of 17 at independent workshops with artists in their 60s.

He first exhibited in his mid 20s, and has since participated in shows across Mexico as well as in the United States and Panama.

Psychedelic, primordial and shamanic, there is something cathartic about Reynolds’ work. Viewers can practically cannonball into his dreamscapes, which are full of depth, immersive qualities and otherworldliness. Some pieces are what I imagine would adorn an acid den in Goa, India, known for its trance music scene.

“It’s visionary art,” Reynolds says. “Sometimes I like to be in altered mind spaces to create my compositions based on a certain experience I’ve had. My pieces are more or less what I have seen.”

Reynolds has participated in various collectives in Mexico but says the process is often complicated. 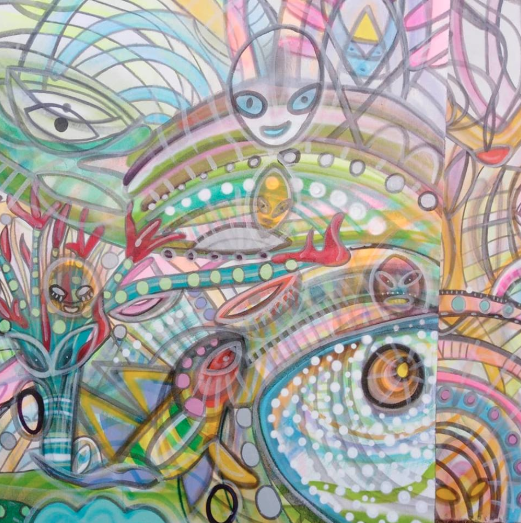 “The artist community is kind of fragmented. Although we all know each other, we don’t see each other that often. It’s segmented. I would like it to be more open so we could all work together.”

Reynolds enjoys the sense of collaboration and cooperation that comes from group work, which makes managing resources and contacting galleries less tricky and more accessible. Some of these partnerships have also helped Reynolds land state-sponsored jobs.

In the past, Reynolds has worked under a group known as Ruta Plástica that regularly collaborates with Jalisco’s Culture Department. This platform has allowed him to exhibit in dozens of municipalities in the state.

“The exhibits are almost always organized through a nonprofit which holds an open call from agencies to bring in the artists,” said Reynolds. “Artists never usually work directly with the government.”

“They also almost never pay on time,” said Reynolds. “Reimbursement is slow, especially with material costs for projects. Artists are usually the last to see these funds.”

There have also been opportunities to work with municipalities within the Guadalajara metropolitan area, although some pay better than others, he notes.

“While Tlajomulco is paying 50,000 pesos for a mural, there are projects in Guadalajara paying only 5,000. It really varies. The last time I worked with Guadalajara, they paid me half of what they were supposed to and it took them three months.”

Understandably, Reynolds prefers to work with the private sector rather than the government. Even if this is preferable, challenges sometimes arise in the interim between jobs or commissions.

“If you don’t sell a painting then you can’t pay the rent. There’s more work involved in budgeting between jobs than painting.”

Coming up, Reynolds will be installing a mural along the Guadalajara train tracks centered around immigration. With a team of about 15 others, they also intend to dispense food and provisions to the migrants they encounter.

“Not only are we going to be making this mural but also providing clothing, food, medicine, etcetera,” said Reynolds, who adds that the same project will take the team to Monterrey. “We’re hoping to make a true social impact.”

One of Reynolds’ most recent exhibitions took place at the “Pacha Moma” museum in Irapuato, Guanajuato. Showing his mystical side, he showcased 23 pieces in his show entitled “Instructions to Stop Falling into the Abyss of Uncertainty.”

In Guadalajara, some of Reynolds’ artwork is viewable at Plaza de Cardenas, Cruz del Sur, Mercado Juarez and Prisciliano Sanchez. This month, he will also install some artwork by the Juarez subway (Tren Ligero) station in Parque Rojo.