Cooking a Thanksgiving dinner can be a chore in a foreign land where recipes need to be changed to accommodate non-familiar products. But there are plenty of places where the basics and more can be purchased. 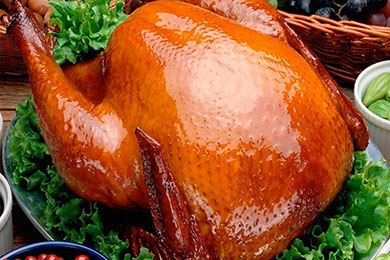 At Lakeside you can order your frozen turkeys at Puritan Poultry, Super Lake and El Torito supermarkets. One savvy chef says that Pollos Arraiga in the Chapala municipal market may have fresh turkeys available to order. Walmart had only smoked turkeys in their freezer case.

In Guadalajara, frozen or cooked turkeys can be ordered from La Casita Delicatessen in Providencia, tel. 3642-2471. In Mercado Abastos, call El Bistec de Oro at 3671-2860/3094 and ask for Jose Martinez to order frozen turkeys in English. Also at Abastos is Carniceria La Canadiense, tel. 3671-2004 with Adrian Solorzano.

For the cooks who don’t want to sweat in the kitchen all day, packaged stuffing mixes, canned cranberry sauce, packaged gravies and yams and pumpkin puree can be found at Lakeside in Puritan Poultry, Super Lake, El Torito and Casa Gourmet. Walmart only stocked canned gravy and dehydrated mashed potatoes, but did have various whipped toppings for pies, and a large package of pre-cut celery sticks. Dozens of gravy mixes and boxed stuffing options were available at Super Lake.

In Guadalajara, La Casita Deli on Av. Teranova stocks whole and jellied cranberry sauce, sweet potatoes, and pumpkin puree. Aladinos, also in Providencia, had canned yams and cranberry sauce. Abastos Gourmet, located in the retail section behind the eateries, also has the basics, but you can order whatever you need. Ask for Juan or Diego Muro.

Those who like to spend some time in the kitchen and pour over recipes will want to peruse the shelves of imported groceries at many of the stores mentioned above.

Super Lake grocery in San Antonio Tlayacapan has probably the best selection of imported goods in Jalisco on its shelves, although Goiti on Avenida Mexico in Guadalajara may give them a run for their money in this department. Dozens of spice brands from around the world and candy, cookies, crackers, nuts and favorite holiday snacks can be found there. Casa
Gourmet and Aladinos both had a nice supply of U.S. nuts and snacks. Super Lake was the only place that had fresh cranberries. For southern-style stuffing, Jimmy Dean bulk breakfast sausage and cornmeal are also on the shelves at Super Lake. La Casita had corn bread mixes available.

While you can pick up carrots, potatoes and yams in most large grocery stores, specialty vegetables are harder to find. We saw a good selection at Super Lake and the vegetable stands near Abastos Gourmet in Guadalajara. A friend at Lakeside swears by the quality and variety of vegetables at one stand run by two brothers in Chapala’s municipal market.

Aladinos and Casa Gourmet are exceptionally good stops for bakers looking for special flours, mixes, cake and pie tins, prepared frostings, Duncan Hines cake mixes, Crisco. Pie fillings were available at both stores. Super Lake had three varieties of jarred mincemeat in stock and we also found it at Casa Gourmet. Walnuts were only available at Super Lake, as was Land-o-Lakes brand whipped topping and prepared dried fruit mix for fruit cakes.

Real maple syrup for that special pecan pie can be found at most of the stores mentioned above.

Fruitcakes were available at La Casita Deli and Super Lake.

What is Thanksgiving without the post-meal game and the libations and snacks to accompany it? La Casita Deli has by far the best imported beer selection of the stores mentioned here, and even some local brews we have yet to see in specialty stores in the metro area. Super Lake has a fair selection of beer and U.S. soft drinks and a large selection of juices. We noted three kinds of both U.S. brand apple juice and  ginger ales on the shelves.

A variety of north-of-the-border-style chips and crackers were in evidence at Super Lake, La Casita and Aladinos. U.S. brand nuts were on the shelves at those stores and also Casa Gourmet. La Casita and Super Lake had ample selections of imported cheeses on hand.