Guadalajara’s most popular sporting son, soccer player Javier “Chicharito” Hernandez, has made what he calls his “dream move” to Spain’s Real Madrid, one of the richest clubs in the world. 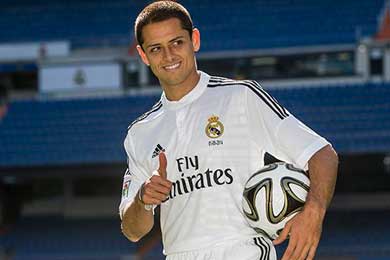 Manchester United agreed to loan Hernandez to the current European champions for the 2014-15 season with an option to make his transfer permanent next summer.
Hernandez had lost favor with Manchester United’s coaches since long-term manager Alex Ferguson stepped down after the 2012-2013 season.

The striker scored only four goals last term, when he spent most of  his time as a substitute, making only rare appearances as a starter.

Hernandez played 81 games for Manchester United, 43 as a starter, scoring 37 goals.  His record for the Mexican national team is 33 goals in 66 games – an exceptional rate of return.

Hernandez, however,  faces a tough task in securing a starting berth at Real Madrid, a team filled with world-class stars, or galacticos as they are known.   Pundits speculate that he will be mainly used off the bench, as an impact substitute late in the game, if goals are needed.

“To wear this jersey is a dream come true for any player in the world,” Hernandez said after his move this week. “One knows what this club represents.”
Real Madrid is the arguably the world’s most successful soccer club and won its 10th European Champions title (el décimo) in May.