The momentum is clearly with left-of-center candidate Andres Manuel Lopez Obrador, who is increasing his lead over his rivals in the presidential race, polls suggest.

The Reporter was started in 1963 by a journalist from Eugene, Oregon.

Leftist presidential frontrunner Andres Manuel Lopez Obrader weathered a barrage of attacks from his rivals at last Sunday’s first televised debate, which focused on governance and security, corruption and democracy.

Four of the five states registering the heftiest increases in violence in 2017 are not governed by the Partido Revolucionario Institucional (PRI), José Antonio Meade, the party’s nominee for president, pointed out during his first visit to Guadalajara at the end of last month.

Several decades ago, not long after I arrived in Mexico, I was strolling down Guadalajara’s Avenida Federalismo and struck up a conversation with a rather down-at-heel man, probably in his early fifties. It turned out he was from Guatemala and living in a refugee camp in Michoacan, Jalisco’s neighboring state.  His motive for coming to Guadalajara was to meet a public official who, he had been informed, might help draw attention to the plight of Guatemalan refugees in Mexico.

The official was far too busy to see his humble visitor and the Guatemalan was sent packing smartly. The hangdog expression on the man’s face as we walked down Federalismo told the story. Then he mumbled something that stayed with me long after we parted company. “If I had been a woman, they would have treated me decently. Men get no respect here. We are the dregs of society.”

Later, I pondered this comment. Was it simply the mutterings of a man insulted by an uncaring bureaucracy or was there a deeper lesson to be learned?

Anyone who has lived in Mexico for some time cannot help but notice that Mexican women still struggle to gain a foothold in important sectors of society where power resides firmly in the hands of males. Politics, industry and the legal profession are but three of these. The domestic scene offers an even bleaker picture. Many husbands still force their wives to stay at home, even though they give them barely enough money to meet their day-to-day living expenses. When women do work, employers usually pay them lower wages than they would a man.  With women in many developed nations, including the United States, still battling for equal pay, imagine how much longer it will take for Mexican women to get parity. 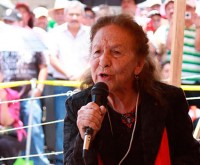 Considering this, why did I pay any attention to a bitter man shuffling his way along a city avenue?  Don’t the Spanish textbooks tell me that the word padre is used colloquially to mean something wonderful while madre refers to something awful? Surely women in Mexico have had a huge cross to bear ever since as Aztec daughters they were given away as gifts?

I am reminded of the words of a female teacher in Guadalajara. If memory serves me, her comments went something like this: “You know it’s women who really wear the pants in Mexico, because it’s women who keep families together, feed the kids and lead by example. Women can’t rely on men, so they find inner strength that men will never have.”

That’s not far off the mark. The opinions of women in Mexico are often more respected than those of men.  It’s not men who have to deal on a daily basis with a changing economy and a depreciating cost of living. And when it comes to wisdom, women seem to have dollops, where los hombres often come up short.  Ask yourself why 80 percent of Mexico’s primary and secondary school teachers are women?

Imagine if a left-wing male had taken up the mantle of the desaparecidos (disappeared activists in the 1970s) instead of housewife Rosario Ibarra de Piedra, who was searching for her missing son. Would the Mexican people have warmed to this cause so wholeheartedly?

All this might seem hard on some Mexican males; not all are irresponsible good-for-nothings who waste the weekly household money on futbol and booze.  But, if truth be told, Mexican men can’t hold a candle to the fairer sex when it comes to running a home, educating children and making ends meet.  And, for that matter, probably running a country or a multinational corporation, too.

Should we be grateful that President Donald Trump had an “epiphany” and decided to change his mind about pulling the United States out of the North American Free Trade Agreement (NAFTA)?