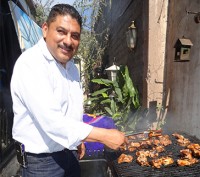 Hector España mans the grill on Sunday, December 6, for the first Sunday brunch service in his Manix Restaurant’s history.  After nearly three decades of Sunday closures, the family restaurant in Ajijic now allows Sunday guests to choose from barbequed meats with slaw, potato salad and beans, or a lighter menu featuring salads and omelets.  Local musicians entertain diners while they enjoy the food.

A delegation from Jalisco looking to expand its agribusiness trade with Russia arrived in the world’s largest nation this week.

Want to watch – or even take part in – a wild, adrenaline packed activity that is taking the internet by storm?

The state’s charity watchdog, the Instituto Jalisciense de Asistencia Social (IJAS), has launched its annual altruism prize to highlight organizations that are doing stellar work in their respective fields, as well as provide them with a cash stimulus.

An 80-year-old man from Tabasco died during the first major storm of the rainy season on Thursday, June 11.