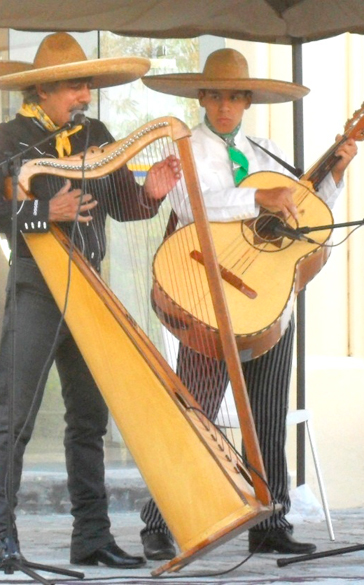 The rousing strains of traditional Mexican music will raise the rafters at Chapala’s Centro Cultural Gonzalez Gallo (CCGG) during the Encuentro de Arpas, Salterios y Mas (Festival of Harps, Psalteries and Other Acoustic Instruments) scheduled for Tuesday, June 18, from 2 p.m.

The off-beat musicians’ festival will bring together talented ensembles and soloists from Jalisco and beyond performing the melodies of yesteryear on the Mexican folk harp, psaltery and other acoustical instruments. It is a unique encounter that doubles as a lively entertainment event for music lovers and a sharing-and-learning experience for the performers. As the event progresses into the evening hours the musicians begin mixing it up for improvised jamming on favorite tunes, maintaining a relaxed party atmosphere that prevails until everyone runs out of juice.

The concept originated with a gathering of folk harp players held in the village of San Miguel Cuyutlan, near Cajititlan, in October 2007. Raygoza first brought the event to Chapala in the spring of 2009, booking repeats every year since then.

Stellar combos slated on next week’s bill are La Orquesta Tipica de Queretero, Mariachi Pitiyal from Michoacan and Guadalajara’s Son y Fandango – a group that interprets the original mariachi tradition with an all-string band creating the sound backdrop for dancers tapping out steps on a wooden sound box.

Admission is free of charge. Spectators may come and go as they please and are welcome to bring whatever beverages and snacks they choose to consume and share with others.

The CCGG, housed in Chapala’s former railway station, is located on Avenida La Cristiania, two blocks off Avenida Pepe Guizar and the junction with the highway to Mezcala.