In an interview with the Reporter in 2010, Diana Kennedy, regarded as one of the foremost authorities on Mexican cuisine who has died at the age of 99, summed up concisely her attraction to preserving the traditional methods and foods of her adopted homeland: 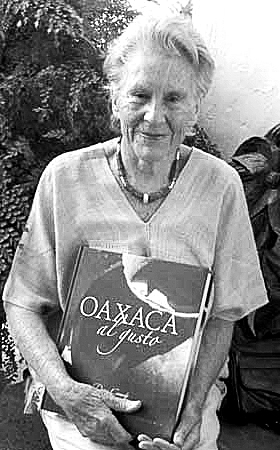 “Every recipe has a story. Understanding the stories behind the recipes from different parts of the country is what I love.”

Cooks throughout the world, both celebrated and unheralded, this week acknowledged the contribution that Kennedy made over more than five decades to widening the perception that Mexican cuisine has so much more to offer than tacos and burritos.

Kennedy was born in  Loughton, Essex, England in 1923, the daughter of a salesperson father and schoolteacher mother who “took pride in the ‘Mrs. Beeton’ method of family cooking.” In World War II she joined the Women’s Timber Corps, a civilian organization that took over forestry duties from men who had gone off to fight.

Kennedy emigrated to Canada in 1953, working in various jobs that included running a film library and selling Wedgwood pottery. Never a young woman to remain still for long, in 1957 she made a spur of the moment decision to visit Haiti, where she met New York Times reporter Paul Kennedy, who was on assignment there. He was then transferred to Mexico to take up the paper’s post as Latin America correspondent.