Think green – the sixth annual Eco Race and Green Market are scheduled for Sunday, March 31 at Guadalajara’s American School Foundation. Everyone is welcomed to this event meant to raise awareness about conserving the planet’s resources. Expect to learn a lot about recycling and reuse techniques.

While not as beloved as tacos or tortas ahogadas, ramen is becoming increasingly popular in Guadalajara.

Bars will be packed the evening of Saturday, February 18 as local soccer favorites Chivas take on their huge Mexico City rivals America in the game referred to as El Clasico. After six games of the season, Chivas are in fourth place in the 18-team table.  Kick off at Chivas’s Omnilife Stadium is 9 p.m.

Dog lovers should head over to the Parque Italia in Colonia Providencia along with their pooch/es Sunday, December 4 for the annual Croqueton Navideño.

One of the main aims of the event, from 10 a.m. to 6 p.m., is to receive donations of dry food (croquetas) for abandoned dogs and cats. (Bags will be on sale for donation.)  As well as vendor booths with pet-related material, dogs will be up for adoption, a statue to the “Abandoned Dog” (Perro Abandonado) will be unveiled in the park at noon, 50 free sterilizations will be carried out (call 331-205-7546 for prior reservation) and talks on pet care will be held.  Skillful canines will give demonstrations their abilities, while an unusual “parade” of elderly and disabled dogs is also on the schedule.

Parque Italia (also known as the Parque de los Perros), is at the corner of Montevideo and Milan.

Amateur astronomers and interested parties are invited to participate in the “Night of the Stars” (Noche de las Estrellas) event in the Parque Metropolitano on Saturday, December 3.

More than 50 telescopes will be provided for the public to peer into the night sky, including two models with sufficient range to observe distant constellations and galaxies.

The late afternoon/evening event, organized by the Sociedad Astronómica Guadalajara and the Alianza Francesa de Guadalajara, starts at 5 p.m. and will include a conference, a film showing and workshops for children and adolescents.  A large crowd is anticipated. 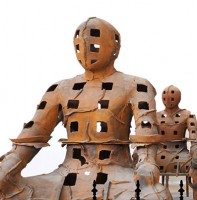 Jalisco and India have much in common, and many opportunities for shared cooperation, especially in the high-tech sector, Jalisco Governor Aristoteles Sandoval said Monday after meeting this week  with Indian Foreign Minister Vijay Kumr Singh (above left) in Guadalajara.

The number of Indian citizens now living in the metropolitan area has grown substantially since the India’s largest conglomerate, Tata, set up an IT  business in the city.

Tickets for all shows at the Teatro Degollado may also be purchased at the Teatro Alarife Martin Casillas, a smaller venue operated by the Jalisco Secretariat of Culture, just off La Normal Glorieta. Their box office is open Monday through Sunday, from 10 a.m. to 3 p.m. and 4 to 7 p.m.