If there was ever a year where new healthy, vibrant and passionate energy is needed, it is 2021.

While 2020 has been a rollercoaster of emotions, I prefer to focus on everything to be grateful for.

I’m not sure what excites me more, watching whales breaching, looking out to the ocean, or all of the events happening on the north shore.

Can you imagine Mexico without tacos? They’re one of the mainstays of Mexican culinary tradition and popular culture.  How could we live without them?

I’m delighted to introduce myself in this, my inaugural article for the Guadalajara Reporter.

Colectivo Tomate is an organization created in Puebla in 2004, with a mission to inspire action for social transformation. In 2009 it created the Ciudad Mural project, which aims to generate an encounter and connection experience between people through dialogue and art. The project impacts the public space through the collective creation of murals, in order to activate social participation and community empowerment.

Salvador Garcia, or Chava as he is known by his youthful team of local and international artists, is the project director of the Ciudad Mural group in the northshore town of La Cruz de Huanacaxtle.

“We have transformed the walls of dozens of La Cruz homes and businesses into works of art,” he said after a marathon two weeks of creative frenzy.

Collective Tomate seeks to tell the stories of the communities they visit and transform spaces that might otherwise be forgotten. They begin by selecting a town and recruiting artists willing to donate their time and talent. Local families are then interviewed, before the artists tell their stories though interpretive murals.

The group considered a number of towns in Bahia de Banderas, including Sayulita, San Pancho and others.

“We determined that in La Cruz, we had the best fit, and that our impact here could be most significant,” Garcia said.  “La Cruz was chosen because it has a great history as a hardworking pioneer town. Families of fishermen, farmers, caleros, and so on.

“However, the town is now in transition, adding tourism as a significant socio-economic aspect of life here. Our murals project serves as an opportunity to showcase and honor the collective history of La Cruz.”

Of the 23 painters, all but four were Mexicans. There were also more than 100 support workers – advance team, coordinators, public liaisons, food and accommodation people and so on.

Thirty murals were completed, encompassing an area of 1,300 square meters.

“The owners of the buildings are not obligated and in some ways not able, to keep them in prime condition,” said Garcia. “The paintings receive a final sealer once complete, but some wear will occur over time. And of course, we trust that the images will be respected by all.  So, we ask that you adopt and care for them.” 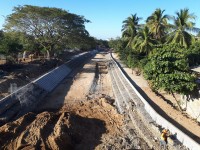 Thanks to Garcia and his team, to Comex Paint and to the municipality of Bahia de Banderas for its support.

They will have a special menu, in addition to their usual offerings.

The funds will be split equally between Kids Club programs/summer school, dental, recycling and eyeglasses.

Each year Bodega Circo is transformed into an elaborate stage to showcase the talent of young students, with intricate costumes, decorations, lights and projections, music and choreography.

The event is produced by Gilles St. Croix, one of the founders of the world-famous Cirque du Soleil, and co-designed by Monique Voyer, who founded the project in 2011.

This is the eighth fundraiser for this non-profit organization, designed to encourage the artistic, technical and personal development of local children through the circus and dance arts.

Tickets are 600 pesos each. Dream Catcher, yearly sponsorship tickets, are available for 2,500 pesos.

Information about the Circo de los Niños can be found at https://circodelosninosdesanpancho.mx.

With the arrival of the Easter and Semana Santa holidays in early April, the yearly tradition of snowbird departure ramps up, and at the same time closes out the season of charity events and community service group fundraisers.

There are two events, in addition to the Bucerias Children’s Library fundraiser (story below), to help bring the season to an end.

• Sunday, March 22, the Tree House Bar and Grill in La Cruz will feature Jesse Bradman, an acclaimed singer and keyboardist, and the Flaming O’s Band to help the building fund of Casa de La Paz, a care home mostly for low-resource Mexican seniors.

Bradman has recorded and performed all over the world with rock bands, including Eddie Money, Night Ranger, Poison, UFO and many others. His voice and keyboards can be heard on numerous commercials and television shows.

“What a super night this will be,” says Marilyn Moxin, who, with her husband Jim, has been working tirelessly for almost seven years to get the home built.

The entertainers have donated their time to perform and Tree House will donate a major slice of the cover charge for the show to the building fund.

In addition to the performance, there will be a promotion on buckets of beer, as well as raffles and 50/50 draw.

The breakfast is Wednesday, March 25, 8:30 a.m. at the Hotel Villa Varadero in Nuevo Vallarta. The donation is 300 pesos.

“Yes, we will be offering the Saint’s Punch Bowl, a concoction of Jameson’s whiskey and dry cider originally created by the Jameson Distillery in Ireland. They still serve it each year at their annual St. Patrick’s Day bash.

“One of our volunteers was trained at the Jameson distillery in the art of the perfect Irish coffee.  She will be the showing off her knowledge of making authentic Jameson Irish Coffee after dinner,” says Appelbaum.

A full cash bar will also be available. The cost is 400 pesos per person, beverages not included.

The event will be held at Rhythm & Blues Lounge, Av. Mexico 26, in Bucerias centro.

Cocktails will be served starting at 6 p.m., then dinner is served at 7 p.m.

Proceeds from this benefit will go directly to support the library and its mission.