Citizens have stepped up to the plate and responded en masse to Tuesday’s deadly earthquake by flocking to donation centers (centros de acopio) with medicines, food, water, blankets and other basic supplies.

Distressed by the horrific images of the quake’s aftermath that have circulated on television and social media this week, many are also depositing funds in bank accounts set up by different organizations, both private and governmental.

Thanks to a few corrupt officials, some donations of materials and money never found their way to the victims of the 1985 earthquake, which is why this time around many Mexicans are cautious about where to make their contributions.

In times of tragedy, the biggest recipient of donations has always been the Mexican Red Cross, part of the internationally respected non-profit, non-governmental organization.  They are usually renowned for their honesty and have established collection centers at all of their facilities in the state, with the biggest one located at Cruz Roja Jalisco headquarters, at Calle San Felipe 7, adjoining the Parque Morelos in downtown Guadalajara. 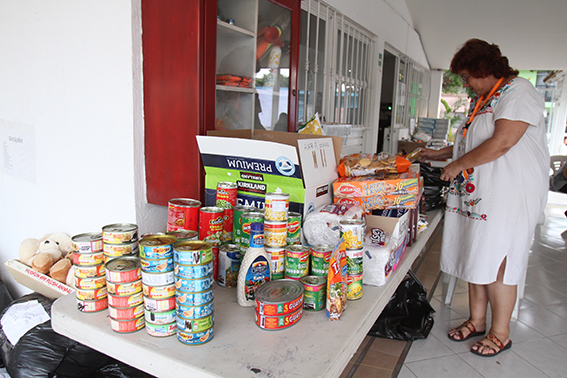 While some notable figures – journalist and women’s rights activist Lydia Cacho is a prominent one – have advised citizens not to donate to any government organization, the Family Development Agency (DIF) social welfare institution has a good record of getting supplies quickly to the their intended destinations.

Meanwhile,  a slew of organizations and groups, including schools, universities, churches, retailers, malls, government agencies and private citizens, have joined in the relief effort and are requesting donations.

For those truly concerned that materials might be intercepted by corrupt officials en route to their destinations and resold, donors are being advised to select non-perishable food items in easy-open packaging and use indelible markers to black out bar codes and write on messages of moral support on all commercial goods.

There are various options for those wishing to make financial donations to the earthquake relief effort.  Donations to the Red Cross bank account can be made online at https://cruzrojadonaciones.org, or  at BBVA Bancomer branches (clabe: 012180004040404062).

The Lake Chapala Society (LCS) in Ajijic says it has done its homework and suggests making Mexican earthquake donations to either Direct Relief (directrelief.org) and GlobalGiving (globalgiving.org), two U.S.-based charities that have received the highest four-star rating by Charity Navigator. Alternatively, LCS suggests making donations to the Brigada de Rescate Topos, the Mexican disaster relief group  which was founded after the 1985 earthquake in Mexico. (Direct deposit to Santander 92000709294 014180920007092942 or Paypal: This email address is being protected from spambots. You need JavaScript enabled to view it. topos.mx.)

Meanwhile, telecommunications tycoon Carlos Slim, Mexico’s richest man, has offered to donate five pesos for every peso donated to the earthquake effort.  Donations can be made at Banco Inbursa branches, via Telmex by dialing *5566, or by sending a Telcel text to 5566 (in denominations of 100, 200, 300 and 500 pesos).

Centros de Acopio are popping up all over the place in the Lake Chapala area and are too numerous to mention here The most reliable points would be: