Jalisco state authorities have issued a child abduction emergency alert (Alerta Amber) after a 15-year-old U.S. citizen went missing on the outskirts of Jocotepec, the town located on the western edge of Lake Chapala.

Kristopher Michael Kilough failed to return home after stepping out April 4 to walk a few blocks to an Oxxo corner store to purchase milk, his uncle Jeff Bell told the Guadalajara Reporter. Kilough had moved to Mexico to live with his grandmother and two uncles around a year ago, after his father died, Bell said. 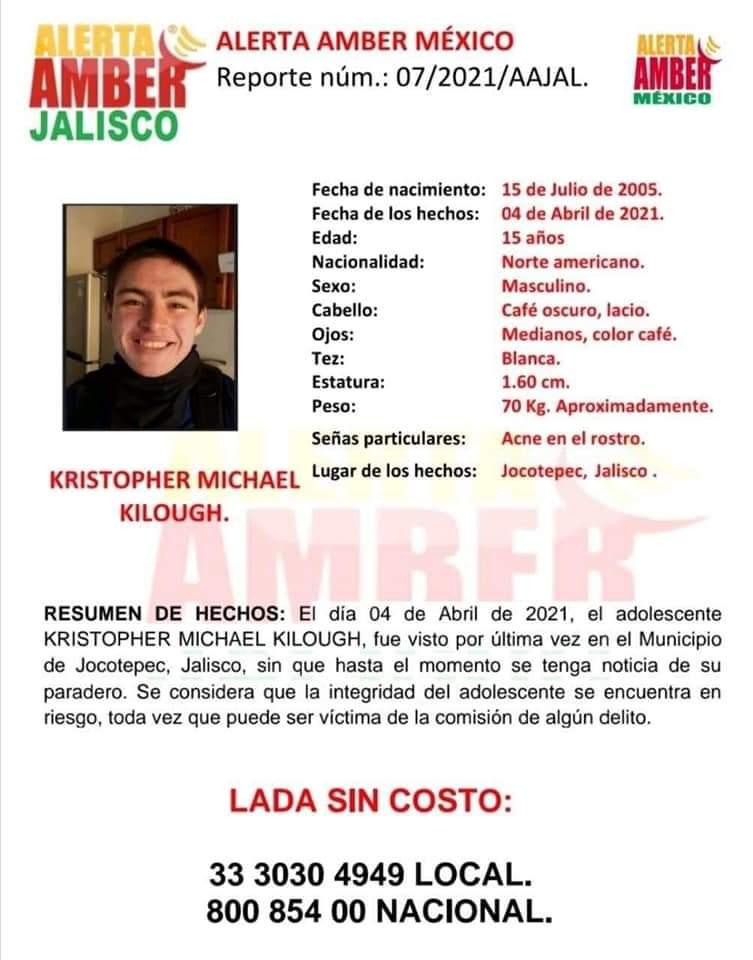 When Kilough failed to return home, his relatives tried to call his cellphone but it was turned off. This was not unusual, Bell said, and the family at first presumed he had decided to go and hang out with friends.

Noting that not returning home that evening was “completely out of character,” Bell said the next day, on April 5, his brother received a text message from Kilough´s phone saying he was at the Chapala boardwalk and that he would be home by 6 p.m. When he failed to turn up, they drove the ten kilometers to Chapala but found no trace of him.

Bell said he has doubts the message was sent by his nephew, calling it “strange” because of the kind of language used. Kilough does not speak Spanish, he said.

The amber alert was issued after the family contacted state authorities authorities. The U.S. embassy in Mexico City is also fully aware of the situation, Bell said.

Bell said they have scoured the local area for potential witnesses, and put up around 1,000 fliers seeking news in different parts of the north shore – on lamp posts, bus stops, gyms and in other public places. Six video surveillance cameras located in the area where Kilough disappeared had not been working for some time, he was informed.

On Monday, April 12, eight days after his nephew went missing, Bell said the family have yet to receive any news from authorities about advances in the investigation.

Bell said Kilough likes to work out, is muscular and looks much older than his 15 years. He has dark hair, brown eyes, is 1.60 meters tall and weighs around 70 kilograms.